100 Thieves advance to Grand Finals of VCT after defeating Envy 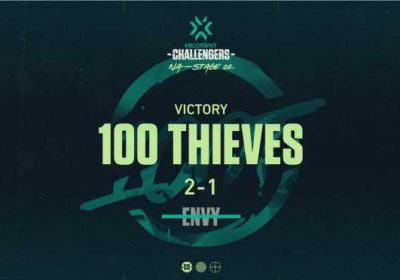 100 Thieves advance to the Grand Finals of the Valorant Champions Tour Stage 2: Challengers 1 after a 2-1 victory over Envy. Envy fall to the Lower Bracket of the tournament after a one-sided matchup against a dominant 100 Thieves.

100 Thieves have gotten their footing as a team after replacing Quan “Dicey” Tran with Ethan “Ethan” Arnold before Masters. They were performing poorly with Dicey on the roster and struggled to fit their players into different agent roles. The squad continued to experiment with different agents during Masters but have now landed on a solid composition with Ethan.

100 Thieves blow Envy out of the water

Envy picked Bind for the first map of the series which meant that 100 Thieves could start on defense. With the defensive advantage, 100 Thieves held Envy back early in the game and went up 9-3 at the half. Envy also struggled on defense and 100 Thieves closed the game out 13-3.

It’s @100Thieves who take the series 2-1 and secure their spot in the #VCTChallengersNA Grand Finals!

Lower Bracket up next:

After a dominant first map, things weren’t looking good for Envy going into 100 Thieves’ map pick Ascent. However, Envy jump ahead with a 9-3 lead this time at the half. 100 Thieves quickly answered back with a strong second half of their own to push the game to overtime. Despite having the momentum advantage in OT, 100 Thieves failed to get a round and gave the map to Envy 14-12.

Haven was the deciding map of the series and saw 100 Thieves take an early aggressive lead. Similar to Bind, Envy was unable to secure a round in the second half. That lead 100 Thieves to end the series 13-4. While Ascent did go the way of Envy, 100 Thieves obliterated them on the other two maps in the series.  100 Thieves’ Peter “Asuna” Mazuryk was the MVP of the match after going 74/45 between all three maps. Ethan was close behind him going 50/33 overall despite being on a healing agent, Sage.