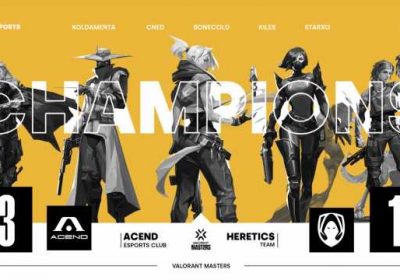 Acend took down First Strike champions Team Heretics to take the first European Masters title 3-2 on March 21. The series was a back-and-forth affair as the two teams traded maps all the way to the deciding game on Ascent. Acend was led by their Jett player Mehmet Yağız “cNed” İpek who had multiple clutches and aces for his team in the series.

Acend came into Masters as a relatively unknown squad. The team was formed in the first few weeks of 2021. It was then signed by Raise Your Edge in January and was acquired by Acend after the squad qualified for the Masters event. Acend, led by its Spanish in-game leader Jose Luis “koldamenta” Aranguren Herrero, made it through the group stage of the event by upsetting Ninjas in Pajamas. It continued that upset streak into the playoff stage, knocking out tournament favorites FunPlus Phoenix and Team Heretics to take the Masters crown.

The five game series started on Split where Team Heretics took the map in convincing fashion, 13-7. Acend responded by taking the next map, Bind, off of some great individual plays by cNed and tactile walls by Vladyslav “Kiles” Shvets on Viper. Team Heretics responded by securing its second map on Haven, 13-9.

On Icebox, map three, both teams came out swinging but Team Heretics held the lead. They were one round away from securing the Masters title. The team had a 12-9 lead, off the back of Žygimantas “nukkye” Chmieliauskas and his 33 kills, but failed to close out the series. Acend forced overtime and took the map 14-12. Acend then closed out the series 13-11 on Ascent. The team put the series away before Team Heretics could force overtime in the final few rounds.

Both teams put up massive numbers and statistics across all five maps. But, cNed and nukkye were the best performers by far with the two putting up 111 and 99 kills respectively.

With the win, Acend claim the first Masters title in the region. The team also secures itself 100 circuit points towards Champions qualification and the next international Masters event.