Home » eSports » Dota 2: Is the Outlanders Update the most unpopular update yet?

Dota 2: Is the Outlanders Update the most unpopular update yet?

A drop off in players, balance problems, and negative opinions. Is the Outlanders Update our most unpopular Dota 2 update?

The Outlanders Update, Patch 7.23 which went live late November last year has been something of a controversial update since its release.

7.23 completely changed the face of Dota 2, incorporating new RNG mechanics like item spawns from neutral jungle camps, outpost objectives which can increase a team’s vision and map control. The number of bounty runes was bumped up. 7.23 even gave every player their own courier in normal games. (Something which was already a mechanic in Turbo mode.)

When the patch first dropped, I was excited about it. I thought that the changes IceFrog had implemented were a chance to make the game more approachable for new players, and maybe bring a bit of freshness back for old players too.

But, I’m not too proud to admit when I was wrong.

Plenty of critical commentary has been shared, from both casual fans and those involved with the DPC itself.  Which begs the question; is Outlanders the most unpopular Dota 2 update we’ve had?

Well, if the top voted conversations on reddit are anything to go by, the majority of the Dota 2 community are not happy. Even after multiple hot fixes to try and adjust some of the balance issues the patch has brought.

“This patch feels like nothing matters outside of deathballing, spamming buybacks and mandatory timers (outposts, runes, Roshan).” Reads one thread. Over the course of the 129 comments, the majority of users respond in the affirmative.

“Facing a Tiny with 3k hp 18 mins into the game.” Reads one response, “now with some luck, a neutral item or two literally could “fix” any shortcomings that made a hero balanced,” says another.

One thread, just over a week old, calls the current meta unplayable in high MMR matches.
“Every hero walks around with 1,5k HP at level 9-10 on top of getting free neutral items, etc. so burst heroes are absolute trash, and comebacks in the way of good skill usage are rare because people are just so damn hard to kill.” Reads the OP. The thread has 2.3k upvotes and 1.2k comments.

And that’s just a small sample of the negative comments that casual players and fans of the game have been throwing out on social media.

But what’s good for the gander, isn’t always good for the goose. So, let’s take a look at the influence 7.23 has had on the DPC before we relegate it to the realm of worst update ever.

Muriëlle ‘Kips’ Huisman, a former CompLexity Gaming coach and well-respected Dota 2 analyst, penned a piece about the impact of patch 7.23 on the pro scene back when it launched. In particular, the neutral items.

The argument Kips presents suggests these changes, especially neutral items, are great for casual players. But that they also present an unfair challenge for professionals, who are depending on the game for their livelihood. The added random element diminishes their skill in favour of chance. It’s a compelling argument, and certainly it has its merits.

As Kips argues, the most valuable skill a player has in a game of Dota 2 is anticipation – that is the ability to determine what could happen. Not adaptation – reacting to what did happen.

She simplifies it for us pretty well; “a good player buys a BKB after he loses a teamfight because he got disabled and killed. A great player buys the BKB before this happens and never loses that one fight at all.”

Kips breaks it down pretty cleanly;

“Anticipation requires knowledge of possible scenarios. It requires experience to determine which of these scenarios are most likely to occur, and which ones are most dangerous.”

But the Neutral Items are a wholly random element. No one knows what will drop, making it impossible to try and strategize a counter ahead of time. Furthermore, as Kips points out, your enemy team already has that neutral item in their kit when it’s revealed. Forcing you to be adaptive, rather than anticipate.

It’s important to take into consideration the opinions of people like Kips who have such a close relationship with the DPC. We’ve seen plenty of adjustments to the neutral items rolling out since the patch too, which shows that Kips was on the money when she said that balancing them should be a priority ASAP.

We’ve now seen a few events play out with the new changes. Including the regional qualifiers for the Leipzig Major, the recently wrapped Bukovel Minor and the One Esports Dota 2 World Pro Invitational in December of last year.

PSG.LGD out in open qualifiers?

The first sign that Kips might be on to something arrived with our open qualifiers for DreamLeague Season 13 and the Leipzig Major. PSG.LGD were knocked from the qualifiers after suffering a shock defeat against FTD.apollo.  LGD are widely regarded as one of the best teams in the world, and one of the top teams in China. FTD.apollo on the other hand, are an up and coming team without a great deal of major LAN event experience under their belt yet.
Without discrediting the performance of FTD, this series was played just two-days after patch 7.23 dropped. So, it’s worth looking at what new mechanics helped give FTD.apollo their advantage.

This is the free value that FTD.apollo were rocking in their kit by 25-minutes into this Bo1.
After the 25-minute mark when the Tier 3 neutral items started dropping, they added a Craggy Coat for Veno and a Helm of Undying for Lich. 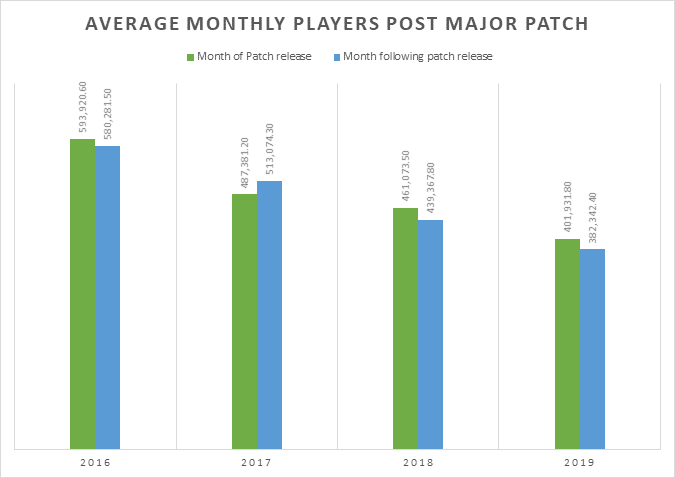 We always see a lull in the concurrent player numbers between patches. But usually big post-TI patches that bring new heroes and new mechanics see a substantial increase in active players. They bring players back to the game, even if they don’t draw new blood in.

If Valve were hoping to reinvigorate the community and draw in new players with the changes made in 7.23, it doesn’t seem to have worked.

Dota 2 reached its all-time highest number of unique players back in March 2016, with 1.29 million players logged in at the same time. Between 2015 and 2016 Dota 2 managed to increase the player base by roughly 3 million monthly active users. However, this growth dropped off after the launch of Steam’s PlayerUnknown’s Battlegrounds, another Valve title available through the Steam client.

In 2019 concurrent player numbers had plateaued at around 11 million monthly users, according to data available from Statista.  This figure doesn’t match up too neatly with stats available from Steamcharts however, so it is difficult to say if those 11 million users are actively playing every month.

Compare this to say League of Legends or Fortnite, both of which reach concurrent player numbers of 8 million – daily.

If you were an investor, which esports scene would you drop your dollars into?

No Profits and No Players?

There is an important factor that connects the DPC and the casual player base of Dota 2. And no, I’m not talking about how we all spammed carry wisp in our pubs after TI 9.

I’m talking about the very thing that makes esports viable as a professional occupation.

Even the most diehard Dota fans have to admit that the player base for the game has become static. How and why does this affect the DPC? Money, of course. While The International might still draw a large viewership, and boast one of the largest prize pools in esports, that doesn’t mean it sees the same kind of investment from outside sources that other titles receive.

According to a 2018 article from Forbes, bankers were valuing League of Legends franchises at $50 million USD a pop. Overwatch League franchises were going for between $60-80 million USD. Valve and Dota 2 and investment value rates in the DPC didn’t rate a mention in the piece; The World’s Most Valuable Esports Companies.

And if we look to viewership ratings, even the popularity of The International, the jewel in the DPC crown is low. TI 9 saw an average viewership of 726,000 people tuning in to watch. The average viewers for the Fortnite World Cup was 1.1 million. Though both these stats don’t take into account those watching from China’s streaming platforms.

While the Outlanders Update can’t be blamed for low viewership at TI 9, it doesn’t seem like it’s going to help improve that stat for TI 10.

Many of the players who’ve commented on social media about the problems with 7.23, and their dissatisfaction with the state of the game currently have been on this Dota journey since Shadow Shaman was Rasta. They’re unhappy and even if they’re not publicly posting about it, they’re showing it by logging off.

The only question left really, is if Valve are taking notice.