Alongside the partnership announcement, Flyquest also revealed its new jerseys. Mastercard’s logo will be featured on FlyQuest’s League of Legends jerseys throughout the 2022 LCS Season. 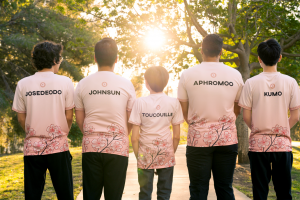 Tricia Sugita, CEO of FlyQuest, commented: “We have always been committed to ensuring that any partner that joins the FlyQuest family must match our values, which is why I’m so thrilled FlyQuest is partnering with Mastercard. Together, FlyQuest and Mastercard will be bringing a synergistic partnership that emphasizes our shared values.”

Mastercard first entered the esports scene in 2018 by becoming the first-ever global sponsor of League of Legends, as well as launching initiatives such as the Play of the Week.

In 2021, Mastercard was a partner of the League of Legends European Championship (LEC) for the 2021 Summer Playoffs. The deal saw Mastercard bring its Play of the Week segment during the competition.

As for FlyQuest, the organisation announced a shift towards manufacturing environmentally conscious and eco-friendly apparel in November 2021. It committed to making all future merchandise from 25 percent or more recycled and sustainable materials.

Esports Insider says: Seeing Mastercard’s relationship with Riot Games, it’s not surprising to see the company partner with FlyQuest for its League of Legends teams. It will be interesting to see the two companies course of action for the upcoming 2022 LCS Season.