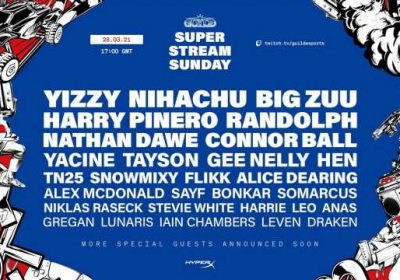 The United Kingdom-based organization known as Guild Esports is making waves in the esports industry. Co-owned by football superstar David Beckham, Guild has compiled arguably the best roster in competitive Fortnite Battle Royale. As well as counting teams in VALORANT, Rocket League and FIFA under their banners. The European brand is growing at an astounding rate outside of esports as well. Guild just signed a multimillion-pound sponsorship deal with the sandwich restaurant chain Subway. To cap off a successful week, the organization announced their first-ever Super Stream Sunday — a gaming festival featuring a blend of superstar acts and content creators.

What is Super Stream Sunday?

Guild Esports’ inaugural Super Stream Sunday is a five-hour live event; viewers can expect a mixture of well-known European celebrities partake in some gaming action. Those included on the list are British musicians Tom Grennan, Conor Maynard, Talia Mar, Yizzy. Joined by them are Guild Fortnite players Hen, Flikk, TaySon and Anas. The Super Stream Sunday features games like Fortnite Battle Royale, FIFA, Rocket League and more in multiple hour-long segments with a different game in each. Guild’s Director of Brand & Content, Danny Lopez, spoke about his excitement for the online festival.

“It’s been a dream of mine to create a festival style extravaganza that showcases all of Guild’s talent, and merges all aspects of youth culture; music, sport & entertainment,” he said. “Super Stream Sunday brings that dream to life, enabling us to share entertainment with people from all different backgrounds & interests through the power of gaming.”

How to Watch Super Stream Sunday

The event will take place on Sunday, March 28, from 5 PM GMT to 10 PM GMT, or 1 PM EST to 6 PM EST for us stateside. Guild is hosting the festivities on their Twitch and YouTube channels simultaneously. You’ll want to tune in to watch some recognizable European artists, esports players and content creators collaborate for this five-hour marathon of gaming excellence!

The Singapore Major has begun and Day 1 has already given us some interesting games.

Let’s check out what happened in the series between Nigma, Team Liquid, PSG.LGD, and AS

Cloud9 Takes A Break From CS:GO, Dissolves Its Roster

The helpful online Warzone tool is reportedly being shut down by Activision. Since Warzone’s release,

Fortnite: How To Tame Wild Creatures In Season 6