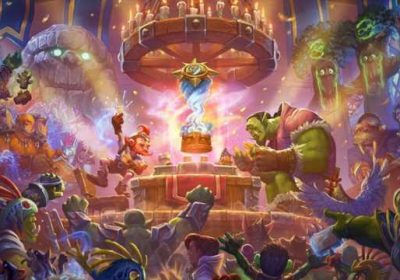 The top four players of each region dueled against each other in Hearthstone Grandmasters Season 1 games on April 11, 2021. These matches followed the quarter finals that happened on April 10.

During the live broadcasts, viewers were able to earn card packs through YouTube Drops.

Yashina “Alutemu” Nozomi and Kenta “glory” Sato dominated the semi finals at the start of the day. While Alutemu obtained a score of 3-0 against Yu Hsin “GivePLZ” Pa, glory won 3-1 against Ching-Li “TIZS” Li. The games did not end there as Alutemu and glory duked it out in the finals.

While Alutemu played his Control Priest deck in the first round, his opponent did his best with Secret Rogue. In the late game, glory had a board consisting of a few minions, but he went into fatigue. Alutemu cleared most of the board using Blademaster Samuro, which prompted his opponent to tap out.

Alutemu continued his win streak in round two by playing Secret Rogue against Control Priest. With Secret Libram Paladin, Alutemu earned a score of 3-0 and became the weekly champion of Hearthstone Grandmasters.

It was Simone “Leta” Liguori versus Thijs “Thijs” Molendijk in the first set of games for Europe.

Although Leta achieved victory in the first couple of games using Post Rogue and Spell Mage, it was not over in the next one as Thijs put up a difficult battle. The latter player used Secret Libram Paladin against Miracle Priest and won the game with the help of Pen Flingers.

Leta brought back Miracle Priest in the forth game. He faced his opponent’s Tempo Rogue, but was not able to claim victory. With a reverse sweep against his opponent and going face with Jaraxxus for exact lethal in game five, Thijs achieved a score of 3-2 and earned a spot in the weekly Hearthstone Grandmasters finals.

The second set of semi final games were between Enzo “Warma” Floch and Torben “Viper” Wahl.

In the first game, Viper won with Spell Mage by going face with Fireball and a minion. However, Warma tied the score 1-1 in the next game using his own Spell Mage against Viper’s Weapon Rogue.

Viper brought back Weapon Rogue in the third game to fight and win against Warma’s Control Priest. Warma persisted and tied the score once again via board control against Face Hunter.

The final weekly Hearthstone Grandmasters game between the players was down to Warma’s Weapon Rogue and his opponent’s Face Hunter deck. After a close game, Viper headed into the finals to go up against Thijs.

The finals for Europe all came down to Thijs versus Viper. The players selected Control Warlock and Face Hunter for the first game respectively, with the Viper obtaining a score of 1-0 after going face with Quick Shot and a minion.

It was a Mage versus Mage mirror match for game two. Thijs won with Apexis Blast and pinging face with Fireblast. Although Thijs tied the score, Viper won the next game with Spell Mage against his opponent’s Control Warlock.

As for the next region, Luna “lunaloveee” Eason duked it out against Shuntian “DreadEye” Luo.

During the first round, DreadEye wasn’t able to play minions and control the board in the early game. Meanwhile, lunaloveee played Post Rogue carefully against her opponent’s Secret Libram Paladin. After intense turns of board control from both players, DreadEye won by playing buffed up Taunt minions, going face and top-decking Libram of Judgment for exact lethal.

Game two involved lunaloveee’s Token Druid versus Weapon Rogue. On lunaloveee’s first turn, she used Coin, Innervate and Power of the Wild, which summoned four Gibberlings on her side of the board.

Although DreadEye got rid of a couple of minions, lunaloveee continued to develop her board. Despite the board clears by DreadEye, his opponent pushed consistent damage to the face and tied the score 1-1.

Game three was Rogue versus Rogue, but with different deck archetypes. DreadEye won with his Weapon Rogue, as his opponent wasn’t able to stop the damage to face using Post Rogue. DreadEye then won the fourth game with Inquisitor Demon Hunter against his opponent’s Spell Mage, which put him in the weekly Hearthstone Grandmasters finals.

As for the second set of semi final matches for the region, Luke “NoHandsGamer” Kooken and Jerome “Monsanto” Faucher clashed against each other.

Monsanto won the first round thanks to his Tempo Rogue against his opponent’s Post Rogue. However, NoHandsGamer evened out the score in round two with Secret Libram Paladin. NoHandsGamer won after Monsanto made a move that allowed his opponent to draw C’Thun, the Shattered.

The third game involved NoHandsGamer’s Post Rogue against Spell Mage. Although the latter player survived via Trick Totem into a clutch Cloak of Shadows, it was not enough for a victory.

NoHandsGamer continued his win streak into game four and won using Spell Mage against Monsanto’s Control Priest. With a score of 3-1, NoHandsGamer went into the finals and fought against DreadEye.

DreadEye secured the first win by controlling the board with his Mage deck against Rogue. Inquisitor Demon Hunter then went up against NoHandsGamer’s Spell Mage, with DreadEye acquiring another victory when his opponent’s Mask of C’Thun missed hitting a Poison minion on the board.

Despite the 2-0 score, NoHandsGamer did not give up in game three. He played his Mage deck again, but this time, it was against Secret Libram Paladin.

NoHandsGamer did a reverse sweep using Spell Mage, Control Priest and Post Rogue, which made him the Week 1 champion of Hearthstone Grandmasters Americas.

This wraps up the results of the Hearthstone Grandmasters 2021 season 1 matchups. The weekly tournament broadcasts will resume on April 16.