Kyojin signs with Team Vitality after being unbanned by Valve 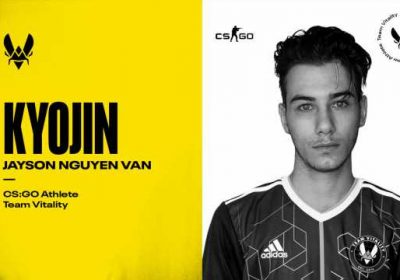 With ESL Pro League coming to a close, Team Vitality failed to make playoffs and went 2-5 in their group. Now, Vitality has announced that they are signing Jayson “Kyojin” Nguyen Van, who was recently unbanned by Valve.

Team Vitality took to Twitter to bench 31-year-old Cédric “RpK” Guipouy. According to coach Rémy “XTQZZZ” Quoniam, “The team is facing some difficulties, and we need to find a new pace.” So, they are signing Kyojin to replace RPK in a site anchor role. While many were quick to criticize the team for not bringing back Nabil “Nivera” Benrlitom to the active roster, the two play completely different roles. Team Owner Fabien “Neo” Devide said, “Kyojin is a more support-oriented” player, which “hardly exists in France apart from Rpk.”

Kyojin’s signing comes just one week after Valve unbanned the 22-year-old player. A few years ago, he received a vac ban by Steam but he still tried to compete. However, no top team could sign him because he wouldn’t be able to play in Valve-sponsored tournaments. Finally, on April 3, Valve finally lifted Kyojin’s VAC ban from his profile; he can now compete in Valve events. One week later, Vitality signed him and he finally got the chance that he deserves.

I’m extremely excited and will give everything to prove myself 👊

Valve has always been reluctant to unban players. Former ENCE player Elias “Jamppi” Olkkonen was a star player for the team, but he ultimately switched to Valorant because Valve refused to remove his VAC ban. Kyojin is now one of the very few players who have had their VAC bans removed. Another player includes Endpoint’s Robin “robiin” Sjögren, who was falsely banned due to a cheat for a different game.

FINALLY UNBANNED, dont really know what to say, so many mixed emotions right now and this is super hard to take in… It took way too long but I am still soooo happy, hopefully I can finally make it somewhere, thanks to everyone that actually believed in me!! 😭😭😭❤️❤️ pic.twitter.com/mnxMw9bPLo

Kyojin’s debut match with Team Vitality will not be during Blast Premier Spring Showdown. RPK will play for the event and Kyojin will debut with the team at Dreamhack Masters Spring on April 29.