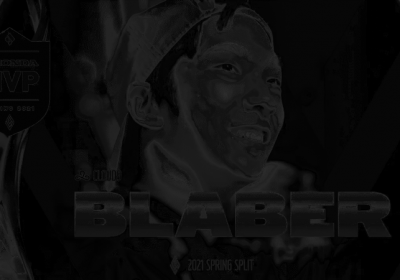 Cloud9’s jungler wins the MVP voting for the 2021 Spring Split.

The LCS announced via Twitter that Robert “Blaber” Huang has won the 2021 LCS Spring Split Honda MVP Award. Without a doubt, he was instrumental in Cloud9’s dominance of the LCS thus far and worthy of the title. It’s of little surprise he won it too, considering he was far and away the highest-voted jungler for the LCS All-Pro voting, beating out Lucas “Santorin” Larsen by nearly a whopping 60 points. The only other player to dominate the voting with such a gap was TL’s top laner, Barney “Alphari” Morris, who was probably also the only other player in real contention for the MVP title.

In the announcement, the LCS included a video highlighting Blaber and some of his biggest plays. In it, Blaber showcased his confidence, saying he’s definitely the best jungler in the league right now and even threw his hat in the ring for title of best LCS jungler of all-time. Since his debut in 2018, he’s certainly turned heads and made a strong case for himself. Funnily enough, last year he won the MVP for Spring at around this time too. As the list of accomplishments continues to grow, all eyes are on the young jungler to live up to expectations and keep delivering incredible results.

With this award under his belt, Blaber is more than ready for the Mid-Season Showdown Finals. After beating Team Liquid two weeks ago, he’ll battle either TSM or TL for the MSS crown. And, more importantly, a spot in this year’s Mid-Season Invitational (“MSI”).