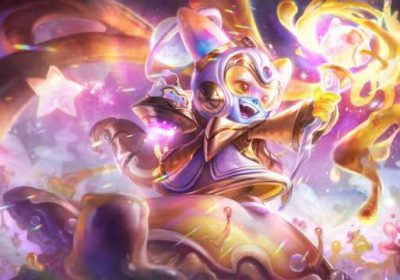 The latest battle pass event has descended upon League of Legends and it comes from the stars. Space Groove 2021 brings a long list of new missions, milestones and event-exclusive rewards. The event also marks the return of fan-favorite limited-time game mode: One for All.

The Space Groove 2021 event runs from April 1, at 4:00 p.m. ET until May 4 at 2:59 a.m. ET and introduces a host of new skins, including the adorable new Blitz & Crank Legendary skin. As always, the ultimate prize for this battle pass is the game’s newest Prestige Edition skin: Space Groove Lulu.

Players can purchase the LoL Space Groove 2021 pass for 1,650 RP, which unlocks a reward coin payout for every game played during the event. Additionally, the pass comes with 4 bonus Space Groove loot orbs and 200 Space Groove event tokens. It also gives players access to 20 new milestone missions and four weekly win missions. For a full of details on all of these missions and pass perks, scroll down!

The larger Space Groove 2021 pass bundle costs 2,650 RP and comes with everything in the battle pass. Additionally, the bundle includes the Lulu champion and the Space Groove Lulu skin set. This set includes the regular edition skin, the matching summoner icon and a loading screen border. Players that are indecisive on purchasing the skin bundle can simply purchase the cheaper pass first and decide later if they want to pick up the skin. The bundle will only cost 1,000 RP at that point, so there’s additional no RP cost for doing this.

Please note that the 2,650 RP bundle is not discounted for players who already own Lulu as a champion.

As mentioned above, unlocking the Space Groove pass gives players access to token rewards at the end of each game. Coins will be rewarded for every game played but the amount is higher for wins over losses.

These missions unlock on a weekly basis throughout the event and require activity points to be completed in the same way as the milestone missions listed above. Once again, the rate is 5 points for a win and 2 points for a loss.

Despite using the same scoring system, Weekly Win missions can be worked on alongside milestone missions.

For a more comprehensive overview of the Space Groove 2021 event, check out the official Riot Games dev blog.