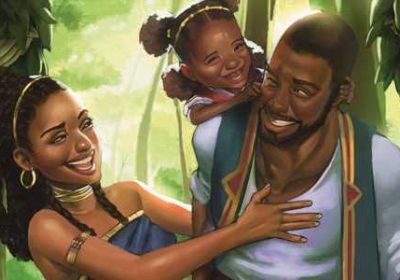 Wizards of the Coast is celebrating Black History Month with a brand new Magic: The Gathering Secret Lair drop later this month.

The Secret Lair: Black Is Magic will feature seven borderless alternate-art cards. Each card features art that expresses different aspects of Black identity. Every card in Black Is Magic has art from a Black artist and showcases their unique styles.

The final two cards will feature artwork from Julio Reyna and Thomas Zenteno. Wizards will announce more information about Black is Magic on Feb. 16.

Bringing Black Is Magic to life

Game designer Sydney Adams spoke at length about the inspiration and design choices that Wizards of the Coast made in creating Black Is Magic. Each card in Black Is Magic represents a different aspect of Black identity. Shalai, Voice of Plenty is a guardian angel in the new art, one who protects and shields people from harm.

“In a lot of ways, this card is a talisman that I want to put out into the world,” Adams said while describing the artwork of Shalai, Voice of Plenty. “We might not find any real-world equivalent of hexproof, but we can try. I want the future generation to be under protection from the generational curses that plague us.”

The proceeds from Black Is Magic will benefit the game design, digital art and game development programs offered by Black Girls CODE. The organization works to empower girls of color to learn about game design, coding and other STEM fields while also building leadership skills.

Preorders for Black Is Magic will be available from February 22 to March 31 in both foil and non-foil versions.