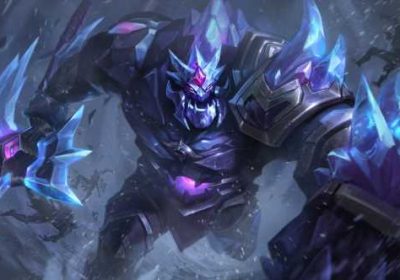 Even Gwen, Riot’s newest champion in League, is set to receive her own launch skin alongside this bundle. Her sewing-themed abilities were showcased earlier today alongside the new Space Groove skin.

A few other menaces in the top lane are set to receive some new skins. For example, Sion will be added to the Blackfrost skin line while Kayle is added to the Dragonslayer line.

It’s been a long time coming for The Undead Juggernaut. Sion has not received a skin since last year with Worldbreaker. However, the last time he received a skin before that was in 2016 with Mecha Zero.

Galio, who has not received a new skin for two years, has been given a much needed makeover.

In the mid lane, Vel’Koz will receive a Blackfrost skin while Galio has a white-themed Dragonslayer skin. This is slightly different from the typical red and orange color theme for the skin line.

The bot lane is somewhat scarce on skins for the upcoming PBE cycle but Twitch will be added to the Dragonslayer line.

Twitch hasn’t had a new skin since Shadowfoot last year. Somewhat similar to Sion, the last time he received a new skin prior was Omega Squad in 2017.

For a chance to try out some of these skins alongside Gwen, players can head over to the League PBE later today. Although the release date was not revealed on social media, it’s likely that the skins are set to be released in a few weeks, typically to ensure the skins do not cause game-breaking bugs.