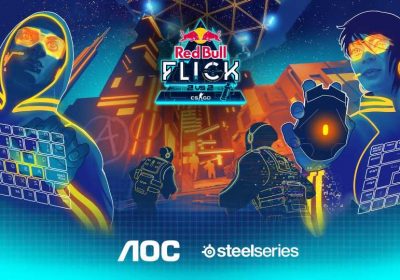 After more than 45K registrants from 30-plus countries participated in 2020, Red Bull is bringing back Red Bull Flick, the 2v2 Counter-Strike: Global Offensive tournament that will pit teams of two against each in sci-fi themed custom maps. The first 2021 Red Bull Flick International Online Qualifiers are open for registration on the esports tournament platform FACEIT, with national tournaments beginning in April.

Red Bull Flick has partnered with SteelSeries as the tournament’s new official peripheral partner, which will provide headsets, and AOC will return as the official monitor partner.

The event is open to players from around the world and is searching for the best duos team in the scene. Teams will also have the chance to challenge other CS:GO pros in the Red Bull Flick Invitational, the official pro-am event that will take place in Helsinki at the end of the season.

For this year, the theme is sci-fi and teams will compete in sci-fi themed, custom maps and arenas that will be played virtually on multiple planets and space stations. Featuring capture points in 2021, each duo will fight for control of each map. A first for this type of in-game narrative.

Started in 2019 as a live event in Turkey, Red Bull Flick says it has more than 45K registrations as well as some very recognizable teams and names taking part. This year, Nikola “NiKo” Kovač will join as the official Red Bull Flick Brand Ambassador.

The new season will see national tournaments taking place in more than 30 countries and international online qualifiers that will be open to all. Winners will advance to the Red Bull Flick Invitational Helsinki.