MacieJay has been playing Siege since its release back in December 2015. He currently has over 182,000 Twitter followers and 1.39 million subscribers on YouTube. As a result of posting his clips on sites like Reddit, he gained a large following and a Twitch partnership in July 2016. Now, all the hard work he put into streaming has led to this partnership with globally-recognized organization TSM.

Two dubs in one day 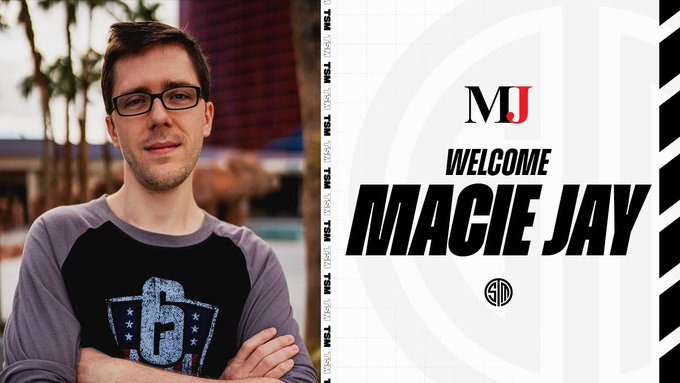 This use may include analytics, personalization, and ads.

TSM is thrilled to have him

In an official statement, TSM celebrated their new R6 influencer. “We’re just as excited to have another fantastic influencer flying the TSM banner, and we can’t wait to work with him to create quality content for our fans.” Besides streaming, MacieJay is also known for his off-meta strategies and way of thinking, “often showing the worth and value of lesser used operators.”

TSM recently hinted at their new member by asking their followers, “If we could sign one player of your choice, for any game, who would it be?” The tweet received over 11,000 likes and comments. Soon after, they posted their MacieJay announcement.

Good luck out there!

MacieJay also shared his own thoughts on this agreement with TSM. “I’m excited to have the support of TSM as I continue on as a content creator. No longer having to ride it out alone is an amazing feeling and I’m grateful to have such a big org backing me!”

Just yesterday, MacieJay was excited to tell Twitter that he had unintentionally played with Team Liquid. Today, he is finally able to tell his followers that he is officially a part of an esports team. Hopefully, MacieJay will only continue to excel as TSM’s newest Rainbow Six member.