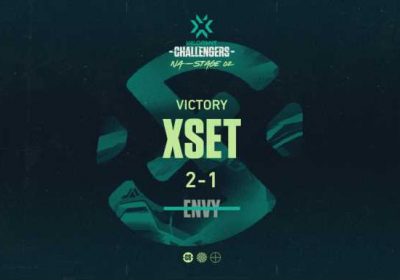 XSET get revenge against Envy to move onto the Grand Finals of the VALORANT Champions Tour Stage 2 Challengers against 100 Thieves.

The revenge match was one of the best series of the tournament. Especially after XSET went down in the first map and would have to reverse sweep Envy to move on. XSET was one of the underdog teams at Masters 1 despite their position on TheSpike.GG’s North American ranking system. Despite being ranked No. 5 overall in NA, they still had shaky performances against top teams.

XSET pulls off the reverse sweep to take down Envy

Envy prevailed on XSET’s map pick of Split to start off the series. They went on a nine-round win streak after XSET went up 3-0 at the beginning of the map. XSET was able to stop the bleeding in the second half on defense and attempted to hold Envy back. However, Envy had the upper hand and was able to stop XSET’s win streak to close the game out 13-9. With their backs against the wall, XSET needed to win back-to-back maps against Envy. Split went back and forth between the two with XSET taking the early lead at the half. They continued their lead into the second half, but Envy still was able to take off a few rounds. XSET won 13-9 on Bind and would have to beat Envy on Ascent to close out the series.

A three map rematch and @XSETGAMING come out on top 2-1, securing their spot in the #VCTChallengersNA Grand Finals!

Tune in tomorrow @ 3pm ET to catch their match against @100Thieves 🔥 pic.twitter.com/kdgks8cVF9

Envy switched their composition up on Ascent, choosing to have the Skye and Killjoy instead of the Sage and Cypher from previous maps. XSET kept the exact same agent composition for the last map since it worked in their favor during Bind. Envy fell behind at the half 5-7 and struggled to gain the lead early in the second half. After four consecutive rounds, XSET moved to just two rounds from the win. Envy held them back for two more rounds, but eventually, XSET pulled out the unthinkable on an eco to win the game.

XSET will now face 100 Thieves in the Grand Final of the first Challengers event for VCT Stage 2.