How Blizzard builds the bosses behind Hearthstone’s solo campaigns

Playing Hearthstone’s campaign mode is all about conquering the wild swings between success and tragedy. When I play my cards right — quite literally — the game becomes a power fantasy. I am an unstoppable force, clearing the board of enemies with incredibly clever combos.

And then I run into a boss who is seemingly designed from the ground up to ruin my day. I feel more like a buffoon, Benny Hill–style fumbling my way back to the start of the campaign.

The third campaign of 2019 is set to wrap up the storyline that ran through Rise of Shadows and Saviors of Uldum. That means there’s going to be another single-player campaign with a long stretch of boss fights. Hearthstone’s PVP remains chaotic, based off powerful combos made by players who have carefully farmed packs. Hearthstone’s PVE has to find its difficulty through other means.

In Rise of Shadows, players took the role of the League of EVIL, a bunch of mustache-twirling baddies. In Saviors of Uldum, the narrative flips; now, players are the good guys.

“One of the things we did was really amp up the fantasy that you’re explorers,” says Dave Kosak, lead missions designer on Hearthstone. “One of them is the signature treasures, a tool chest of tricks they can use that also tells the story of the character.”

The Saviors of Uldum are also dual class heroes, which means they draw from two separate decks of cards. Overall, this makes them more potent than just a Mage or a Paladin. Elise Starseeker can pull out high cost minions and then buff them up with Priest spells. Reno Jackson can clear the board with low-cost Mage spells and Rogue combos.

I have become a versatile jack of all trades, running through a gauntlet of bosses. “One thing we learned early on in this kind of ‘build as you go’ format is that the bosses don’t need to be too complex,” says Kosak. “Often, you can just give them a simple ability that changes up the fight and puts emphasis on the player and the kind of deck they built.”

The formula for this year’s set of expansions has been to have hero characters with a wide diversity of tools, and then set them against a boss with a mean gimmick. My route of bosses are randomized, and different chapters of a campaign add new complications, like a narrowed board or a tide of murlocs. And so sometimes, I create a deck that clears lots of little guys off the board easily … and then I run into a boss who thrives off putting big boys into the field. Oops. 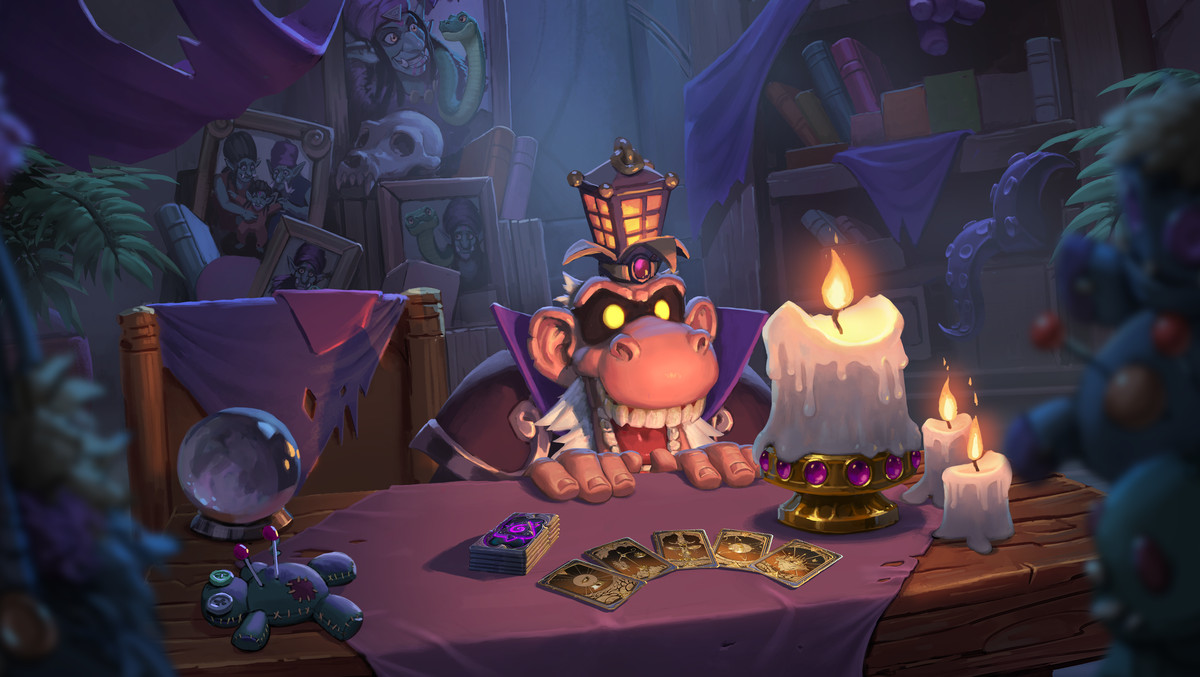 Even this guy could be a boss
Blizzard Entertainment

“It’s also about giving you hope all around the bosses,” says Alec Dawson, game designer on Hearthstone, in an interview with Polygon. “Going into the tavern to upgrade your deck, you have these opportunities, and you start to recognize what you may need in a certain location, what bosses are unique in that location, and you can build accordingly.”

Every time I fail, I learn a little more. Every time I reach the end boss of a gauntlet, the Plague Lord, I chip away at his health pool and make the next encounter easier. And while bosses have one big strength, that’s usually a double edged sword that comes with an exploitable weakness. “The boss will have cards that wreck his own strategy,” says Dawson.

Sometimes I go into a boss fight with a hyperspecialized deck, and I’m swept away under a tide of power. Other times, I’m able to recover by using one of my powerful relics or an ace card to pull something equally silly and over-the-top powerful. A VIP membership means that every tavern I walk into is upgraded, meaning the rest of my run will be smooth sailing. One weapon, the Aegis of Death, is five mana. Once I equip it, my hero is totally immune to all damage … but the weapon’s durability ticks down from 10. Once it hits 0, I take 100 damage, taking me out of the fight and ending my run.

Kosak also notes that sometimes a card may not seem as powerful as its peers, but in play, it can be a big game changer. He cites the Bauble of Beetles, a four mana spell that resurrects the first four friendly minions that died in a game and grants them the Reborn property (upon death, revive with one health) as a card that is capable of swinging a game in the player’s favor in the Tombs of Terror.

That becomes the balance of power between boss and player. The boss has one obvious ability that defines its playstyle. The player earns lots of little puzzle pieces. Even the most interesting and amazing looking cards can’t win a match; I have to learn how to combine my cards and when to set up the chain.

The end result is somewhere between a puzzle game and a roguelike. Blizzard has managed to create an alternative to the PVP gameplay that draws on the same cards and assets, but feels dramatically different. Blizzard will spill the beans on the final stage of this three-part story at BlizzCon 2019; we’ll learn more details on Nov. 1.