10 Best Accessories For Your D&D Set-Up

Dungeons & Dragons (D&D) is a tabletop roleplaying game that doesn't require much more than your imagination to play and enjoy. Especially these days with the internet, if you have some kind of computer and a few friends you basically don't need anything else to sit down and enjoy some fantastical adventures.

However, that doesn't mean that you can't improve your experience a little bit (or a lot!) with a few key accessories. Whether you're a Dungeon Master (DM) running the show or the player who's experiencing it, we think that you'd benefit from one or two of these epic additions to D&D. 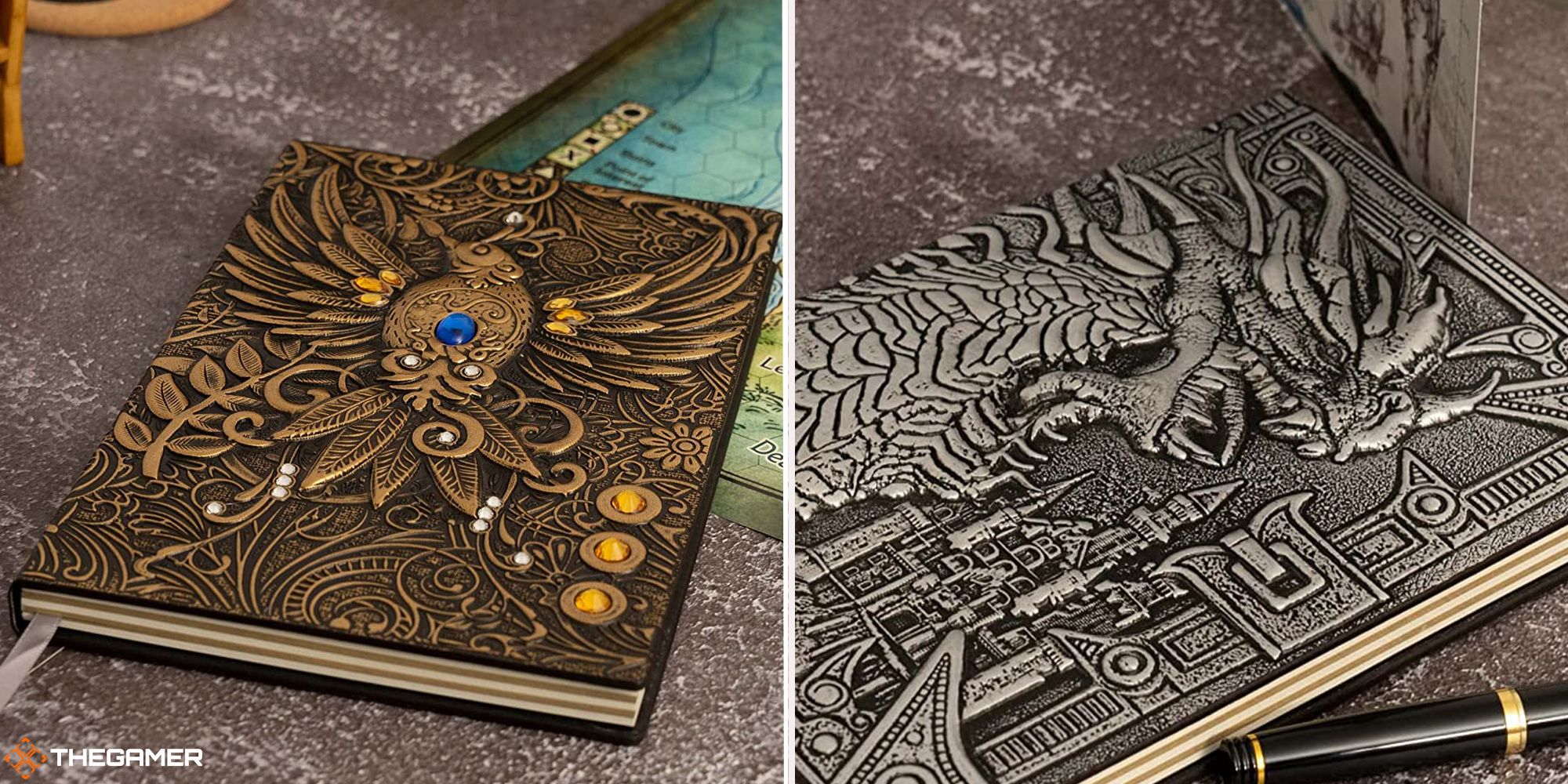 If you're in a long D&D campaign, there's going to be a lot of information to remember. From character names and backstories to the information you received from the NPC you interrogated on your travels, there's lots to know! That's where a journal or notebook for D&D comes in handy.

This one from LYNX is perfect for bringing to your sessions. It comes in four styles – Bronze Dragon, Silver Dragon, Bronze Phoenix, Rose Gold Phoenix – which don't ruin the atmosphere at the gaming table and are compact enough that you don't mind lugging it with you to the DM's place for game night. 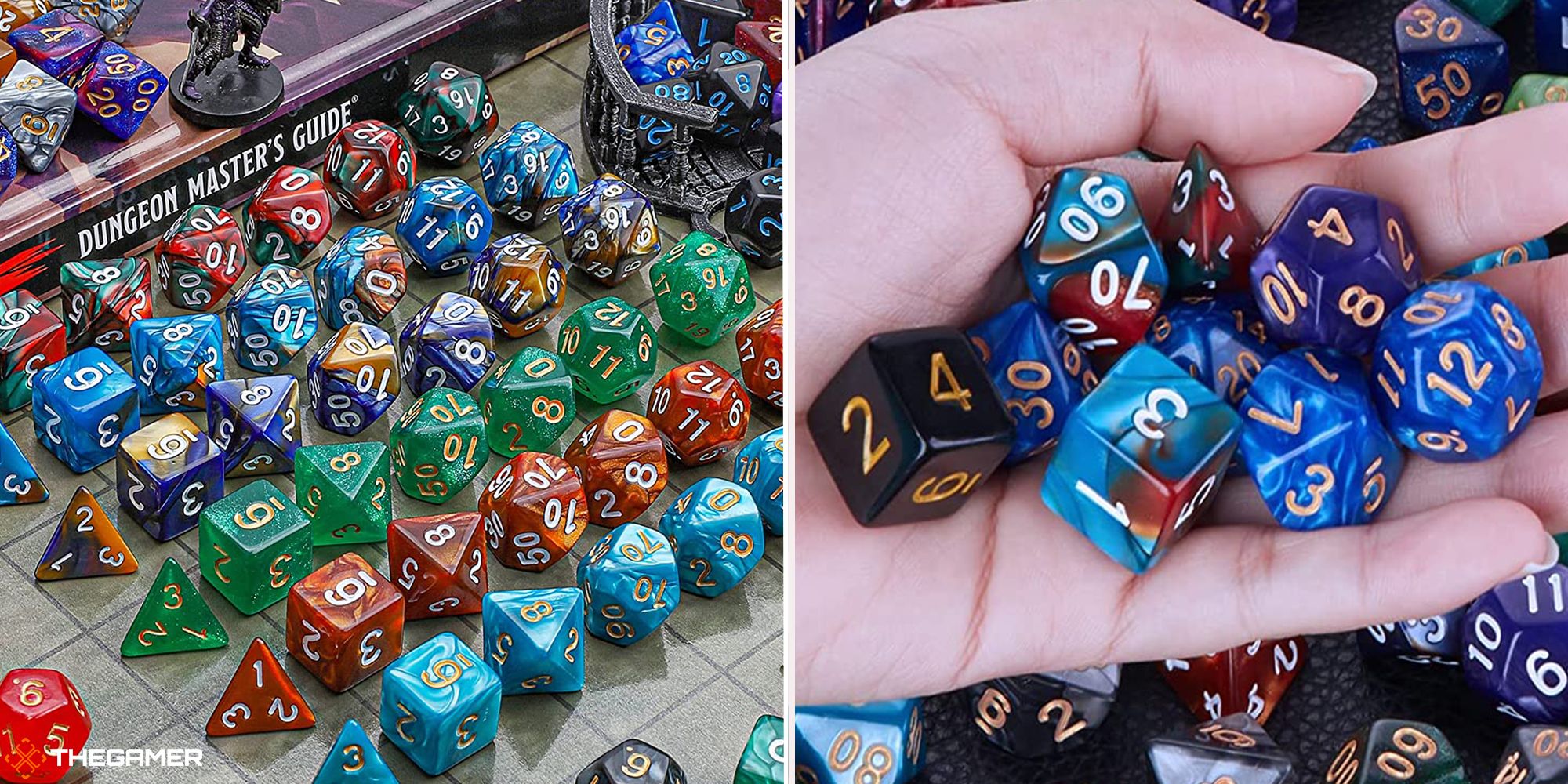 Dice are a hallmark of D&D, especially the D20, since it is used for so many general checks in-game. Though you can roll dice online these days with a touch of a button, there's nothing quite like the feeling of real dice in your hand and the tension that rises when it clatters to the table.

If you are in a pinch for a lot of dice, we recommend CiaraQ's set of 26 dice sets. One set of dice includes seven, so that's 182 dice in total! It even comes with a nice little drawstring bag to keep them safe.

Why do you need so many? Well, some players prefer to have a unique set for every character they play. In addition, you often need to roll multiple dice for a single check anyway and, with three or four players and a DM, the number of dice you need can quickly add up. Plus, some new players may not have the money to invest in dice, so it's nice to have some spare for them to borrow. 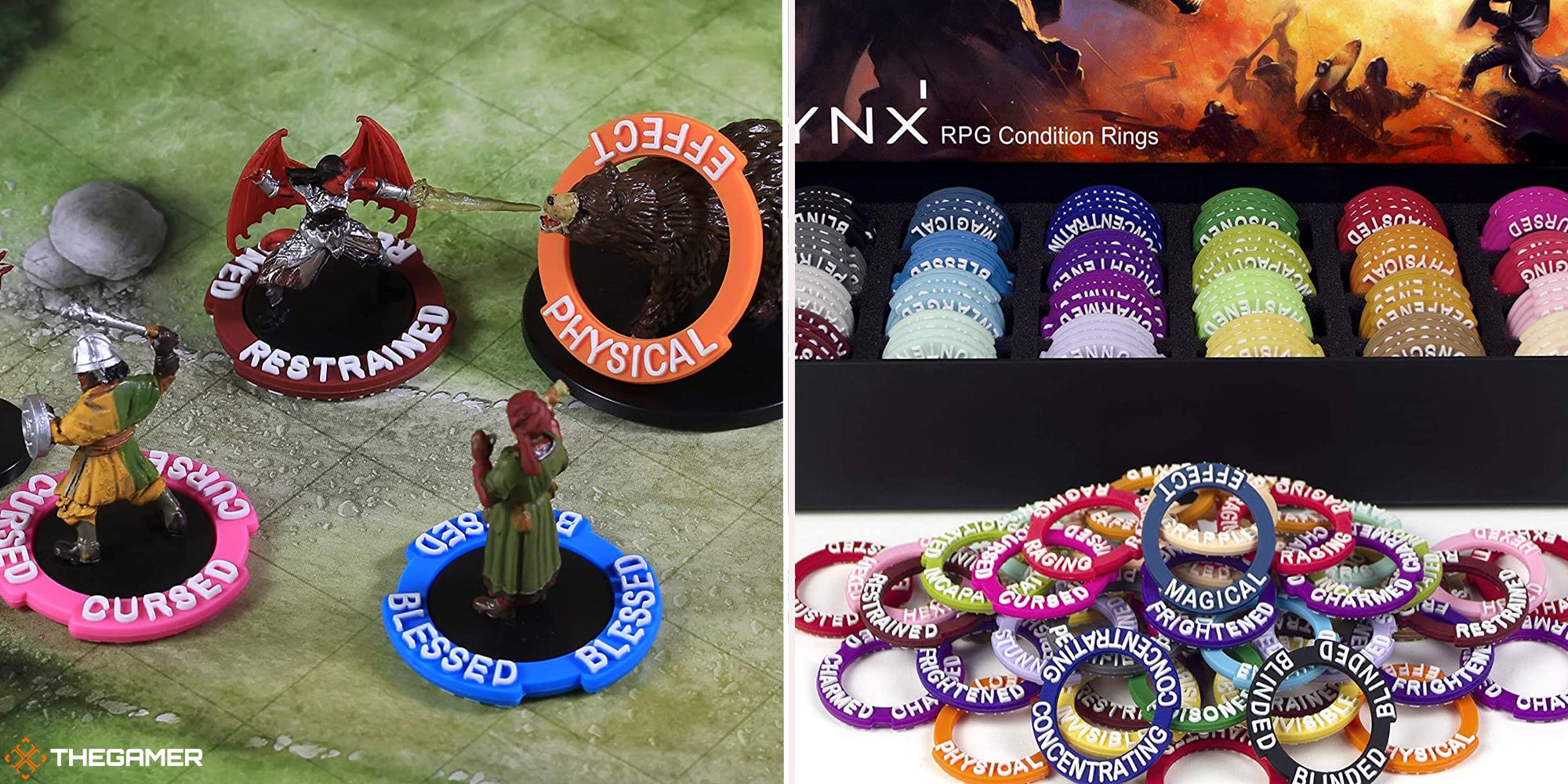 D&D's combat involves a lot of interchanging components! There are three or four or more players attacking what might be up to 50 enemies! Some of the best accessories, like condition markers, help you to keep track of complicated combat.

Condition markers track a wide array of buffs and debuffs that a character may have on them at any one given time, whether they come from spells or some other source. We recommend this set from LYNX because they come in a sleek black case, can be used with or without miniatures, and are made of flexible, durable rubber.

They're also readable from any angle, so when your party is all sitting around a table, everyone knows exactly what's happening at a glance. 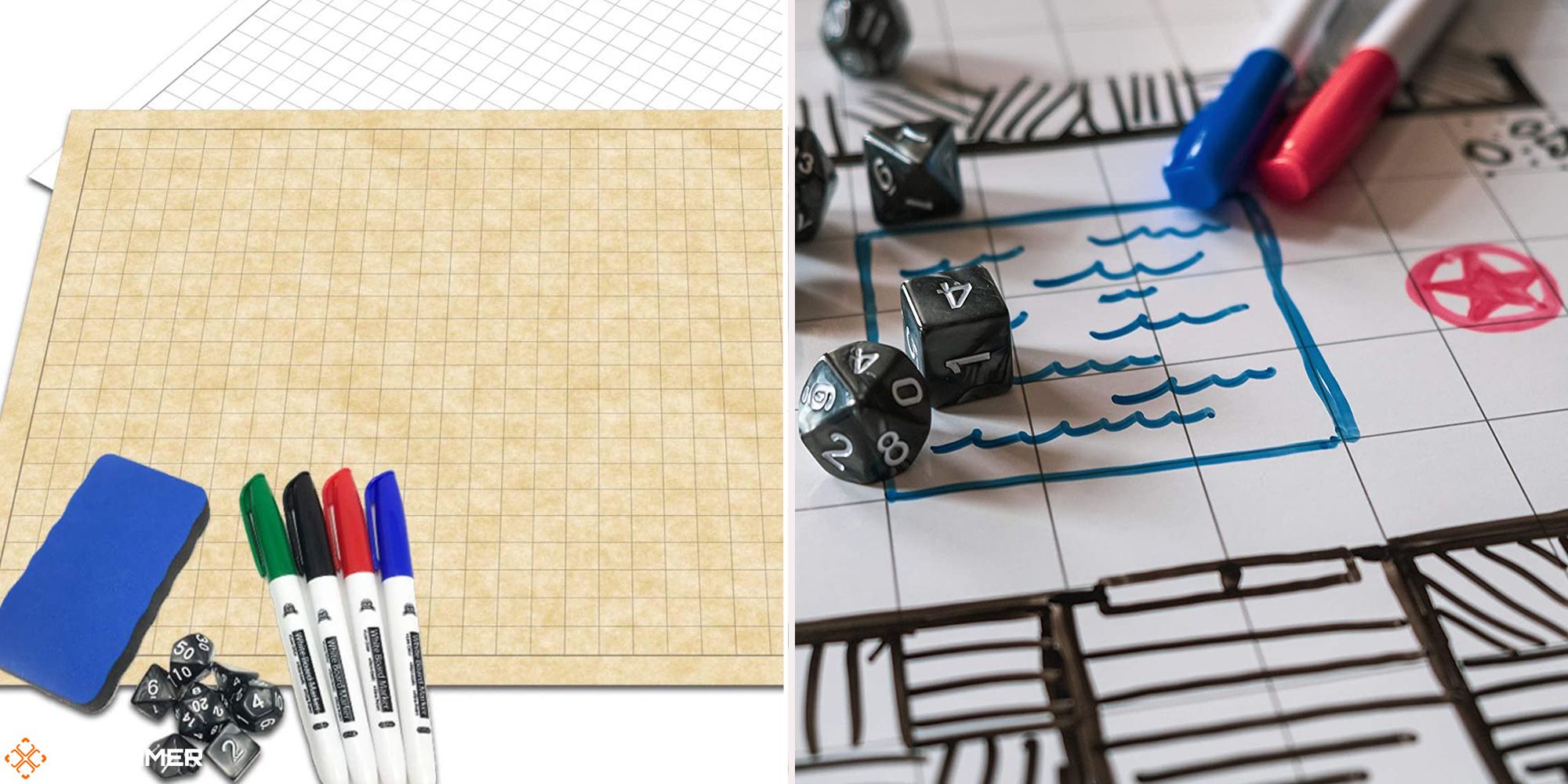 There's only so much that you can describe to the players as a game's DM. Through no fault of your own, players may get the wrong idea about where they are, where their enemies are, or just what the room looks like. The most attractive solution to this problem is to buy sets, but they're often expensive and limiting.

Purchasing a Battle Mat – a dry-erase surface you can put on a table and doodle on – is a much better alternative. The one featured above is double-sided for when players perhaps are traveling between two related areas, and it comes with its own set of multicolored dry-erase markers, an eraser, and a set of black dice. 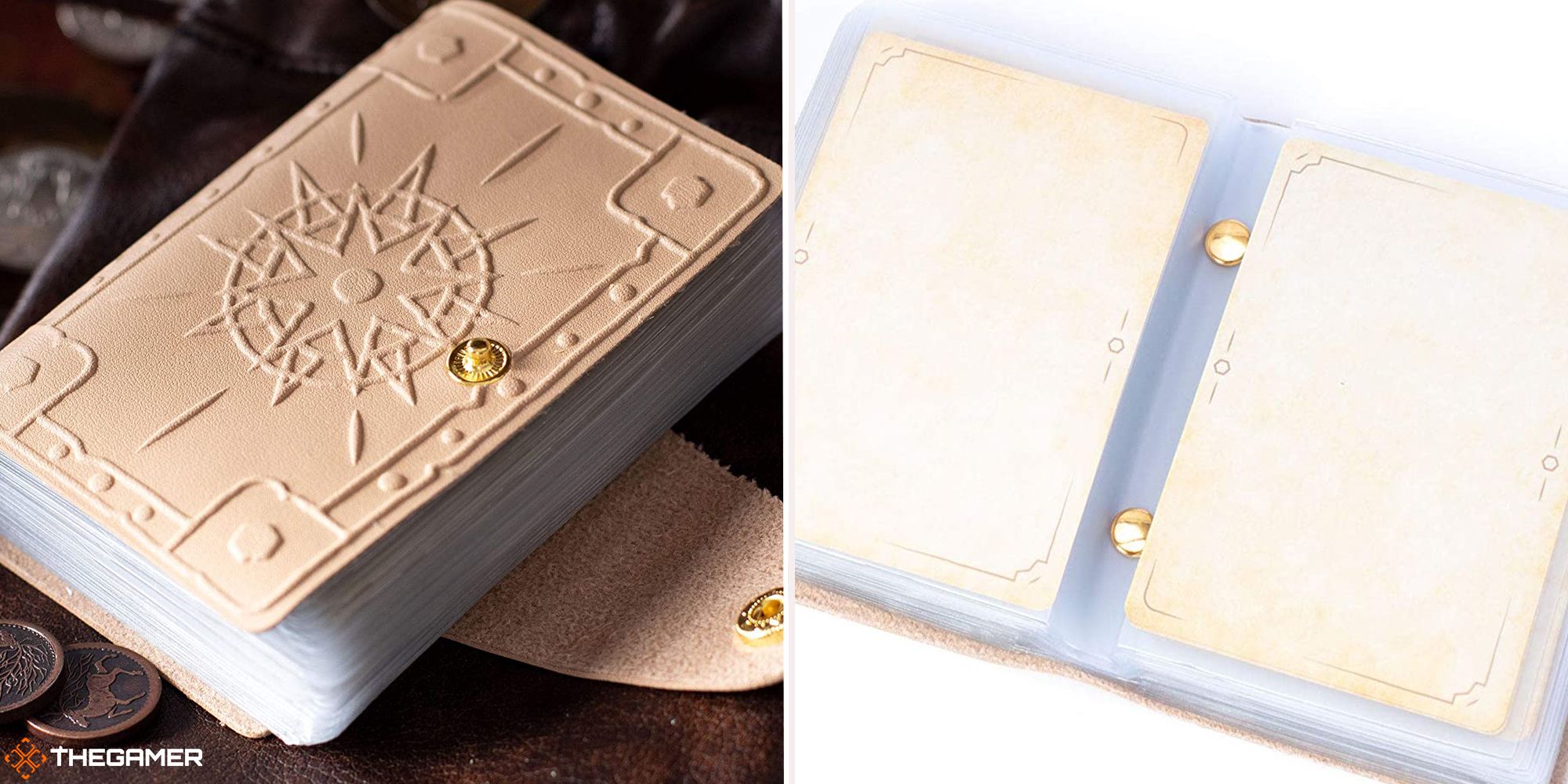 Players acquire a lot of items, spells, plot-relevant items, and more during their travels! While they usually have a character sheet to keep track of them with, digitally or physically, it's not always a perfect solution. If you find an epic weapon, it's a tiny bit anticlimactic when it's just noted in pencil on a sheet of paper. Plus, small notes and items often get missed.

A more exciting, engaging alternative is to keep this little Pocket Compendium. It comes with 54 blank cards – about the size of your average playing card – on which you can write whatever you like! Add the stats for your favorite weapon. Write down the details for your most-used spells. Pulling something out of this will feel much better than just saying you're going to cast 'Animate Dead.' 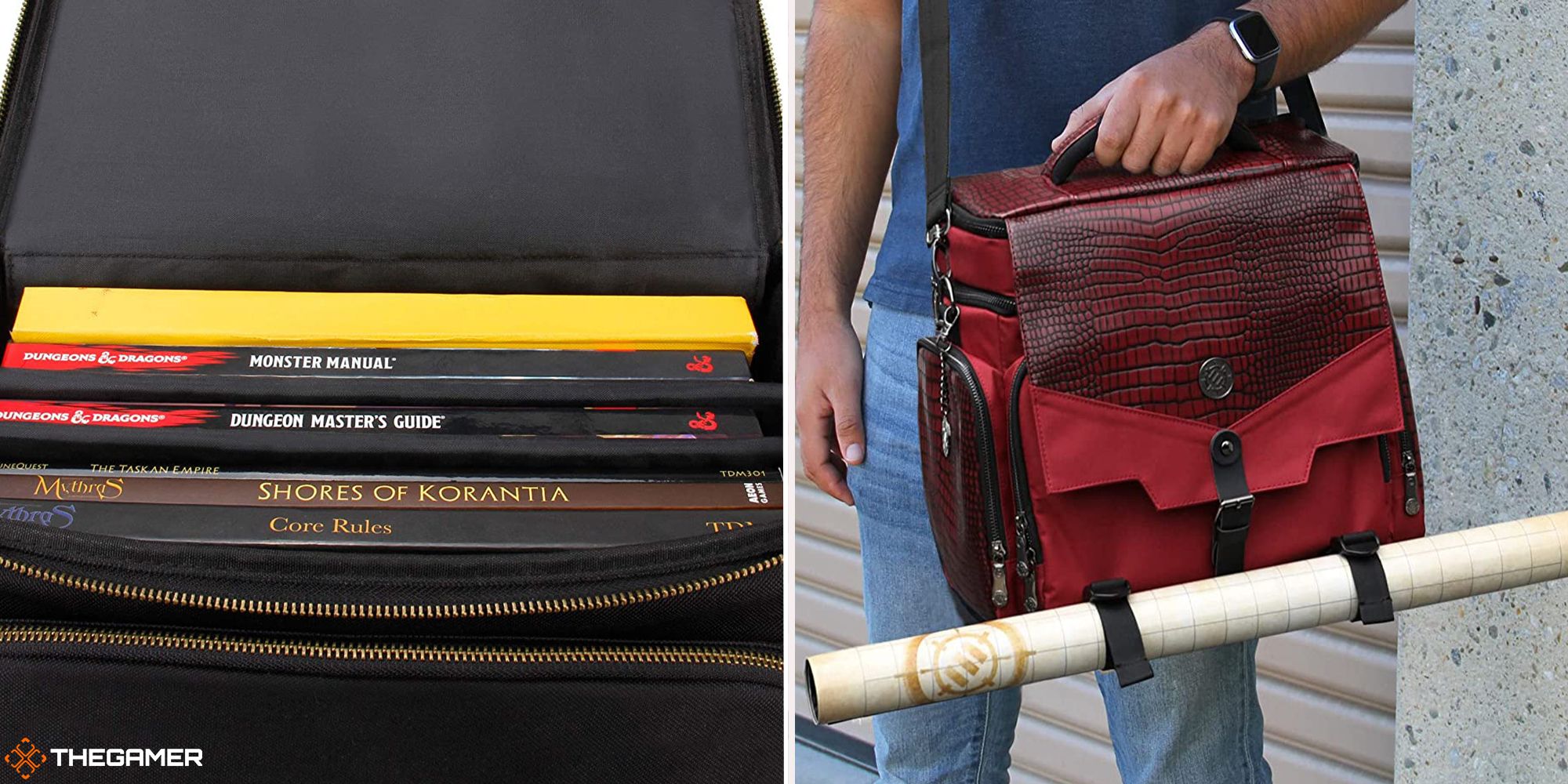 If you're the Dungeon Master of a campaign but aren't the regular host for the party, you'll wind up carrying a lot of equipment to your friends' homes. There are all the books you need, for one, plus probably a laptop, maybe even miniatures, a battle map, a portable speaker, dice, and more. Depending on how dedicated of a player you are, you may be carrying some of that too!

To help you lug all this gear around, consider investing in an Adventurer's Bag. Designed specifically for D&D, it comes with space to fit those enormous rulebooks, slots for miniatures, hooks for a rolled-up map, and more! It even comes in six different colours, some of which include decorative leather scales on the front. 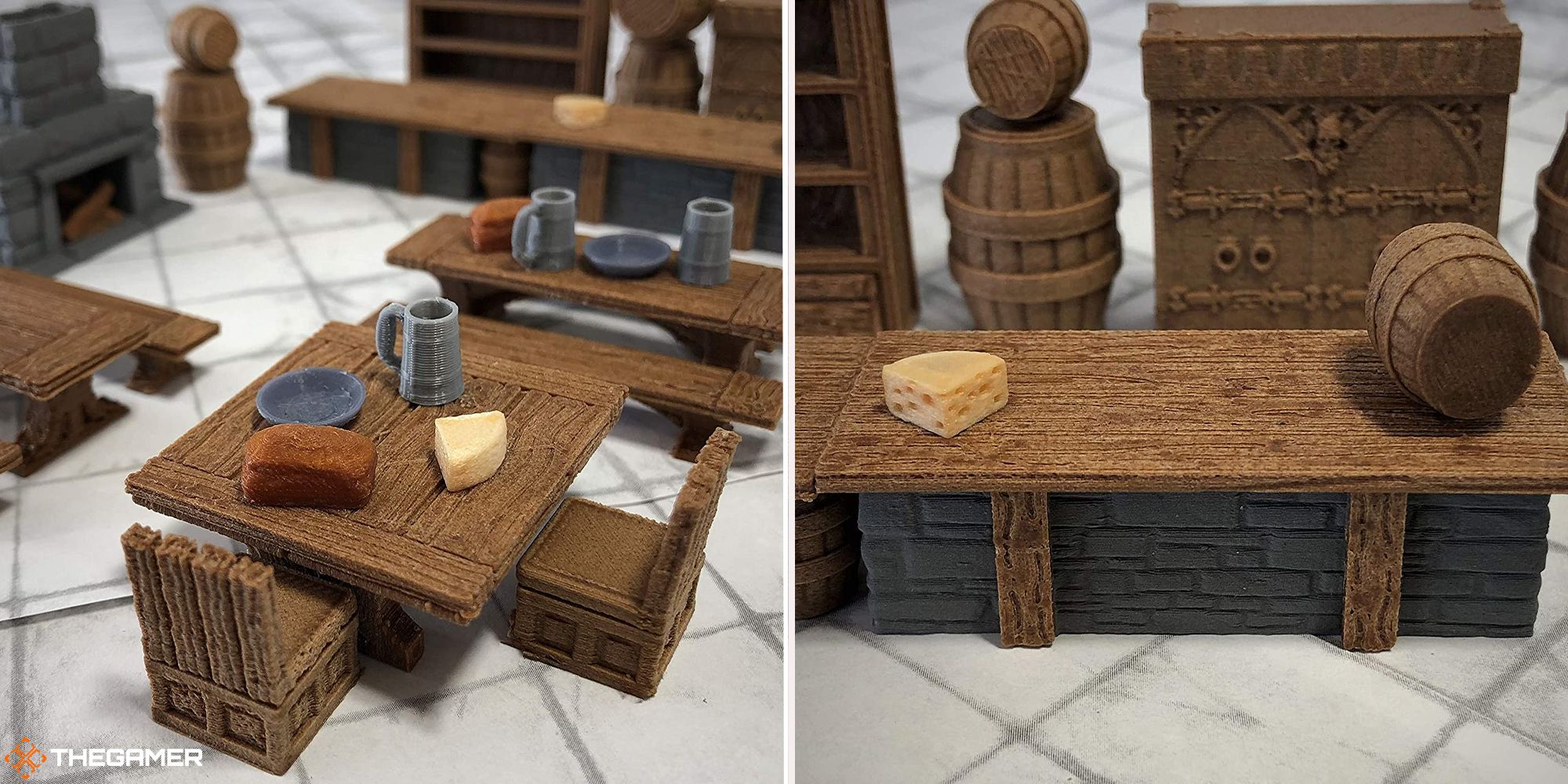 Many DMs won't think of buying miniatures for their games. To be fair, we can't blame them. Many miniatures don't come painted so that they can be personalized, but that adds up to a lot of work for you. Miniatures are often pretty specific to certain circumstances, just like the sets we mentioned previously, meaning they don't get reused much. Plus, they are often paired with landscape sets. However, we'd suggest you shouldn't write off miniatures entirely.

For example, consider the set featured above from Extruded. To start, it comes already painted, so there's no added labor. In addition, it's of a bar/tavern, which is something that appears in almost every campaign anyway.

No, they won't spend an entire game there, but they will stop into them to rent a room, hear local gossip, get food, or look for NPCs. Then you'll notice that it's completely customizable and doesn't need to pair with a landscape – it can fit easily on a battle mat. Little touches like these are a great investment and will last for as long as you continue to play D&D. 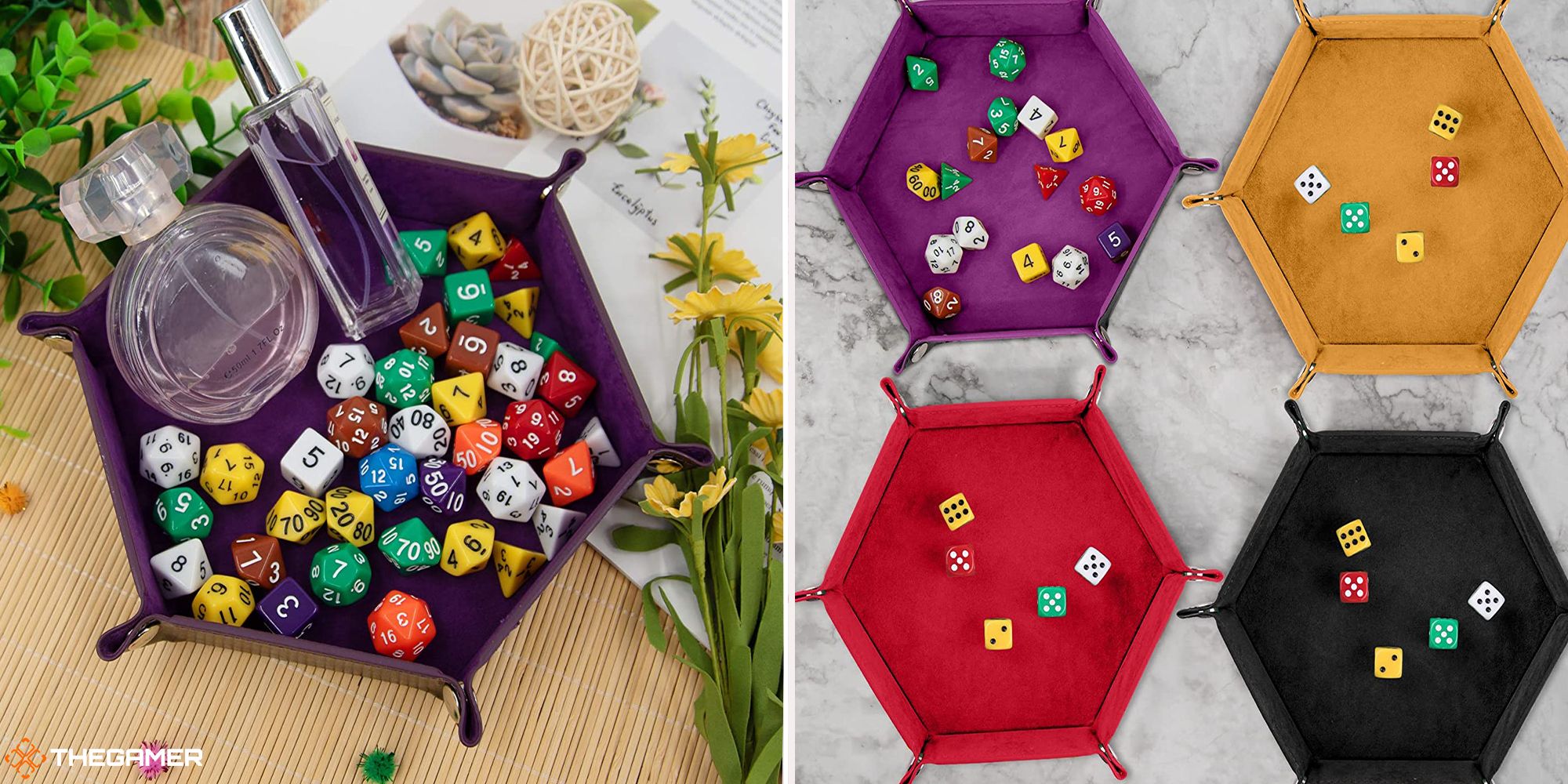 If you've been to a couple of D&D sessions before, you'll know that rolling dice can get hectic. They're liable to bump into miniatures, fall over cards, jump over the table and roll onto the floor, be played with by pets, and much, much more. Plus, many players are superstitious about their dice – would it have rolled better if it hadn't bumped into another player's glass?

To avoid all that chaos, we suggest some simple dice rolling trays. They're made of velvet to roll the dice smoothly and cleanly without hassle, and look sleek on a gaming table. The ones featured above from SIQUK have leather exteriors and come in sets of four. To suit any party's aesthetic, there are 16 different colour combinations. 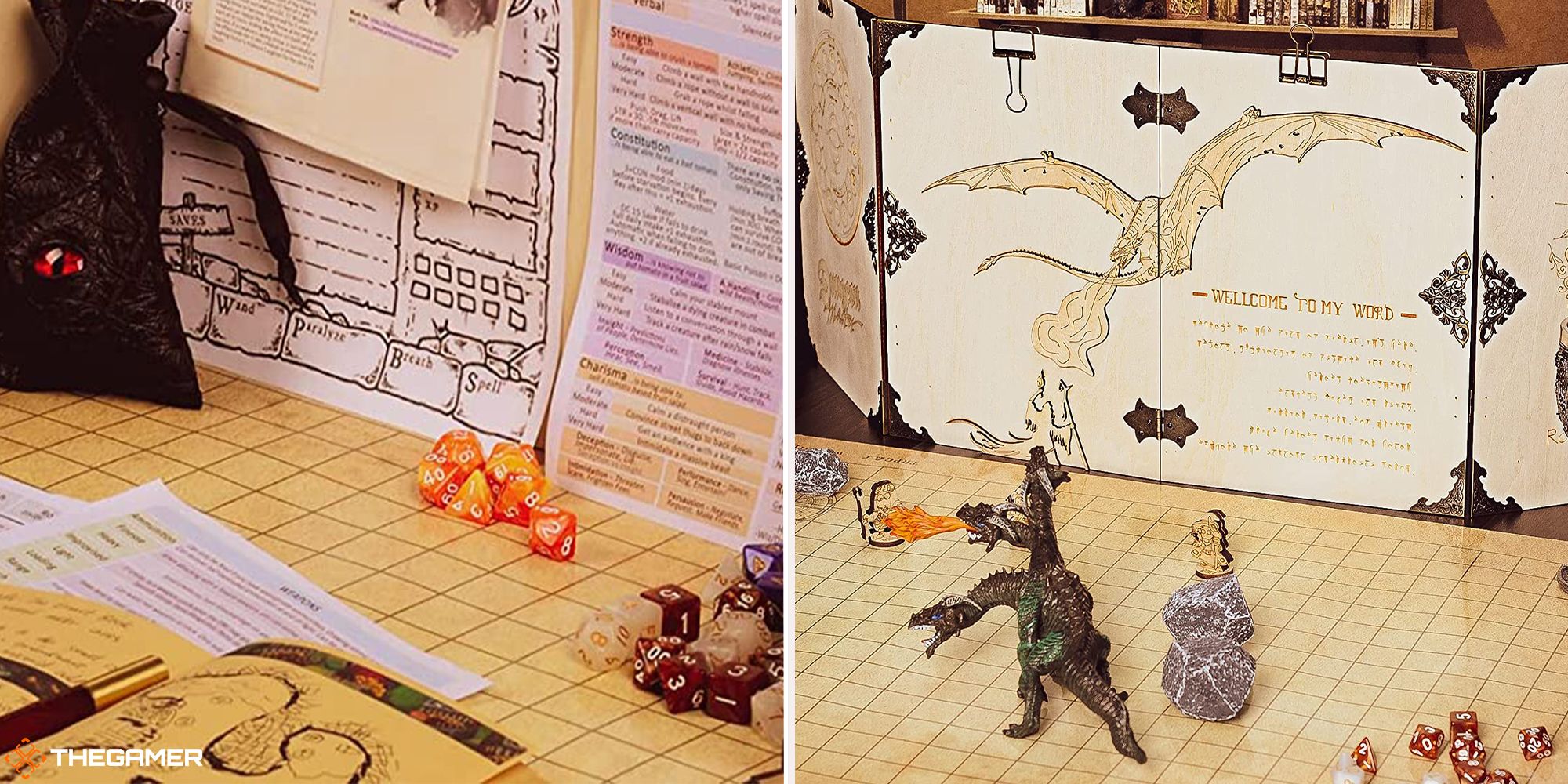 There are lots of reasons that a DM might want a screen between themselves and the players. It adds a bit of mystery to the game, for one. More practically, though, it serves to hide the DM's rolls, stat blocks, and other key information from the players to reduce the chances of metagaming. While there are official DM screens sold by Wizards of the Coast, we prefer this third-party custom wooden DM screen. It's made from birch plywood and accented with gorgeous art and metal hinges.

The best part is that it's customizable! Most DM screens come with information pre-printed for your use but, using simple metal clips, this one allows you to easily change the information you're seeing. Are the players fighting the campaign's main enemy in this session? Put up their stat block. Will they be making a lot of purchases in-town? Put up a list of costs for basic items like rope, rations, candles, etc. 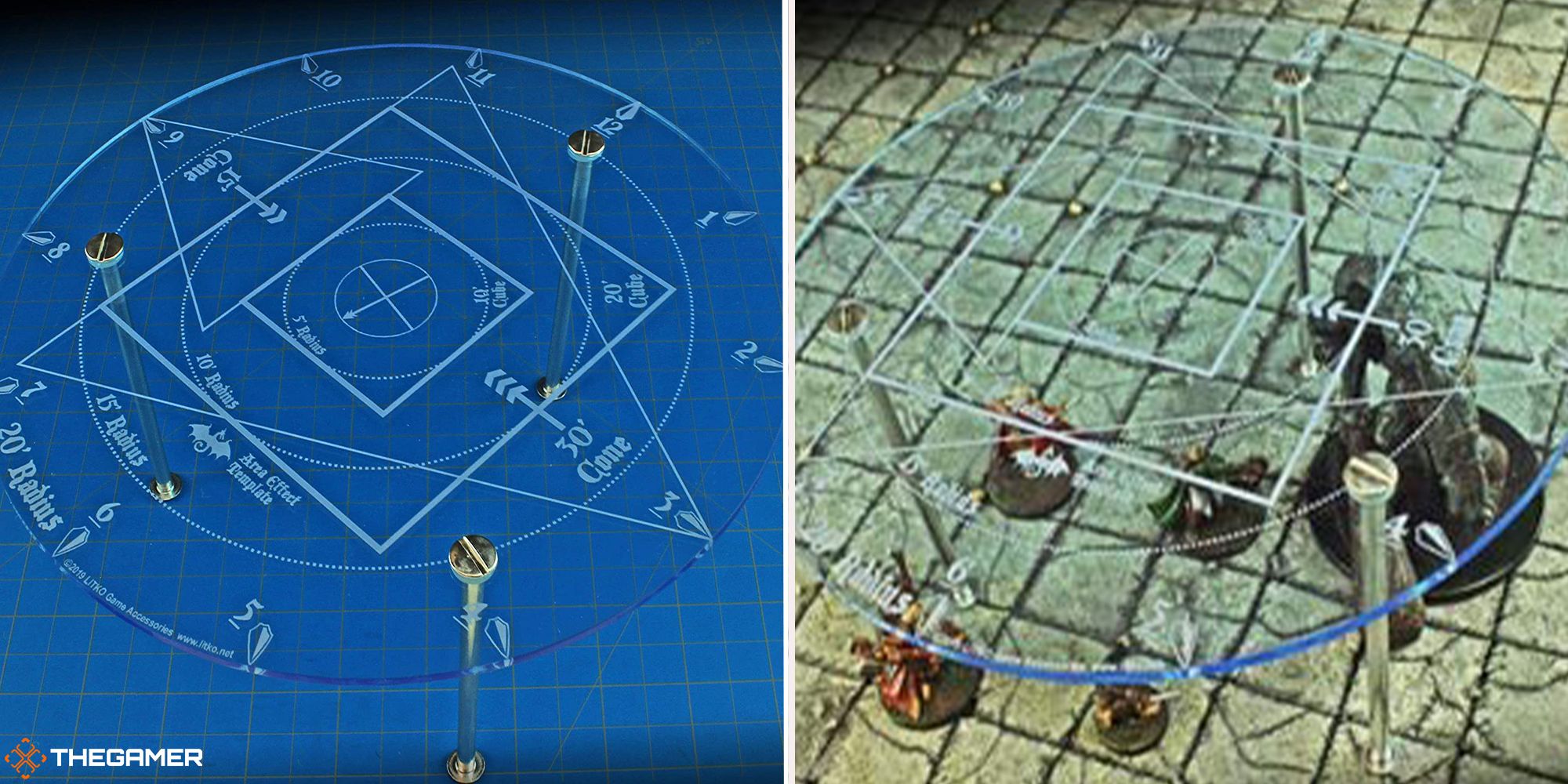 Do you find yourself counting distances a lot? It's a surprisingly important part of D&D since spells and weapons (among other things) often have a set range limit. It's made a little easier with battle mats and the like when you know that one square is equal to X amount in meters, but still more frustrating than it should be.

Enter: a transparent, elevated template that easily details distances for you. Since distance may be measured in a cone, a cube, or a radius, all of these are marked on the disk for ease of use. All you need to do is screw on the legs, and you're good to go. Made from durable acrylic, this features aluminum posts so you can elevate it over your figures and has nine AoE functions!