10 Best Tabletop Games To Play With Friends This Summer 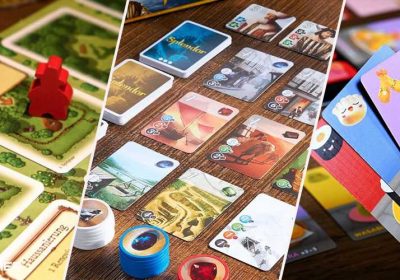 Tabletop games come in many forms. Whether they're pencil and paper, cards, tiles, boards, or some combination, the best ones all do one thing: engage a group of people into competition, comradery, and/or merriment. That's what we really cherish them for.

You don't need to (though you absolutely can) drop a lot of money to get a really excellent game. These are our absolute favourites that we know you'll enjoy playing with friends and family. Dive in and find something to make a buttload of treasured memories with! 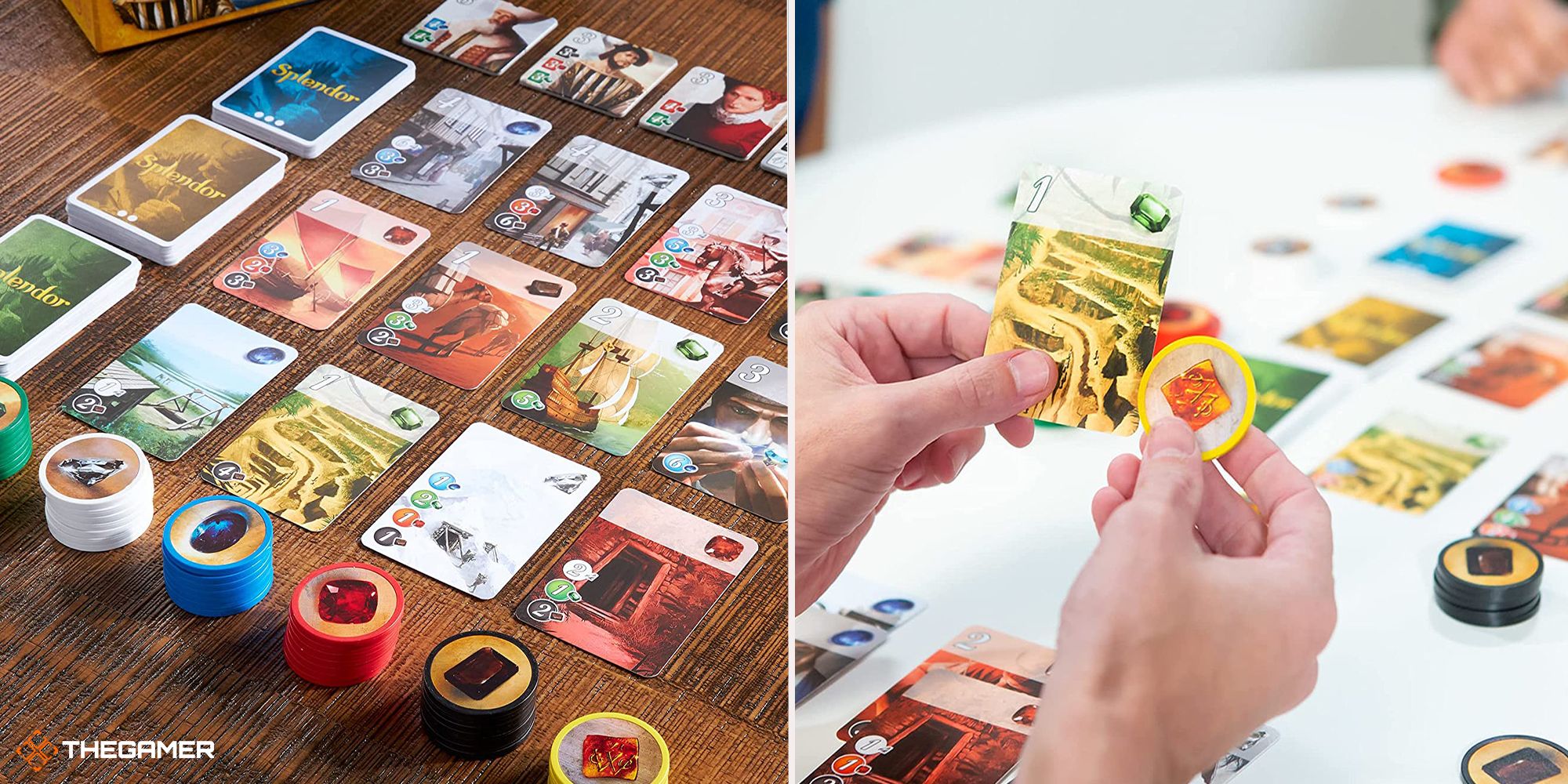 Splendor is a wonderful strategy card game in which you and the other players act as competing merchants during the Renaissance era. Your goal is to collect the gem cards and amass a greater fortune than your opponents.

This game is really easy to pick up and play for newbies – even younger kids – but it's pretty tricky to master; you're bound to have loads of fun and never get bored! As further proof of its excellence, it's worth noting that Splendor was nominated for and/or won dozens of awards after it came out, including the 2014 UK Games Expo Best New Boardgame and the 2016 MinD-Spielepreis Best Short Game. 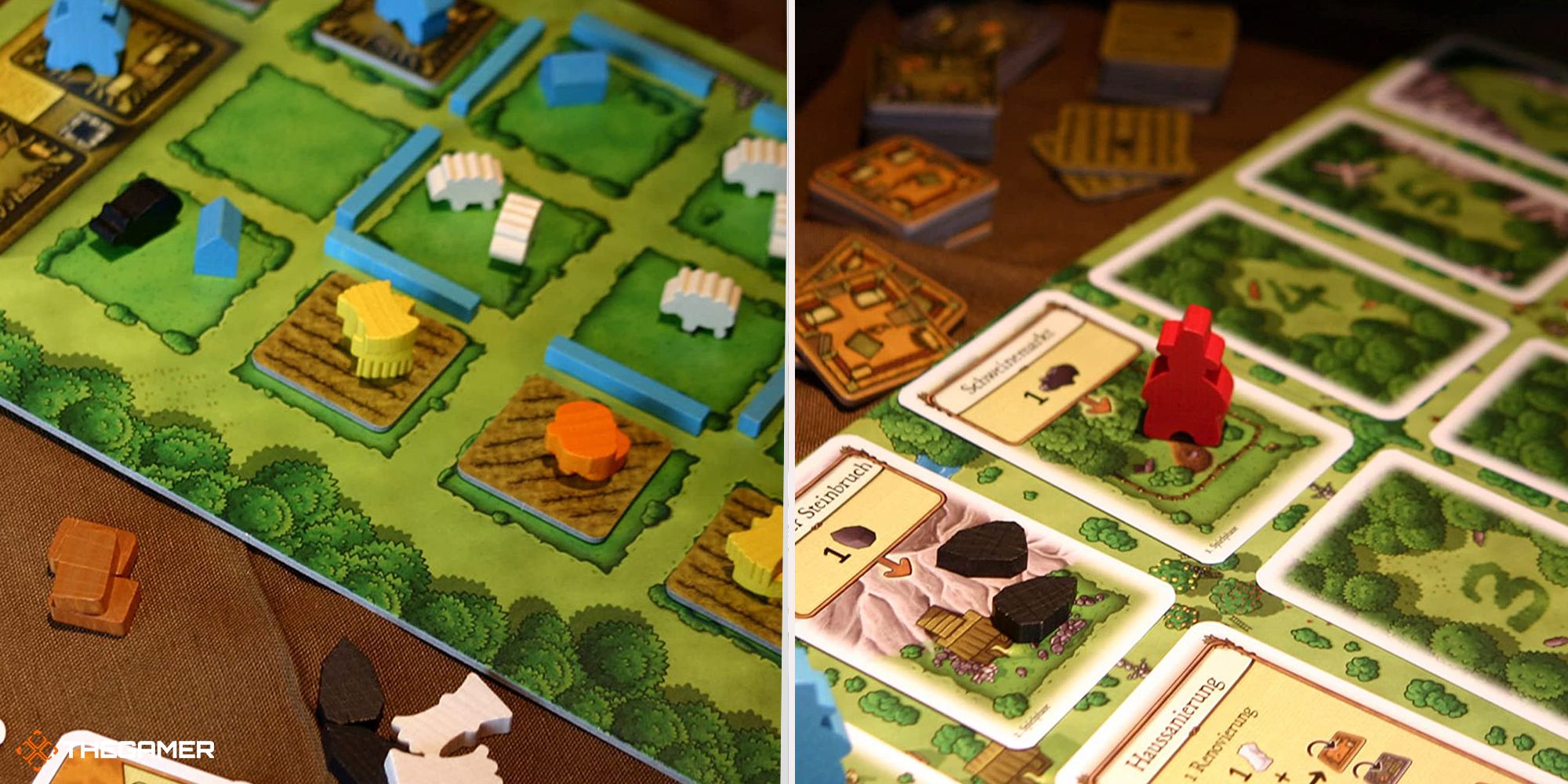 Agricola may not be as well known as some of the other games on this list, but it's absolutely deserving of a feature here. This board game places you in the role of a small farmer who is working to maintain their family, livestock, and property.

All the little pieces may seem daunting at first, but don't give up! It's easy to understand once you get going. As an added bonus, when you buy this, you don't even necessarily need any friends to play along with! Agricola can be played all on your own (though, we must say it's best experienced in a group). When you buy it, we recommend the Revised Edition that came out in 2016. 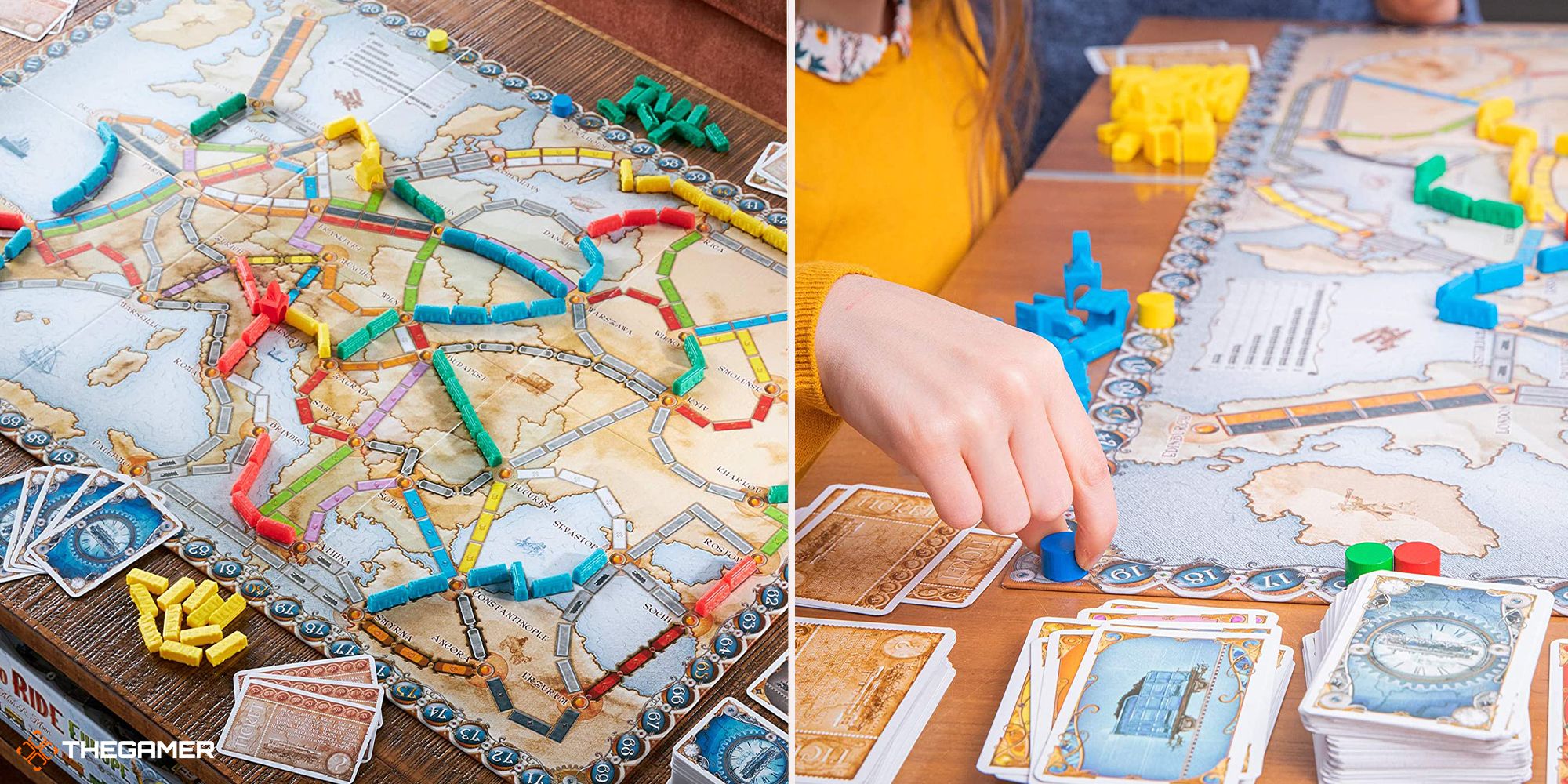 Depending on who you are, playing as a train manager in a board game may sound like boring monotony or a thrilling adventure – and we promise, it's the latter. In Ticket To Ride games, you compete with the other players to build railways across the world and earn points by successfully connecting particular locations.

Since it's been such a big success, you can build trains almost anywhere you want! Different versions of the game feature maps of entire countries, like America, individual cities, like New York, or huge regions, like Europe. Even though it's not the original version of the game, we recommend the Ticket To Ride: Europe version; a few rules had been added and tweaked by then, making it a better experience. 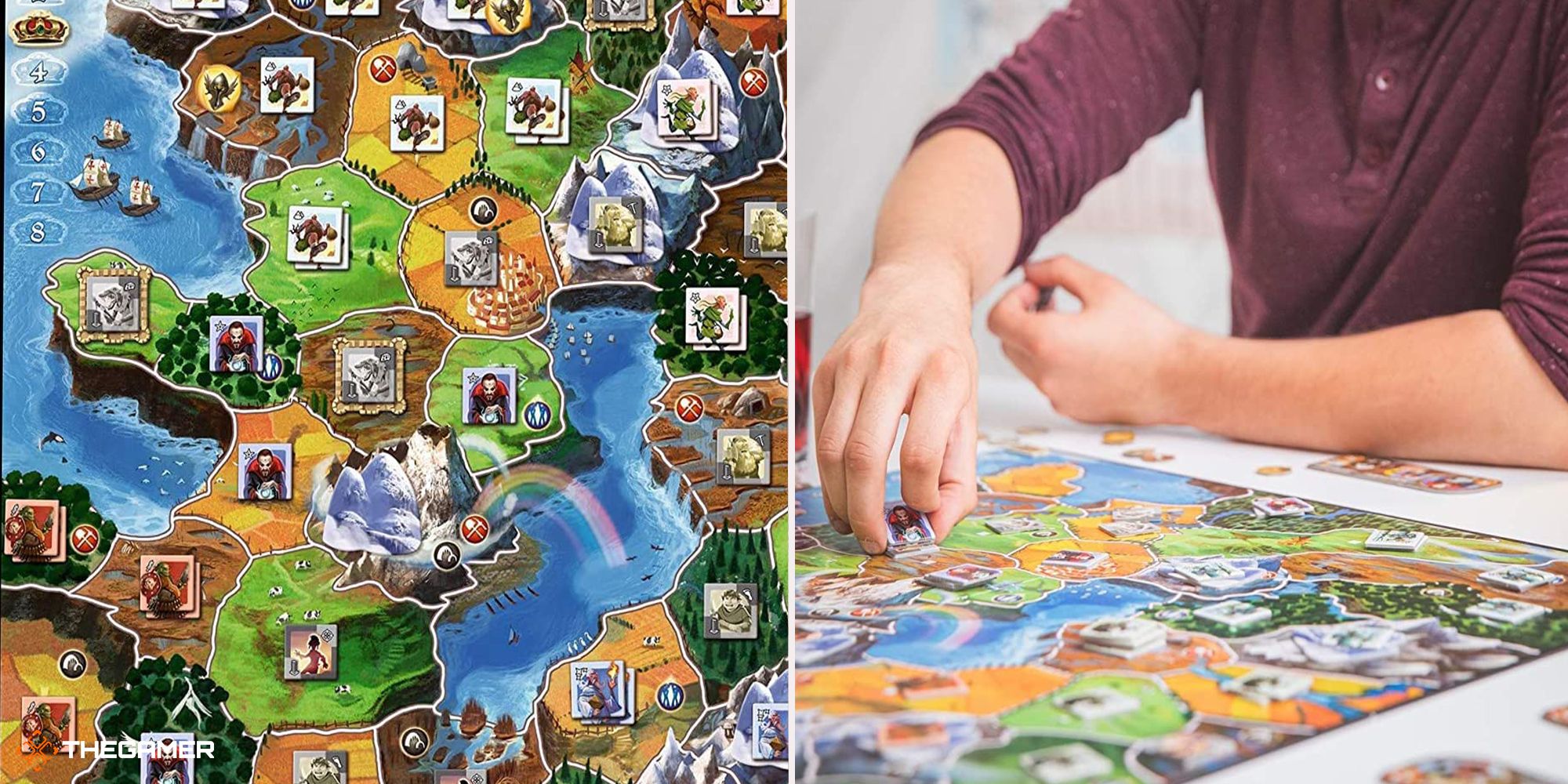 Small World is best described as: what if Risk was bearable to play? Don't get us wrong, Risk is a board game classic for a reason, but it takes an incredibly long time to genuinely finish a match and can't really keep up anyone's interest that long. Small World takes elements of Risk, as well as other strategy board games and the fantasy genre, to make something truly wonderful.

In it, you and your friends will play as fantasy races who are trying to take over the known world and that have been randomly combined with a characteristic. Seafaring Trolls? Merchant Zombies? Wealthy Elves? They're all possible. You use them to claim as much of the land as you can before you're spread too thin and must pick a new race entirely. 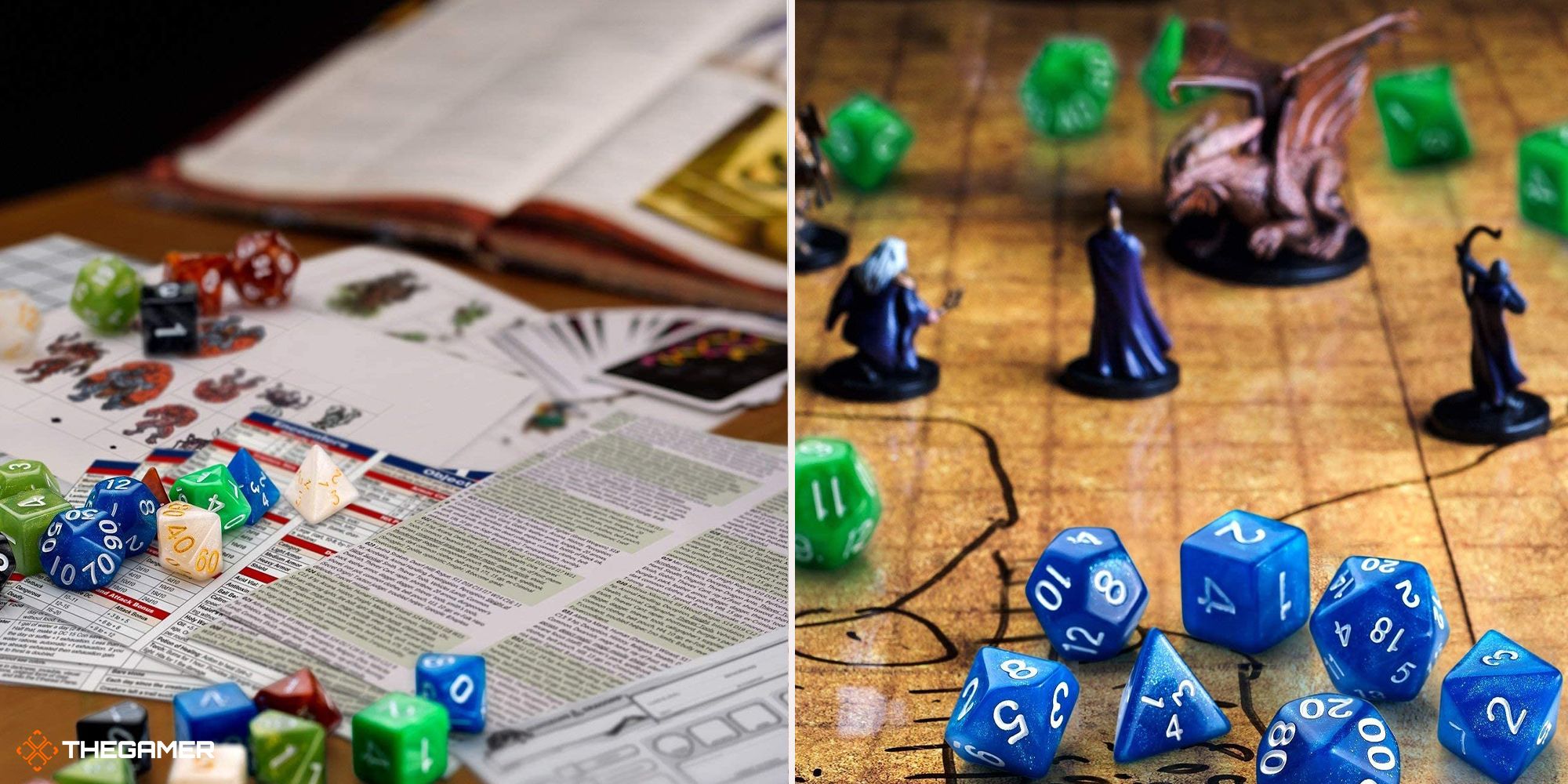 Dungeons & Dragons (D&D) is a classic tabletop game that's been around for decades. You probably know the drill by now, right? One player is the Dungeon Master (DM) who controls the story, narrating and improvising as they go. Everyone else plays characters who are attempting to solve the problems the DM introduces.

Some people prefer the roleplaying side of D&D, while others love the combat and stat optimization, and still others prefer a healthy dose of both sides. Whatever you think you might love about this entirely personalized experience, it's never too late to get started.

You can purchase Starter Sets which equip you with the rules and dice you'll need to venture into the unknown. They also include a pre-written adventure for the DM to chauffer your party through, so you don't need to feel pressured to make something up yourself. 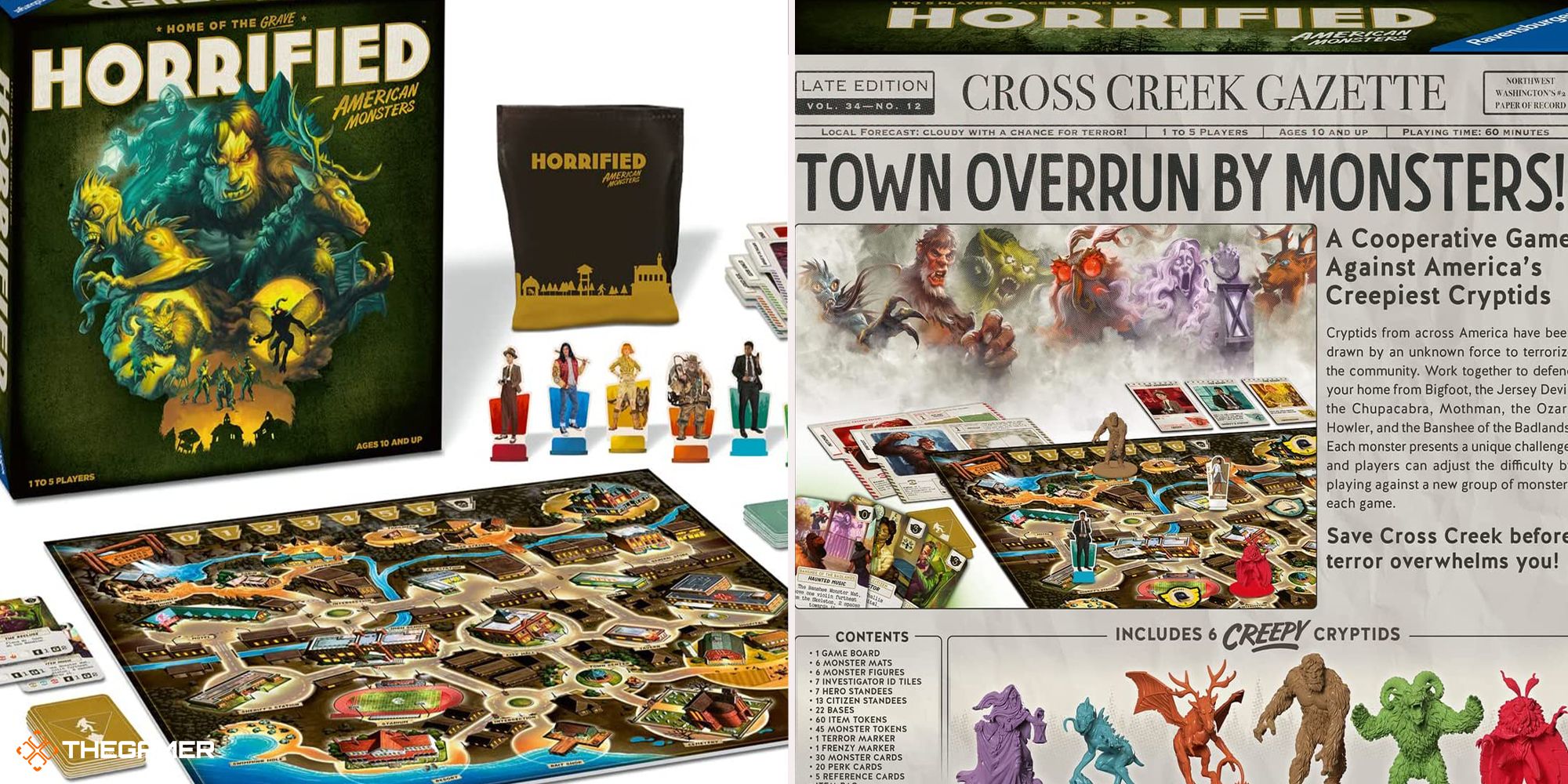 We at TheGamer first got the opportunity to try Horrified: American Monsters during the 2021 holiday season. This game places you in the role of monster hunters who are trying to save your town from the wrath of one or more classic, horrifying creatures of legend.

There are a lot of pieces, but don't get overwhelmed! It's just because there are lots of monsters to choose from, but you'll only be using one or two monsters for each game (meaning you don't actually need most of the pieces). Unlike most other games on this list, Horrified: American Monsters is a cooperative effort where you and your buddies succeed or fail together. 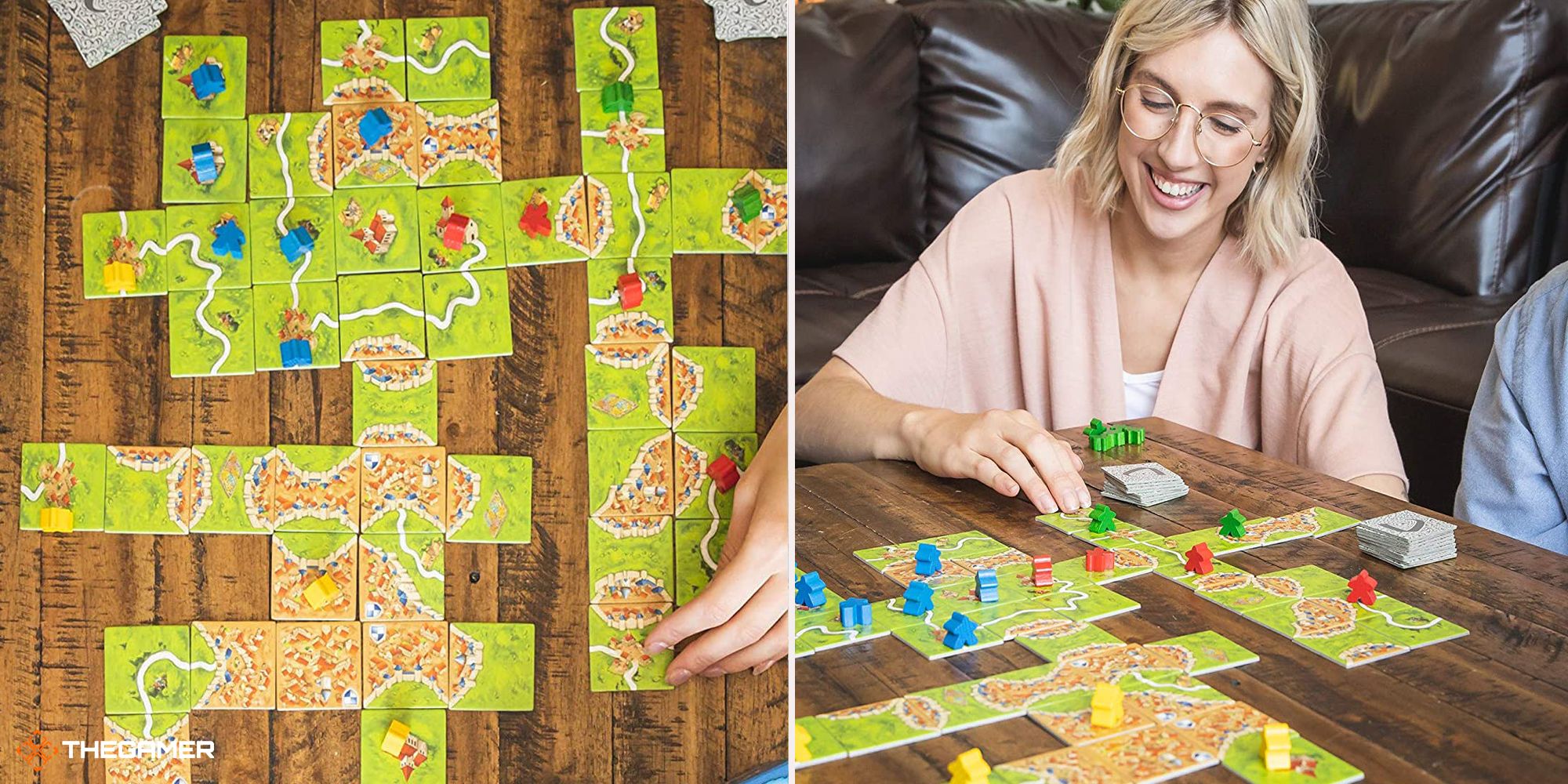 If you've been playing any board games more complicated than Sorry and Monopoly, someone has probably already recommended Carcassonne for you. It's a world-building game where players take turns placing tiles to create cities, roads, and farms.

We're recommending it again here because it might be the perfect time to pick up a copy! The basic game is really simple to learn and addictive to play. If you find yourself playing it often, you could even invest in some of the expansions that add new mechanics and problems to the gameplay! 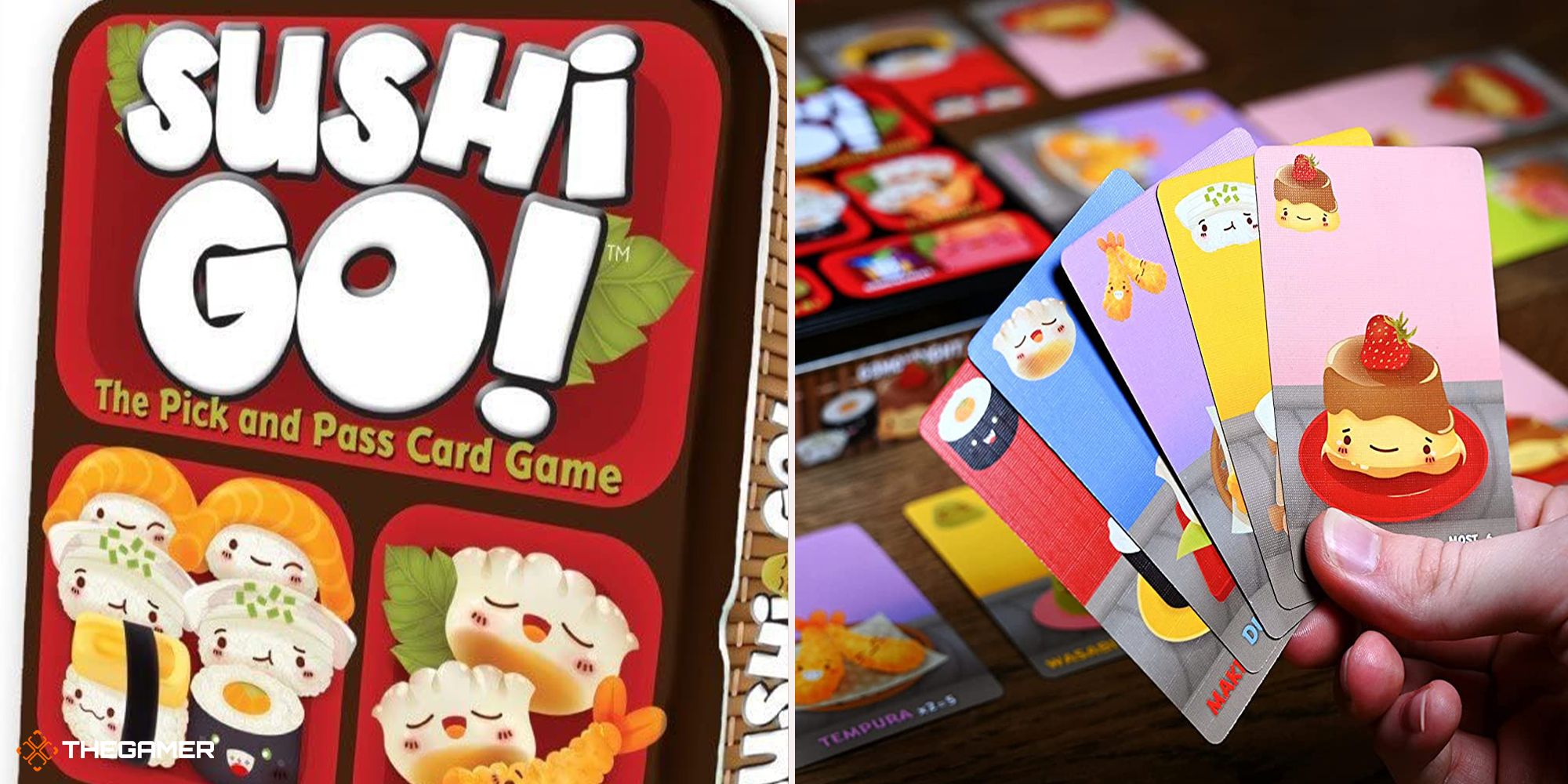 Sushi Go! checks all the boxes for a fantastic game night. Easy to learn? Check. Any number of players? Check. Lively and engaging? Check. Fodder for turning into a drinking game? Check.

Sushi Go! has players pass cards between one another and collect them slowly in order to win a lump sum of points once all the cards have been divided. It's really goofy and easy to get into; in our opinion, the rules are best taken loosely. We've heard of house rules that require players to count down as they choose cards or slam their chosen card down on the table as hard as they can before passing the rest off. 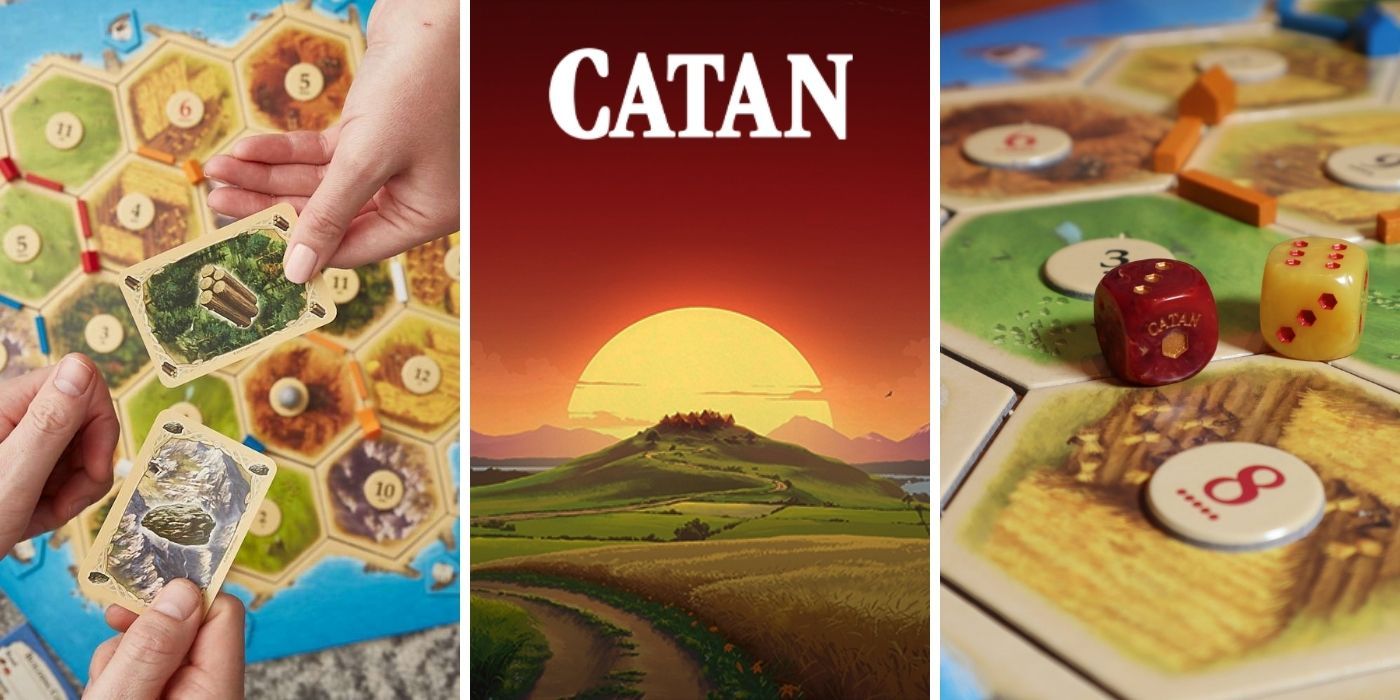 Could we talk about a game night with friends and not bring up Catan? It's become pretty popular in recent years, infiltrating the mainstream in a way only games like Monopoly had been able to do before. If you haven't already tried this out (or you have, but haven't bought a copy for yourself), now is definitely the time.

In case you're not aware, Catan puts you and the other players into the role of Settlers on an uninhabited island. You need to spend your time (and valuable resources) colonizing it under your own flag. Of course, if you're played out on Catan, we could hardly blame you. That's why we recommend you check out some of the game's best house rules that shake up gameplay a bit and/or personalize it to fit your table of family and friends. 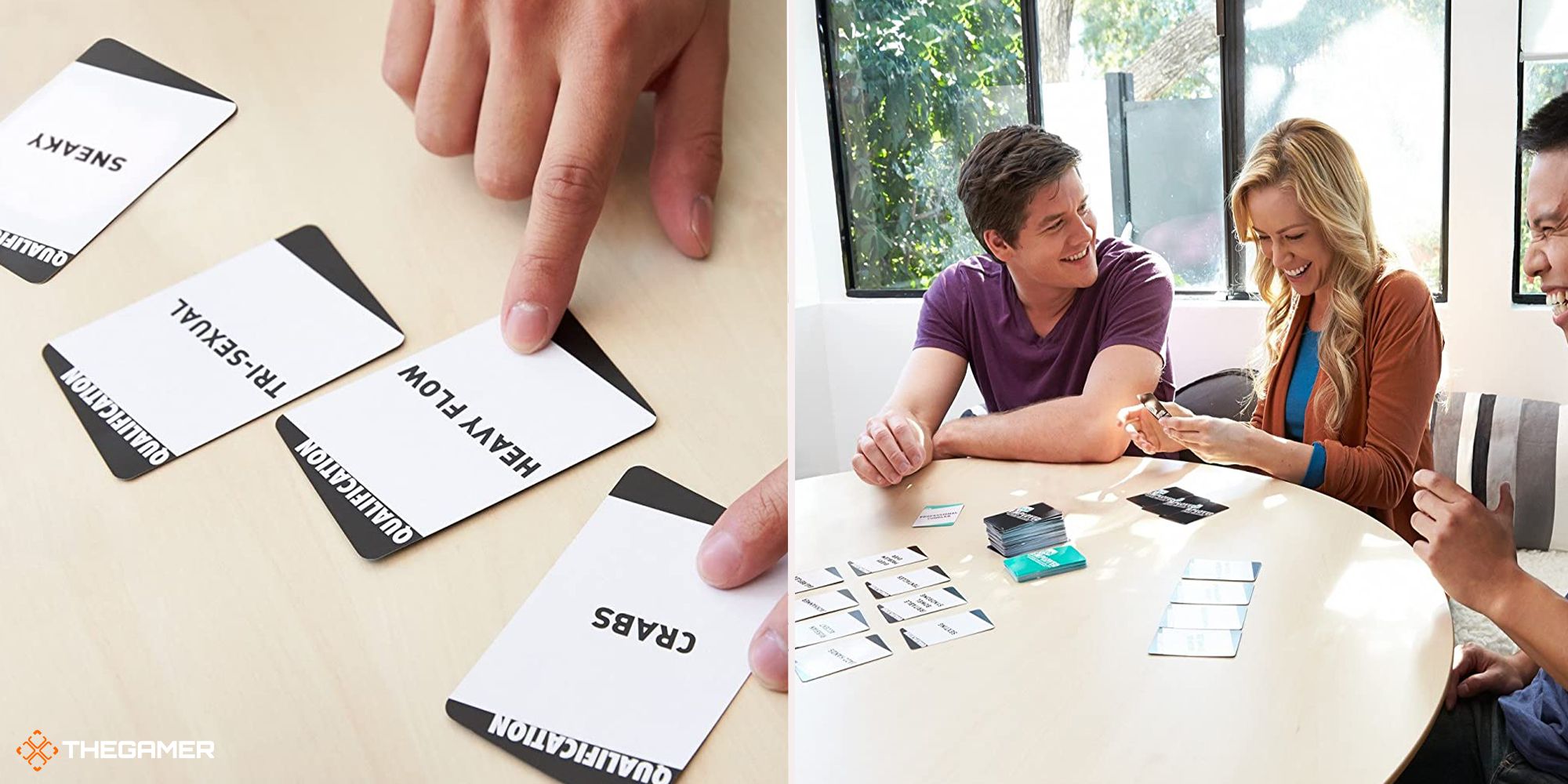 The card game Funemployed is unlike any other, and bound to keep your party lively. The only game pieces are the cards and your own acting abilities. One player takes on the role of a manager, while others act as potential candidates for a job who must sell themselves to the manager.

The twist? Each candidate has wacky characteristics that they need to justify to their potential employer. How would a lizard tail make you a better cook? How would a history as an assassin qualify you to be a nursemaid? We promise it'll be a surprise to learn which of your friends are secretly improvisational masters!