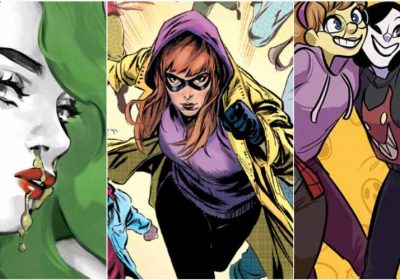 Comic books and video games have been buddies for quite some time. Whether it's games based on popular MCU movies – those thankfully stopped at Thor: The Dark World – or ones with entirely original universes, comic book video games are going strong to this day.

However, we are absolutely of the opinion that you can never have too many comic book video games. There are a lot of wonderful comics out there that are perfect for the video game treatment but perhaps lack the massive hammers, uncomfortably large muscles, and long flowing blonde hair required for a more action-orientated game. Basically, they’re not Thor. Instead, these comics would make for fantastic visual novels. 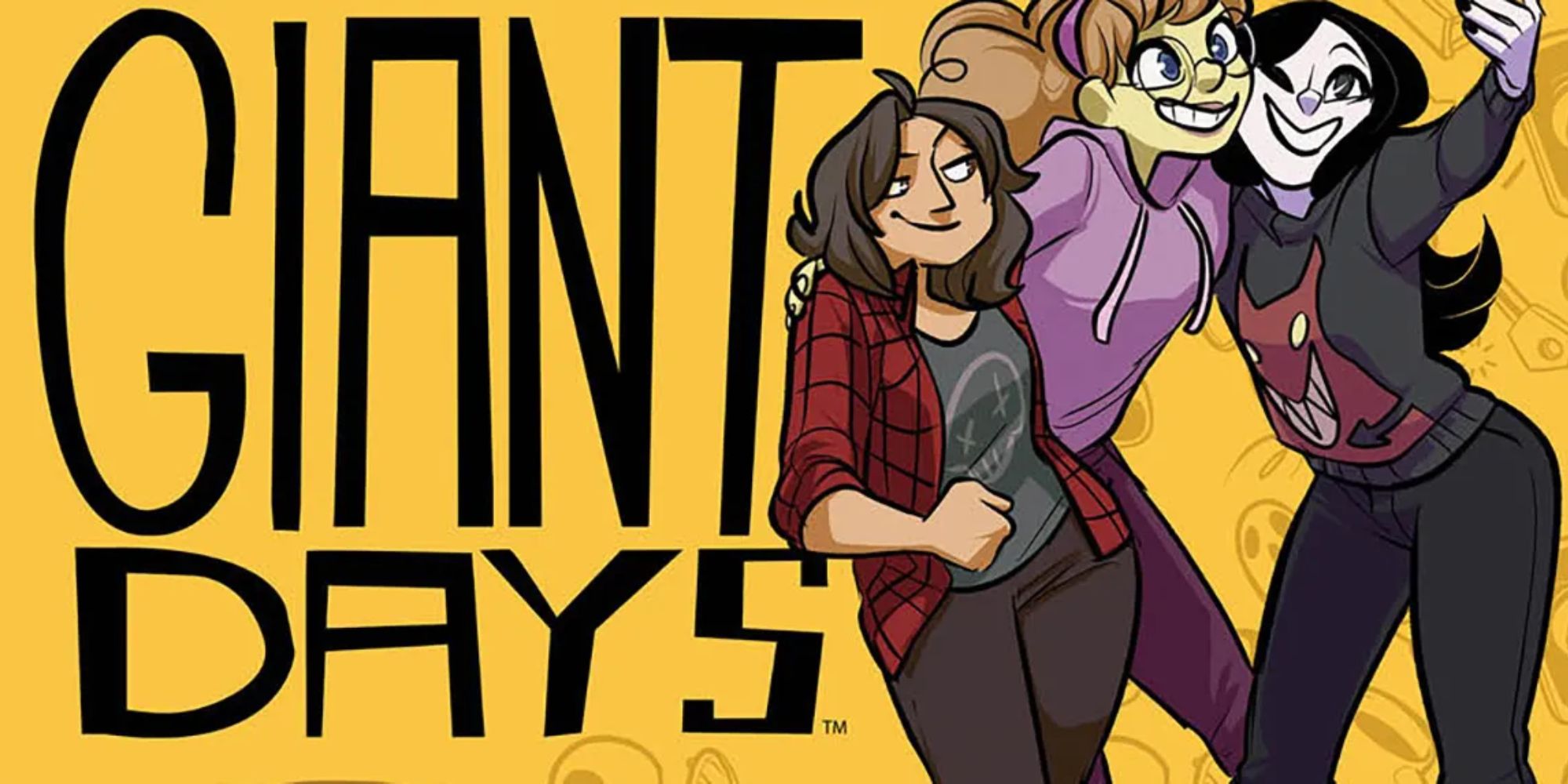 For those who don’t know, Giant Days is a remarkable comic book all about dealing with the everyday struggles of being a university student. Set in a somewhat Americanised version of the UK, Giant Days follows the lives of three students, Esther, Daisy, and Susan. They all have deeply relatable personalities and issues and struggle with fresher’s flu, painful breakups, turning 18, and coming to terms with their sexuality. It’s a wonderfully insightful comic that perfectly captures the nuances of university life, what it means to be a woman, and that messy age between childhood and adulthood.

Giant Days has all of the ingredients of a visual novel. First and foremost its art – which is phenomenal thanks to Disney’s own Lissa Treiman – is perfectly suited for a visual novel format. The backgrounds are incredibly detailed, and the characters are immensely expressive. Secondly, the individual stories of personal struggles, friendly banter, and forays into feminism that it so brilliantly explores are tied together by the overarching story of the characters and their relationships with one another. It is a very person-centered comic book that has a greater focus on writing and character development than action. It would therefore be far better suited for a visual novel than any other video game genre.

4 The Wicked + The Divine 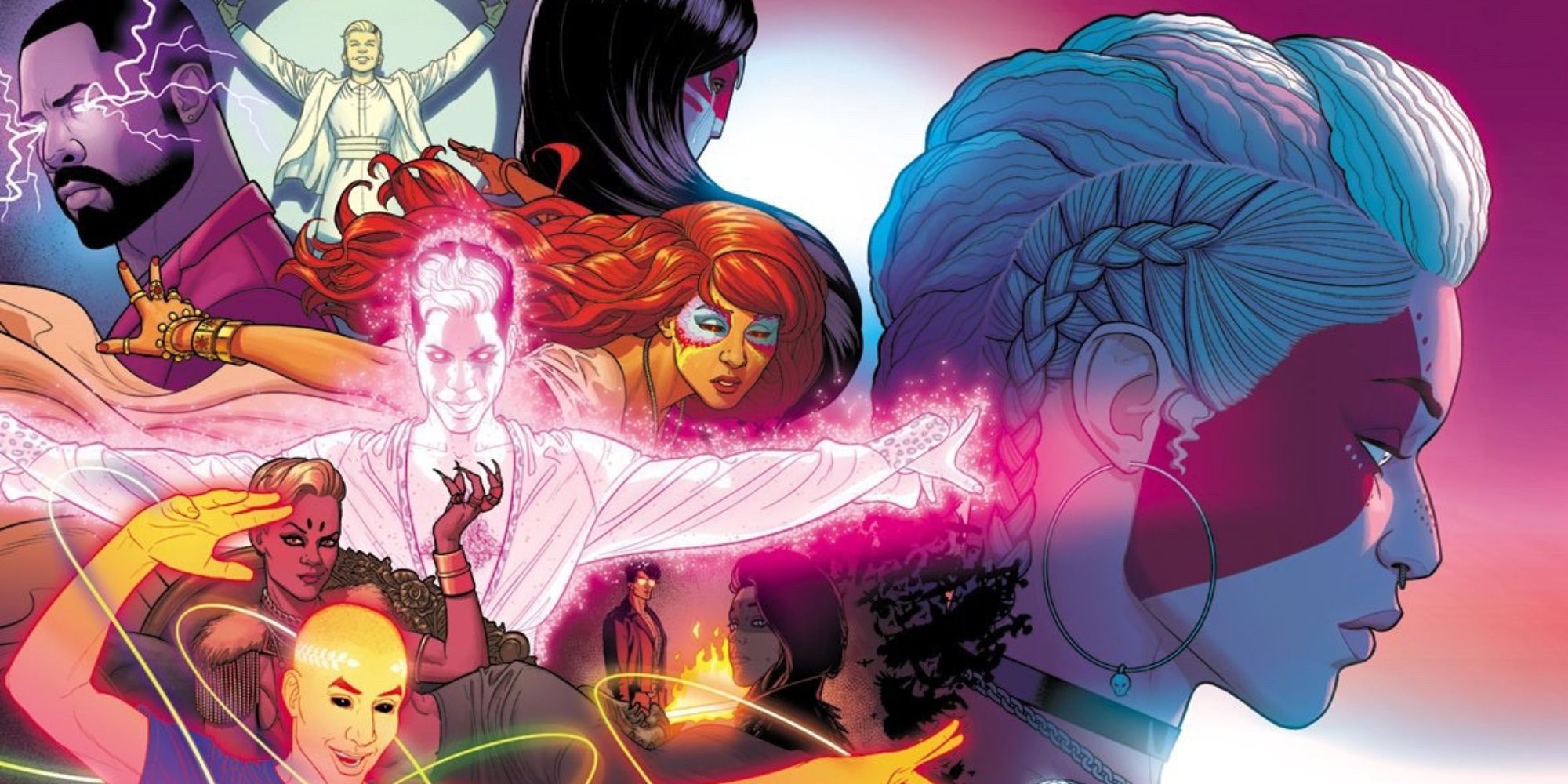 The Wicked + The Divine is a really fascinating comic that explores the corrupting power of fame within the context of reincarnated gods. If that sounds a bit full-on, it’s likely because it is. The Wicked + The Divine is an unrelentingly bleak comic that tackles difficult themes such as life, death, insecurities, and a deeply desperate desire for fame. Its cast of characters range from arrogant to sympathetic, but they’re rarely good people. However, this is what makes this unique comic so special. It is this more realistic look at what it means to be famous that grounds its fantastical narrative.

Beyond its obviously gorgeous artwork, The Wicked + The Divine has an incredibly engrossing story that simply wouldn’t work as anything other than a visual novel. While there are moments of action scattered throughout, The Wicked + The Divine is more focused on its core cast of characters and their impending deaths. Furthermore, because the comic is told from the perspective of an outsider who later becomes a more integral part of the unfolding events, there would be an accessible point-of-view for the player to adopt. If you also love a good twist then you’re absolutely in for a treat with The Wicked + The Divine. Of course, we’re not in the business of spoiling things for you, but trust us when we say the ending of this comic would make this a memorable experience. 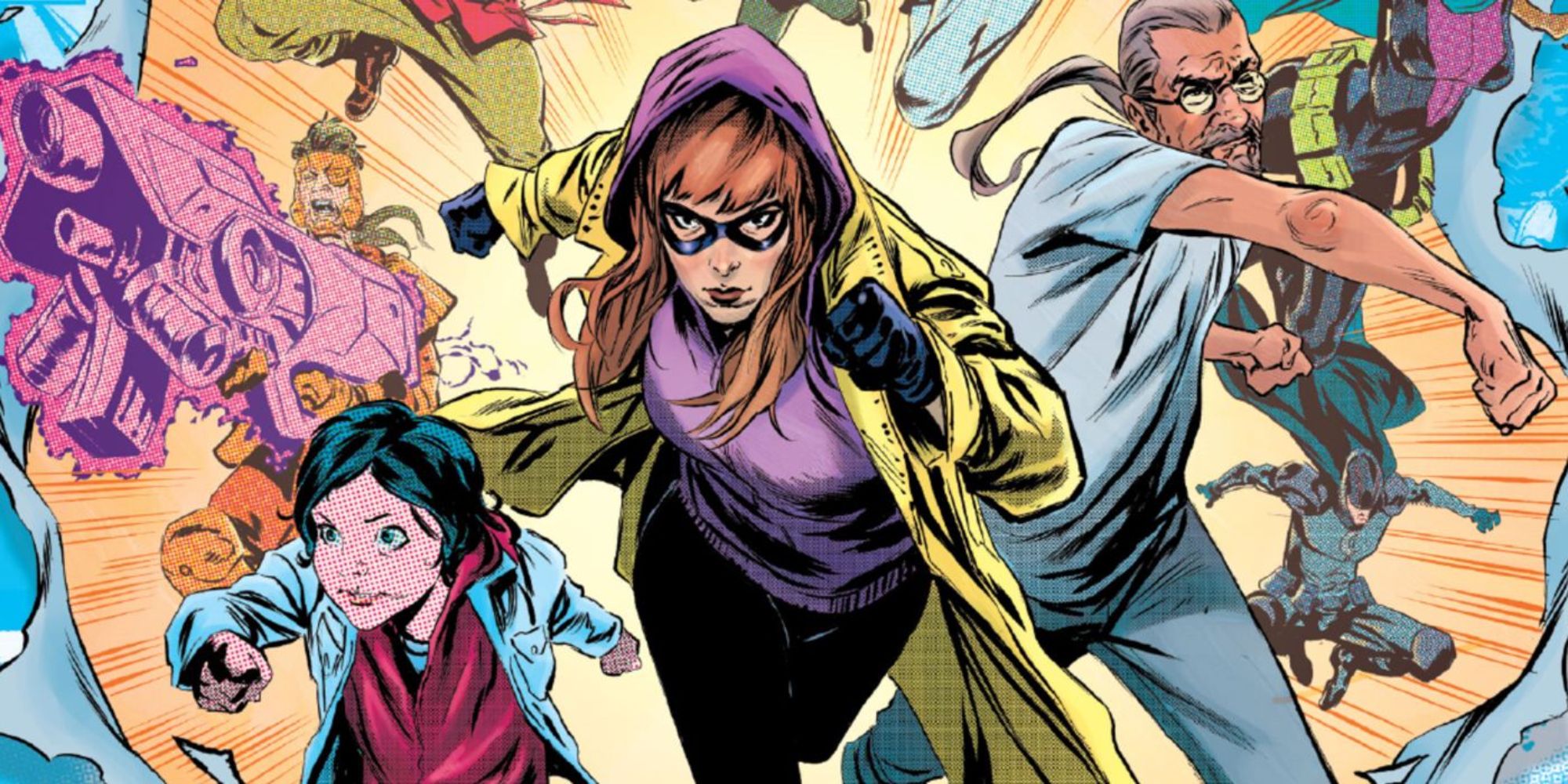 Crossover feels like an impossible comic book. It takes hundreds of popular superheroes from across dozens of real comics – we’re talking Superman, Spider-Man, Invincible, you name it – and plants them all into the real world. Of course, chaos ensues, and it turns out that the human race doesn’t take kindly to superheroes killing them, trashing up their cities, and just being super annoying. So, with the help of a few rebellious heroes, the everyday Joe takes out the misplaced comic book characters and locks them up for good. It’s a complex comic that takes something we’ve all dreamed of and looks at it through a far more realistic lens.

Of course, Crossover may not instantly seem like the perfect material for a visual novel. However, what would be a better fit for a comic book about comic book characters coming into the real world than a genre that is essentially interactive comic books? It’s super meta which only helps to intensify its overall narrative and commentary. You could even extend the plethora of comic book characters that appear to include some popular visual novel protagonists too, or even some additional superheroes who are very much in need of their own games. Of course, Crossover would translate fairly well to a visual novel format anyway. It’s character-driven, not too action-packed, and has absolutely gorgeous visuals courtesy of its talented team of artists. Whatever way you look at it, this is a no-brainer. Crossover needs a visual novel crossover immediately. 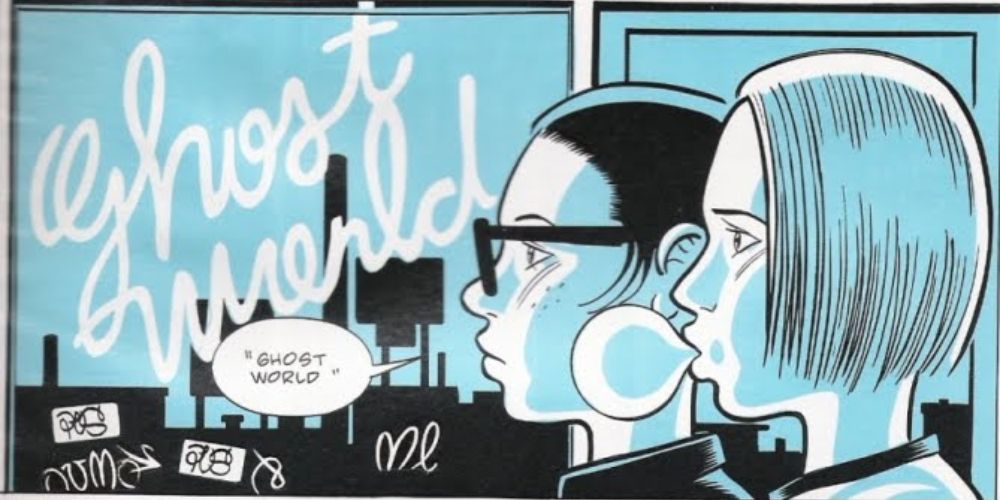 It’s rather amazing that Ghost World – or at least a variation on it – hasn’t been adapted into a visual novel already. Not only is its exploration of adolescence, friendship, romance, and life prime material for an introspective visual novel, but its art is so intricate and uniquely beautiful that it feels like it should exist already. For those who don’t know, Ghost World follows two intelligent, witty, and incredibly cynical girls named Enid and Rebecca as they try and figure out what to do now that they’ve finished high school. Throughout the course of the comic, their relationship suffers, they fall in love and begin to learn what is important in life.

Ghost World, much like Giant Days, is an incredibly relatable and often unflinching examination of young people and their relationship with the world. Having already been adapted into a movie – a really, really good one at that – Ghost World has proven that it can transcend the page. As a visual novel, those who find themselves more drawn to interactive media rather than reading can experience this one-of-a-kind narrative that may in fact motivate them to evaluate their own lives. Or, you know, just have a relatively fun time where they occasionally cry. 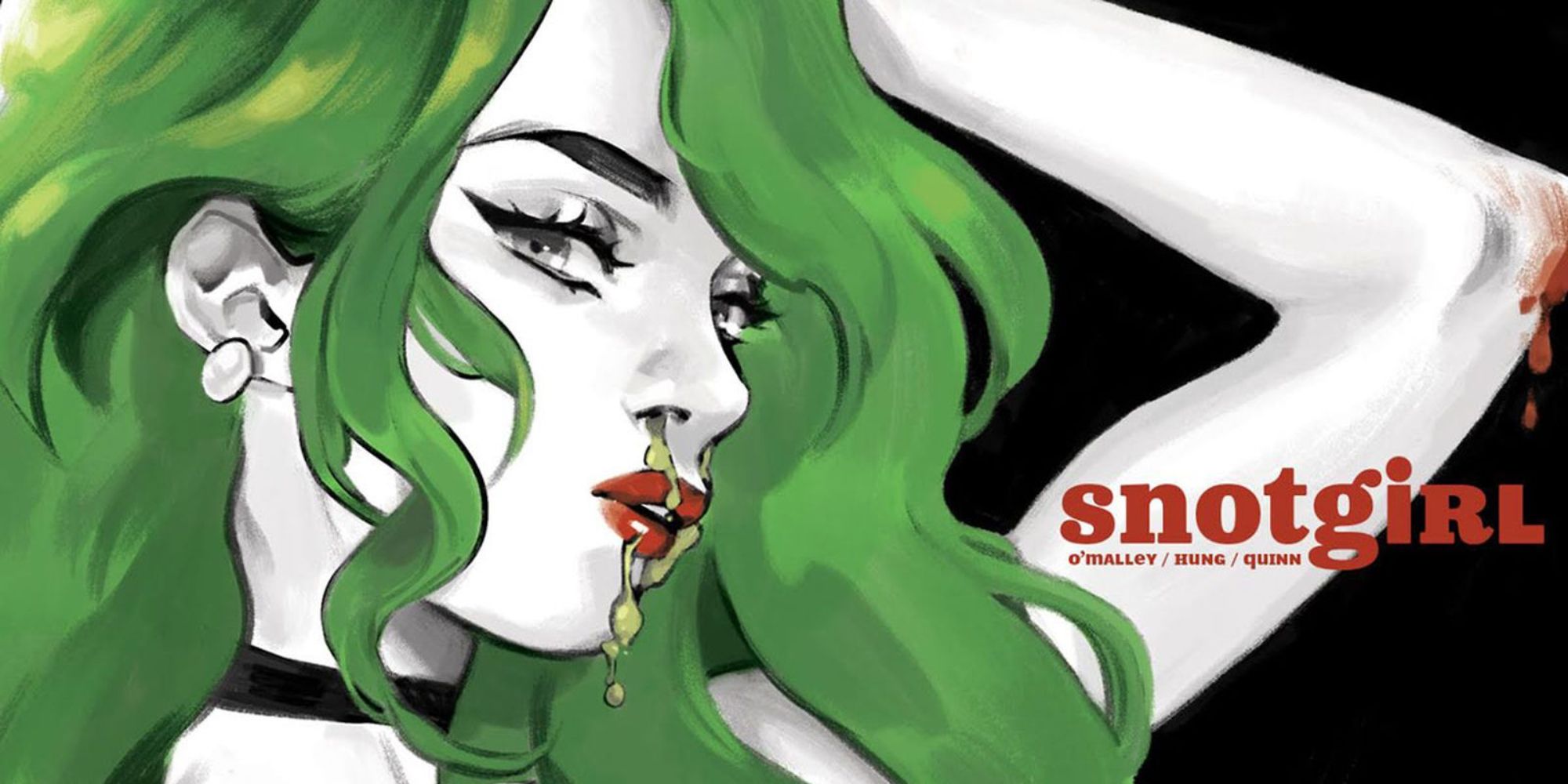 Snotgirl is the creatively named comic book about the superficiality of social media personalities. Following the story of the titular snot-filled woman, Lottie, Snotgirl explores the toxic duality of fame and the disparity between your onscreen personality and the less glamorous reality. Which is a very fancy way of saying it's like that one friend you have who posts awesome pictures of themselves on holiday looking incredibly trim but eats a tub of ice cream every day and still doesn’t have their life in order. Of course, Snotgirl goes way beyond that, contextualizing its narrative about reality within the fashion blogging sphere. It is a deep and nuanced study of a thoroughly unlikeable person dealing with the same insecurities a lot of us are very familiar with.

Of course, like with all of the entries in this list, Snotgirl has amazingly unique art that would translate perfectly to a visual novel format. However, what would make Snotgirl the perfect visual novel is its exploration of beauty. As a visual novel, Snotgirl – alongside being a commentary on social media – would almost work as a deconstruction of the rather unfortunate trope of exaggerating the female anatomy in visual novels. However you look at it, it’s fair to say that if this were to ever see the light of day, it would be one of the best comic book video games ever made.