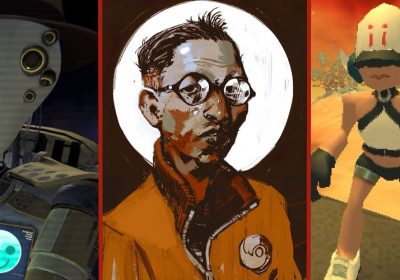 Indie game development has become the face of rebellious queer art. Every day on platforms like itch.io and Steam, smaller queer creators are making bigger, weirder, and more ambitious worlds than ever before. They challenge and blur concepts of genre and gender, and it's no surprise that many of the games from this growing movement are deeply rooted in science fiction.

After all, science fiction allows creators to explore the truths and functions of the universe, the possibilities of human understanding, and worlds yet uncovered. Even in our supposedly civilized society, queer artists struggle for visibility. This combination—the urgency for voice and the will to create—has led to incredibly bold sci-fi work the likes of which you won't find in mainstream gaming.

9 A Day of Maintenance

A Day Of Maintenance combines a 3D truck driving simulator, puzzle game, and visual novel. It's also possessed with romantic maturity that many visual novels aren't concerned with. You're already in love with your robot boyfriend, Orby, at the very beginning of the game. A Day Of Maintenance is not about the chase of affection, but about the highs and lows of life after obtaining love.

This game's delightful robot cast are gendered of their own desire, and grapple with what that means in a world that only wants them as servants. This oil-fueled rumination of the self is exactly the sort of introspective work that indie developers are best equipped to deliver.

Fans of intricate combo systems, colorful futuristic settings, and beefy boyfriends that fight together will find a lot to love in Heatwave. It is also a rare entity in that it is a multiplayer, competitive-minded fighting game, a genre not normally known for such broad inclusion. 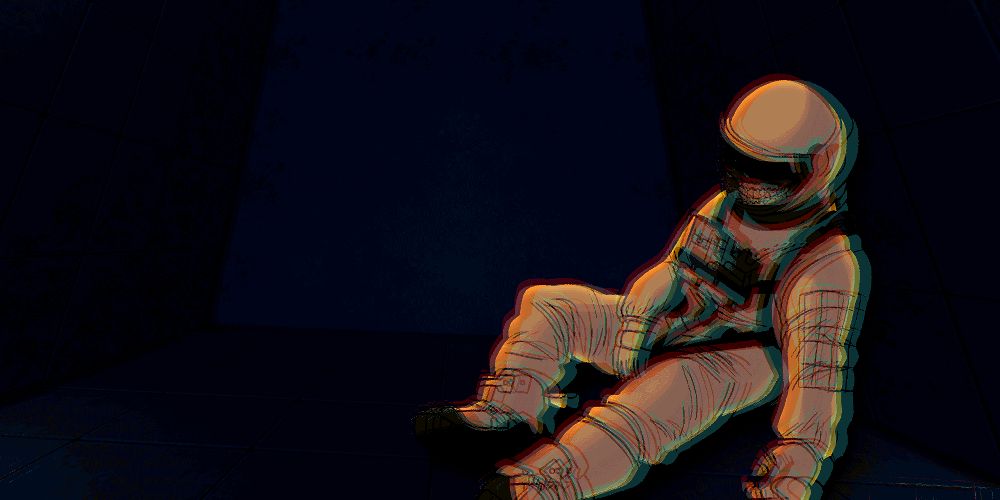 Horror has long served as fertile creative ground for the existential dread of queer creatives. It's also a natural fit for exploring humanity's natural fear of the great, starry beyond that science fiction dwells in.

That's the intersection that Leah Case's small but intense sci-fi-horror visual novel Lysogenesis plays with, and it does so with a glitchy intensity that compels the player along in its mystery. Lysogenesis is short but powerful, and as disorienting as it is clear articulation about the difficulty of dysphoria. 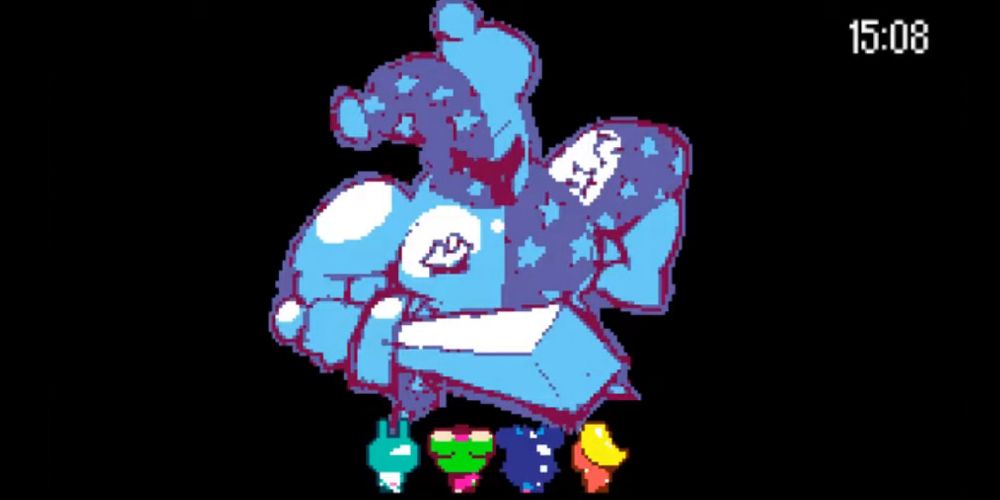 Despite its cartoony palette, Rxcovery's synopsis is the sort of trans humanist critique ripped right out of the pages of a Phillip K. Dick novel. You're Ezo, a hospital patient who only has enough money for about 30 minutes of life support. The world of Rxcovery is so heavily down the late-stage capitalist drain that the hospital has uploaded an AI into Ezo's dreams to earn more money to extend his life. 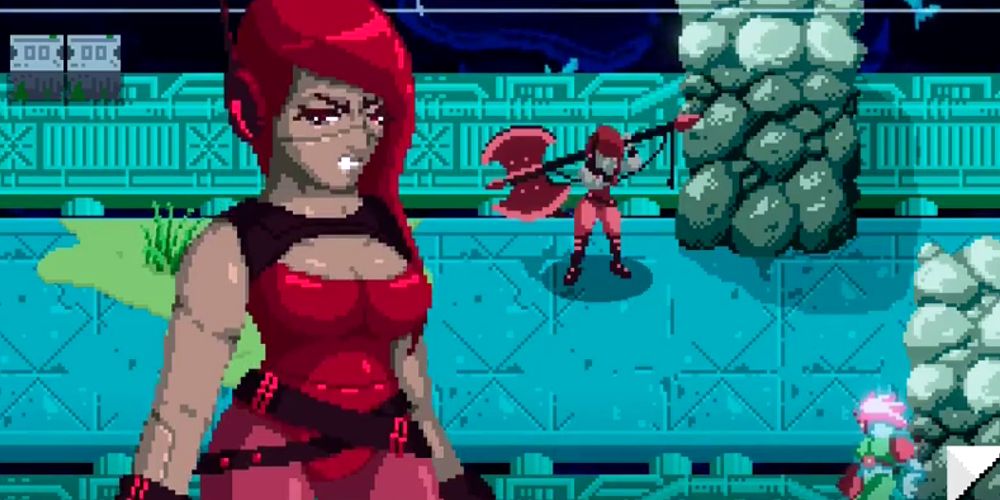 Pixel Punk's Unsighted is a post-apocalyptic, reflex-testing action-adventure game where robot girl Alma has two overarching goals: find your missing girlfriend, and figure out what's causing all your automaton friends to become reasonless, violent monsters. These are the titular Unsighted, and a very real threat to your progress and narrative experience, since anyone turn… if you let them.

Unsighted's central lesbians have a rivals-to-lovers story that, like many aspects of the game, has been told before. But thanks to some well paced writing—and the intense pressure of keeping your village's robo-friends alive—Unsighted manages to feel fresh, and treat its heroic robot lesbian protagonists with proper respect.

4 Heaven Will Be Mine 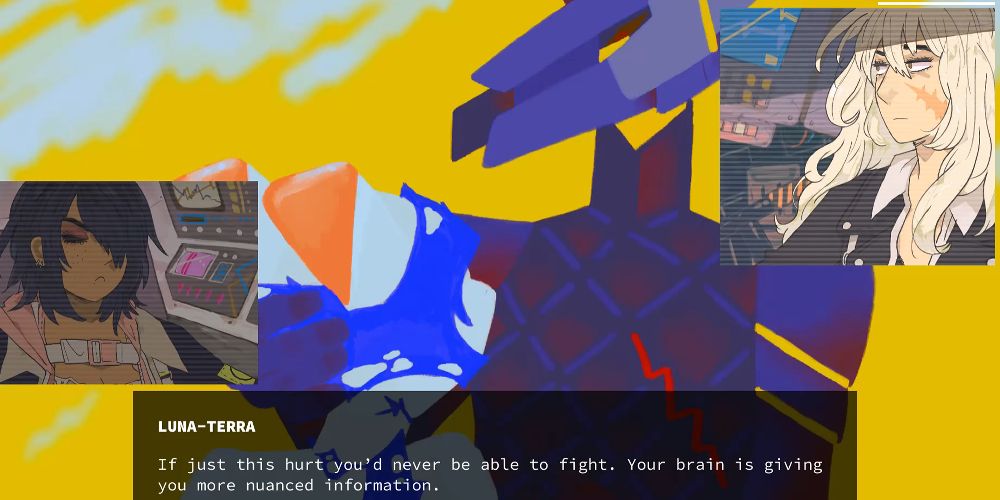 In an alternate history, 1980s, lesbian-powered mechs have saved humanity from "Existential Threats," and now the Earth wants the pilots to come home. Said pilots, having seen what life outside of Earth has to offer, refuse. As one war ends, another struggle begins—this time over the ownership of the mechs (called "Ship-Selves") and the agencies of those that pilot them.

Heaven Will Be Mine rebels against political institutions, chronological reality, and occasionally grammar. It does all this with an intentionality that defines the three queer protagonists and the universe they live in. The gravity of this charged visual novel may not be for everyone, but if you like your lesbians strong and rebellious (and understand that 'gravity' can be used liberally and outside the scope of its literal definition) than Heaven Will Be Mine is a must-play. 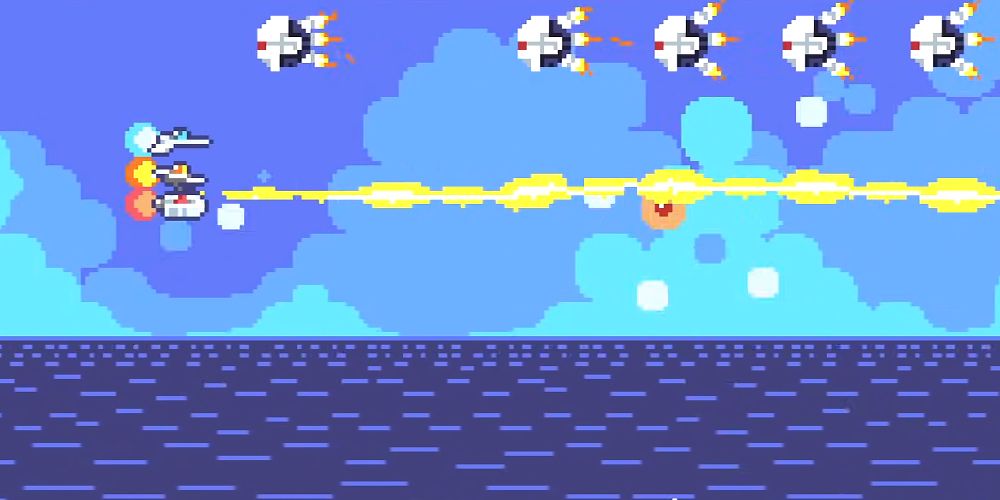 Before game developers PUNKCAKE Délicieux found an indie hit in the form of Shotgun King, they made a cute, queer little horizontal shoot-em-up called Spectrum Forces.

Spectrum Forces not only attempts to provide broad representation in terms of character design, they cleverly tie each of the nine character's "orientations" directly into mechanical aspects of the game. When in charge, each pilot has a formation they lead the surrounding ships into. There's as many combinations as colors in the rainbow, and it's up to you to find out what works best for you.

Disco Elysium is an alt-history dada-ist sci-fi role playing game that is as much about the murder case you're trying to solve as it is the identity crisis you're thrust into. Harry Du Bois wakes up with amnesia, and it is up to you to take this fragmented shell man and mold him into the cop you want him to be, regardless of what you find out about his past.

Disco Elysium is hardly a sanitized game, and the darkness it willingly finds jest in won't be for everyone. Where it finds queer interest, however, is in the main protagonist pair. Harry is a disaster of a bisexual regardless of how eagerly you explore his sexuality, and his gay partner Kim Kitsuragi has an incredible power over you. "You" in this case being both Harry, whom Kim frequently disarms with the mere twitch of a sarcastic eyebrow, and the player-base, whom Kim has become a fan-favorite of.

In Anodyne 2, you're, quite literally, born into your job of cleaning. You're a nano cleaner, a being created to shrink down to microscopic levels and clean out "nano dust" from the citizens of New Theland. As you do so, you learn about the world around you, the nature of the organization that employs you, and, most importantly, yourself.

Anodyne 2 is a dream-logic, queer dissertation on identity, purpose, and therapy. With an over-world in sprawling 3D and a gameplay system reminiscent of the 2D world of Link's Awakening, this game (which is, despite its sequel moniker, uses "2" in the Final Fantasy sense as a continuation of concepts, not narratives, from the original Anodyne) is a meditative experience somewhere between Hylics and a Charlie Kaufman film.