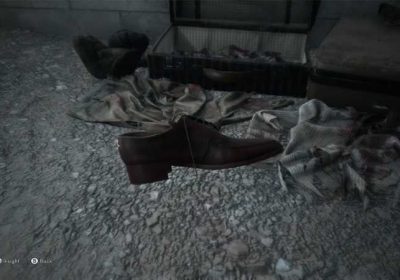 Bloober Team’s latest nightmare-inducing game, The Medium, is due to release later this month after being delayed last November (likely because it was originally going to release the same day as Cyberpunk 2077.) According to the developer, the game is aiming to be an experience in the same vein as psychological horror games like Silent Hill or Amnesia rather than action-horror games like Resident Evil. This means it’s probably going to be quite spooky.

For those of you who are excited to jump into this terrifying, psychic adventure, a new gameplay trailer was released today that shows off some of the game’s mechanics and ghostly world. There’s also a shoe that just randomly screams in your face for like 10 seconds.

The trailer starts with the titular screaming shoe and then moves on to other weirdness. The main character, Marianne, can travel between the real world and the spiritual realm. What’s interesting is that when she communicates with the other side the game doesn’t simply cut between the two realities. Instead, the game shifts to a split-screen and has you controlling Marianne in both planes of existence. It sort of looks like you’re playing a couch co-op game with yourself.

In the living world, Marianne seems to not have many abilities outside of interacting with objects like doors and bolt cutters. In the spiritual world, she seems to be able to harness spiritual energy to solve puzzles and open up new areas. She can also enter into an out-of-body experience that allows her to explore the ghost world further by separating her spiritual self from her physical form.

As for the story, the strange girl with the masked face seen in other trailers shows up. Her name is Sadness and she’s as creepy as you’d expect a ghost girl wearing a broken porcelain mask to be. Masks seem to be a motif of The Medium’s spiritual world as one section of the trailer shows Marianne investigating a hallway filled with various masks that represent the broken spirits of murder victims.

As for who or what did the murdering and spirit-breaking, a large, translucent figure stalks Marianne for most of the latter half of the trailer. It’s safe to assume that’s the antagonist or at the very least a very formidable enemy. We also know that this baddy will be voiced by Troy Baker (aka the guy who voices almost every character in every game ever.)

Bloober Team has a long and storied history of making terrifying horror games. They’re the company behind both Layers Of Fear games, the more cyberpunk than Cyberpunk 2077 sci-fi title Observer, and 2019’s dog-petting simulator The Blair Witch. The Medium is shaping up to their most ambitious project yet. If this trailer is anything to go by, this could be a big hit for horror fans.

The Medium is due to release on January 28 and will be available on PC and as a console exclusive on Xbox Series X/S.