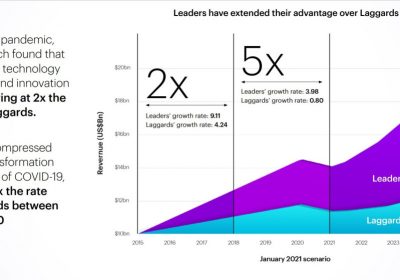 The divide between organizations that derive maximum financial benefit from IT investments and comparative laggards is widening in the wake of the economic downturn brought on by the COVID-19 pandemic.

Accenture today published a report based on a survey of 4,300 business and IT leaders that finds industry leaders are now growing revenue at 5 times the rate of rivals that have not invested as much in IT. That’s twice the growth rate a similar Accenture study found in 2017. Leaders represent the top 10% of that sample, while the bottom 25% are considered laggards.

Cloud security and internet of things (IoT) technologies tied for top areas of IT investment among leaders, followed closed by hybrid cloud (68%) and AI and machine learning (59%), according to the survey. Nearly two-thirds (65%) of leaders have also prioritized flexible work arrangements using digital technologies, the survey found.

But while Accenture identified many of the same leaders in the two reports, in this report the consulting firm also identified 18% of the organizations it surveyed as “Leapfroggers,” defined as companies whose aggressive investments in digital transformation initiatives are having a significant impact on revenues.

The existence of a leapfrogger category proves it’s not too late for laggards to make strategic investments in IT that will enable them to compete more effectively, said Ramnath Venkataraman, global lead for Integrated Global Services at Accenture Technology.

Overall, leapfroggers increased their investments in advanced and emerging technologies by 17%, the report finds. For example, 80% of leapfroggers had already adopted some form of cloud technology by 2017, but that figure rose to 98% by 2020. More than two-thirds of respondents (67%) said their organizations are also seeking to aggressively increase revenue from non-core lines of business.

It remains to be seen to what degree industry laggards will be able to remain viable in the face of more aggressive competition, even as the global economy continues to improve, Venkataraman said. Leaders and leapfroggers both cited leadership that has made a strategic commitment to invest in IT to become more competitive, he noted. In the absence of that commitment, Venkataraman said it will become even more difficult for laggards to close a gap that will widen as AI technologies are employed more widely.

Another attribute leaders and leapfroggers share is that they have narrowed the divide between IT and the rest of the business, Venkataraman said. IT in these organizations is now tightly integrated into the business, he noted.

Laggards that want to become more competitive will need to not only become comfortable taking on additional risks, they will also need to migrate as many legacy platforms to the cloud as possible to become more agile, said Venkataraman. As part of that effort, it’s critical for these organizations to honestly assess their current digital capabilities, he added.

Venkataraman said the pandemic has overall shown how much more resilient organizations that make the right strategic IT decisions can be in the face of great economic uncertainty. Many of those organizations will soon be in an even better position to capitalize on those investments as governments around the world continue to stimulate the economy, he added.

Of course, no one knows for certain what the future may hold. But organizations that consistently invest in IT have shown an ability to pivot in the face of adversity that rival organizations can now only envy.