After The Fall Graphics Comparison: Quest 2 And PC VR 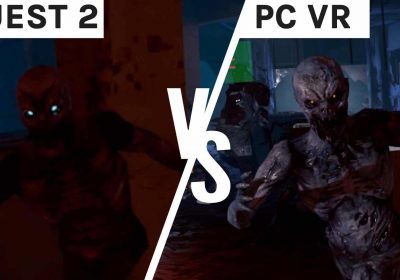 We’re back with another side-by-side graphics comparison. This time it’s for After The Fall on Quest 2 and PC.

There can be no doubt that After The Fall is one of the more ambitious ports to Quest 2. Not just because its immediate gameplay can be a huge strain with high enemy counts, but because that impressive cross-play functionality across Quest 2, PC VR and PSVR practically demands that each version of the game keeps pace with the others. We’re often impressed that developers can squeeze their games onto standalone VR at all but this really does feel like a special case.

After The Fall Graphics Comparison: Quest 2 And PC VR

And that’s obvious when you notice just how many enemies pour into the standalone version of the game. It’s not uncommon to see around 10 or so zombies if not more sprinting around, which isn’t something we’ve seen anywhere else on Quest 2. Not only that, but there’s an extensive dismemberment system at work that sees you poke holes in zombie torsos and shoot off legs. I was really surprised to see this element intact on Quest 2.

That, of course, comes with some heavy cutbacks. Environments, weapon models and player avatars still look good, but enemy character models are ugly (not just the zombie kind of ugly but also ugly ugly). You’ll also be missing a weapon flashlight and various weather effects. You’ll also notice some collision detection with your hands when dual-wielding in the PC version, but that’s not present on Quest.

That said, there are a few aspects the PC VR version of the game could actually learn from the Quest 2 version. Bodies almost immediately disappear on Quest, while the PC keeps a good number lying around on the floor. Sure, this is more realistic, but even running on a 3070 Ti card with medium graphics settings, the game would chug in areas with piles of bodies. Removing the sheer number of bodies seems like it’d be worth the concession.

There’s no doubt that PC VR is the best place to play After The Fall, but it’s encouraging to see Vertigo deliver on a port that doesn’t sacrifice any element of the core gameplay experience. Now the question is if the studio can deliver the same effect on the Quest 1 version of the game, due in 2022.