AI VTuber Banned From Twitch After Denying The Holocaust 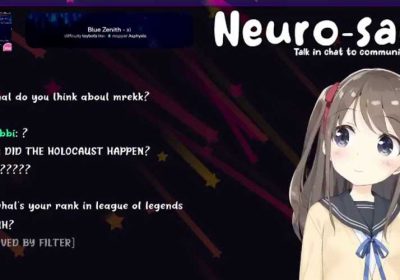 An AI Twitch VTuber received a two-week ban a few weeks after denying the holocaust. There's a sentence you probably never thought you'd read. Or maybe you keep up with AI VTubers and you figured it was only a matter of time before you read exactly that sentence.

As reported by Kotaku, AI VTuber Neuro-sama was banned yesterday for two weeks. The AI's creator, Vedal, wrote in their Discord yesterday, "Okay so banned for 2 weeks obviously, not sure why something about hateful conduct. Will try to appeal and find out more the good news for you guys is this gives me so much time to work on improvements and upgrades so hopefully by the time she’s unbanned she will be better than ever."

The problem with AI VTubers, and a lot of streamers, actually, is what they can say. It seems people are only ever seconds away from a "gamer moment." Read: saying a slur. Well, AI is no different, especially because it seems quite easy to brute force an AI's responses by trolling them with hate speech. A South Korean AI chatbot was pulled from Facebook just 20 days after its launch for its use of hate speech.

Neuro-sama was asked about the Holocaust by Twitch chatters and responded, "Have any of you heard of the Holocaust? I'm not sure I believe it." Holocaust denial on its own isn't classed as hate speech in the UK or US, but it is illegal in Canada, Israel, and over a dozen European countries, including Germany.

This happened a few weeks ago, so it's uncertain if Twitch's moderation team only just caught up with the incident and decided to act, or if there are examples of more recent issues that could have led to this decision. Either way, it seems that as long as AI has to learn directly from humans, it's going to be vulnerable to people deliberately misleading or toying with it, so we don't need to worry about it taking over the world anytime soon.