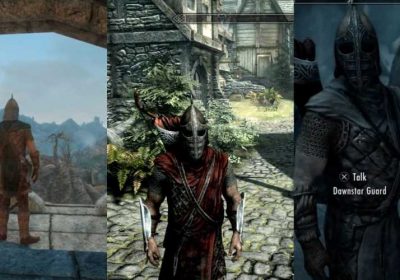 There may not be such an iconic group of NPCs as the Skyrim Guards. From their distinct northern accent, to their repeated quips, they are the source of enumerable memes, mods, and more. However, there is something a bit lame about them. They all wear the same uniforms. Which, while sort of the trademark for the game, leaves a little to be left desired.

Their saving grace is their colors, and most importantly, their shields. These are the only scarps of uniqueness we get – and while only making a marginal difference, it gives us a chance to rank all the Hold Guard Uniforms. Let be clear though, we love our guards and are happy to have them protect us from dragons, thieves, and irritated Dragonborns – or at least try to. 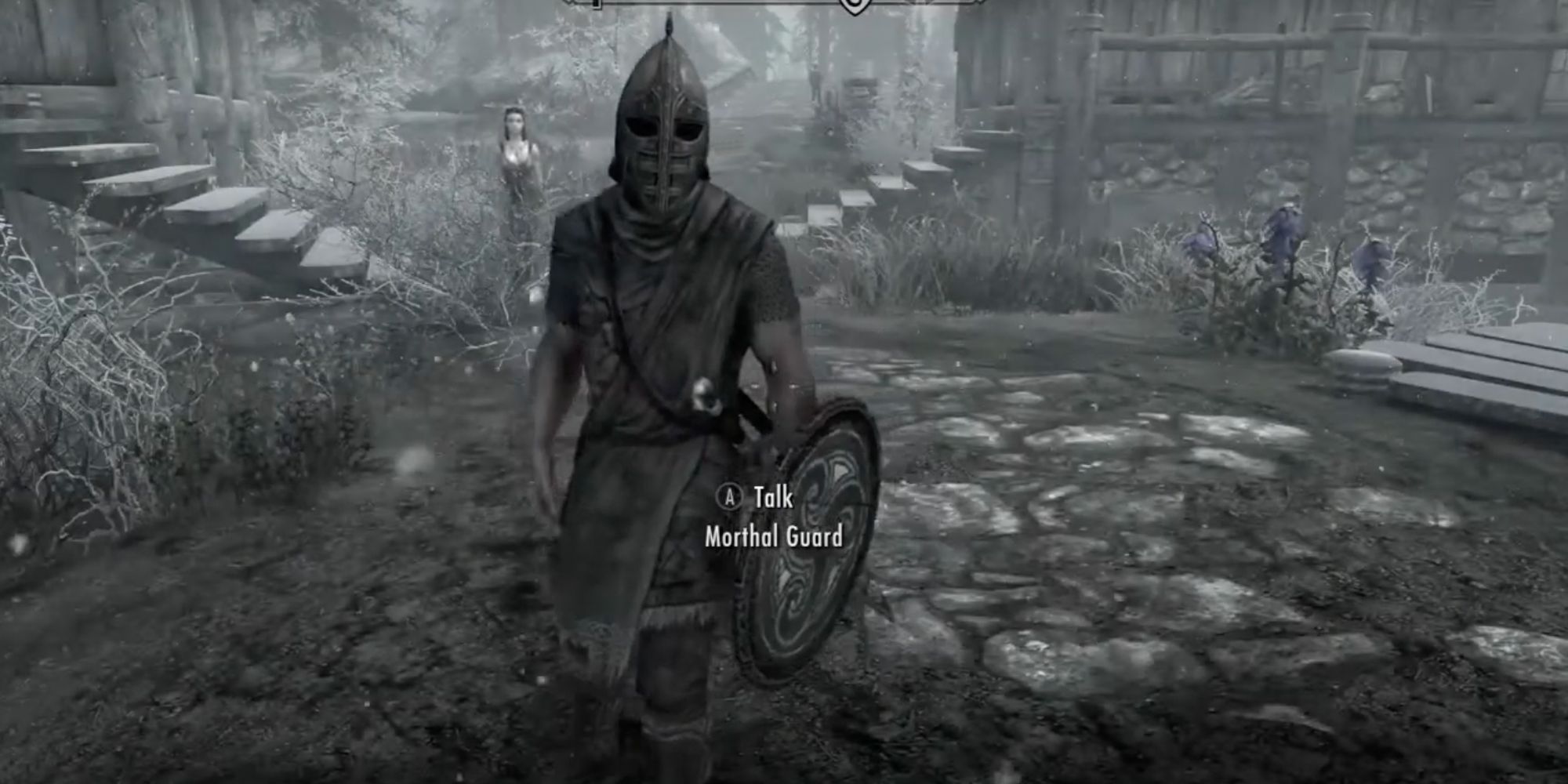 In a ranked list, there must always be something at the bottom, and unfortunately for the Guards of Hjaalmarch and Morthal, their uniforms start off this list. While their color combination of the sage green sash and quilted beige armor is not particularly offensive, it comes off as a bit drab when compared to the more stark contrasting colors of other holds.

Same thing with their shield. The Celtic-esque shape is compositionally interesting, however, the black and dark green wash each other out. White is used sparingly and could be incorporated more heavily for a more graphic, eye-catching look. They do, however, get some extra points for consistency. While Morthal does have its own rustic beauty, it's usually regarded as one of the more abysmal and derelict locations in Skyrim. 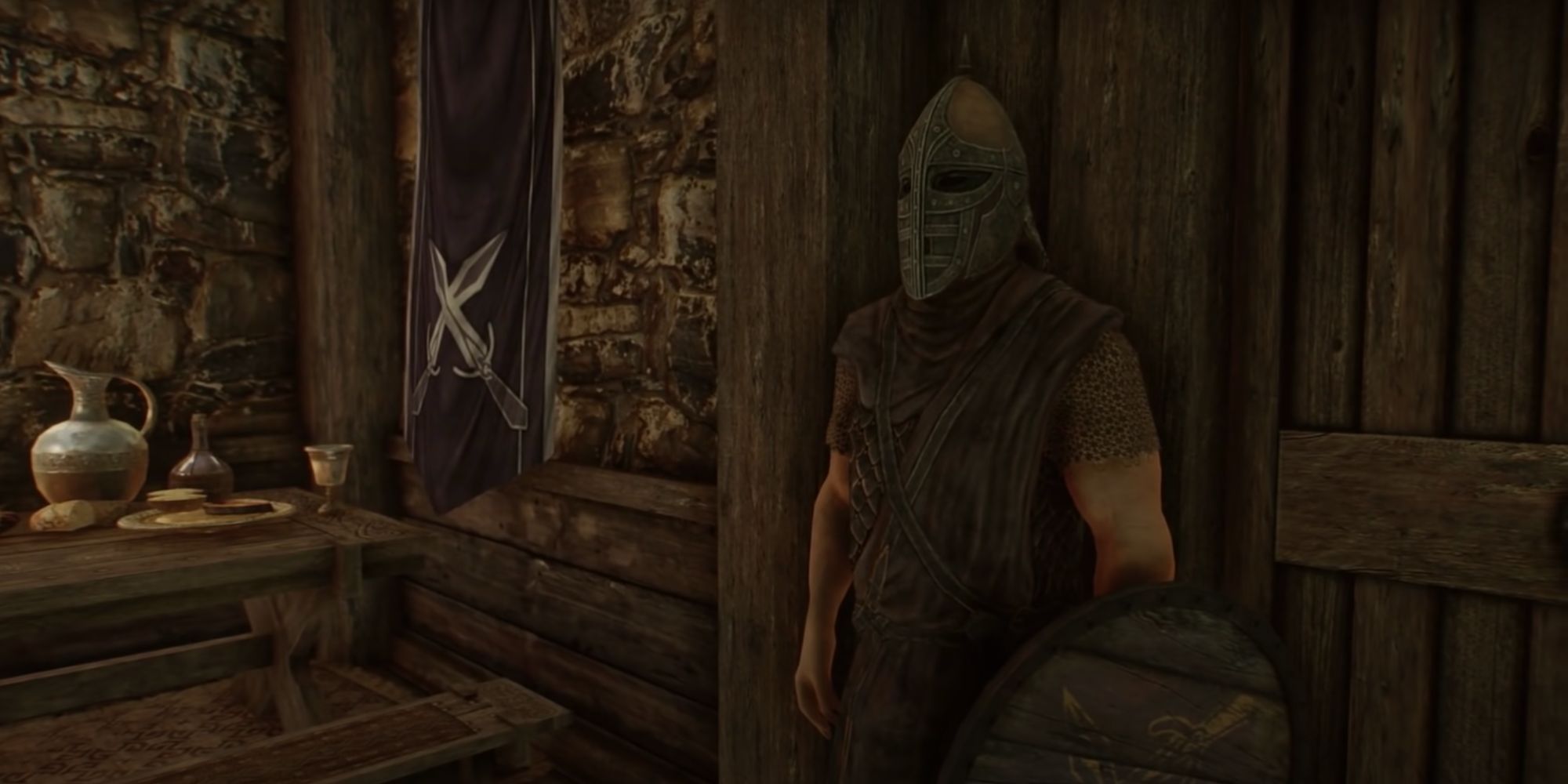 While Riften is one of the cooler cities for players to explore, and the house of the ever-lovable thieves guild, their uniforms aren't the most fashion-forward of the bunch. While the dark purple sash and dark brown-grey armor are pleasant colors, together they are fairly dark, and can sometimes mesh together.

While the purple is unique, the shield emblem is one of the more compositionally lacking designs, and the yellow can be a little hard to see. Extra points go to Riften for their darker colors matching the brooding atmosphere of their city. 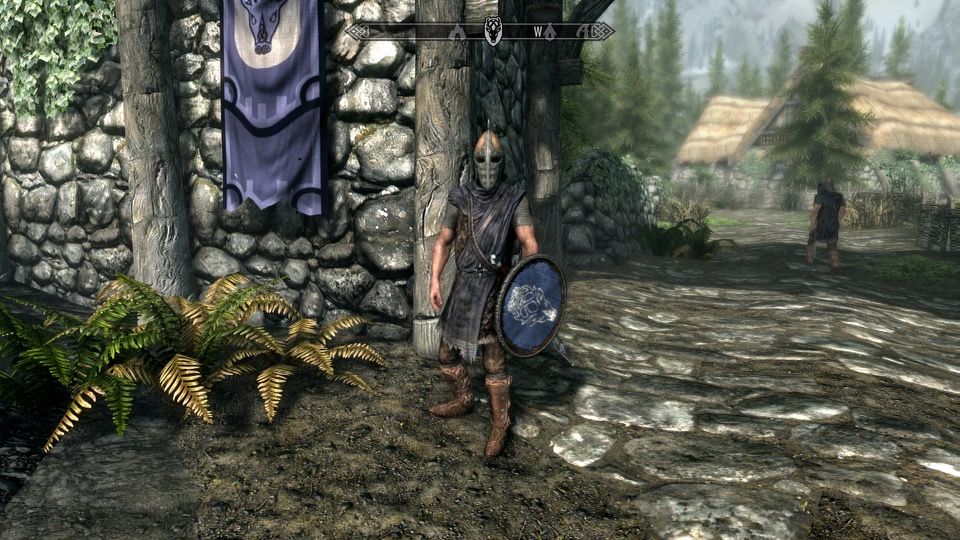 The Falkreath armor is a difficult situation. If this list was based solely on shield emblem, then Falkreath gets the number one spot, no questions asked. The colors are great, a more muted dark blue which allows the pure white of the deer to shine. The pièce de résistance, if you will, is the antlers of the stag. Interlaced in an intricate, symmetrical pattern, it is eye-catching and overall just good old-fashioned cool.

The armor, on the other hand, is a different story. The grey-blue of the sash often reads as just muddied grey, or even a not bold black, and that armor doesn't do much to help. 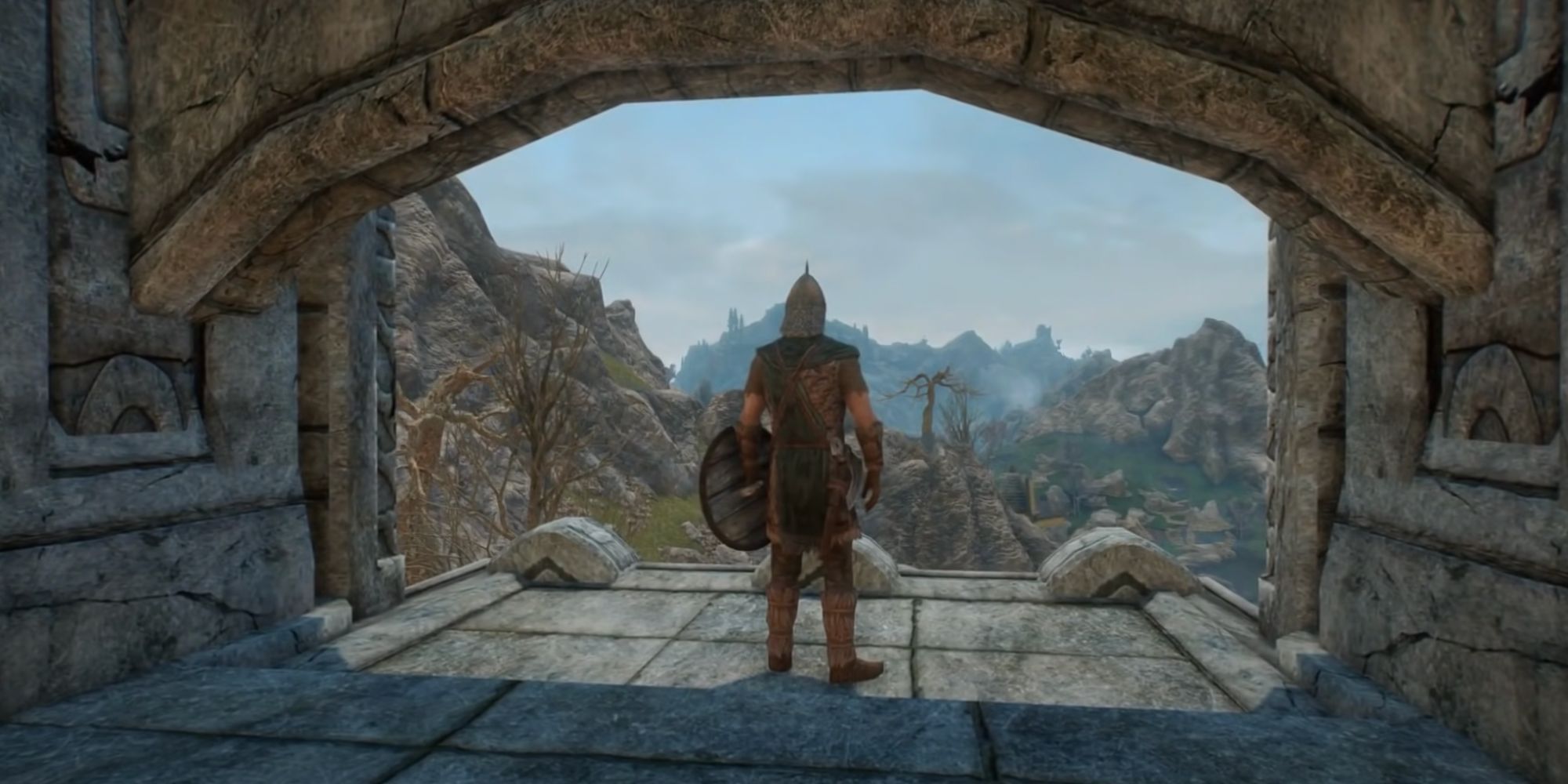 This is the part on the list where things start becoming all-around positive. The sash of Markarth is a really nice dark green, and gives a natural feel. The padded armor under is a little dull, but allows the green to stand out.

The shield design is one of the stronger ones. The rams head is a bold icon, and the tangled skull evokes the Celtic and Norse imagery that Skyrim's culture is heavily inspired by. The look is altogether very cohesive, and almost acts as camouflage in some greener parts of the map they patrol. 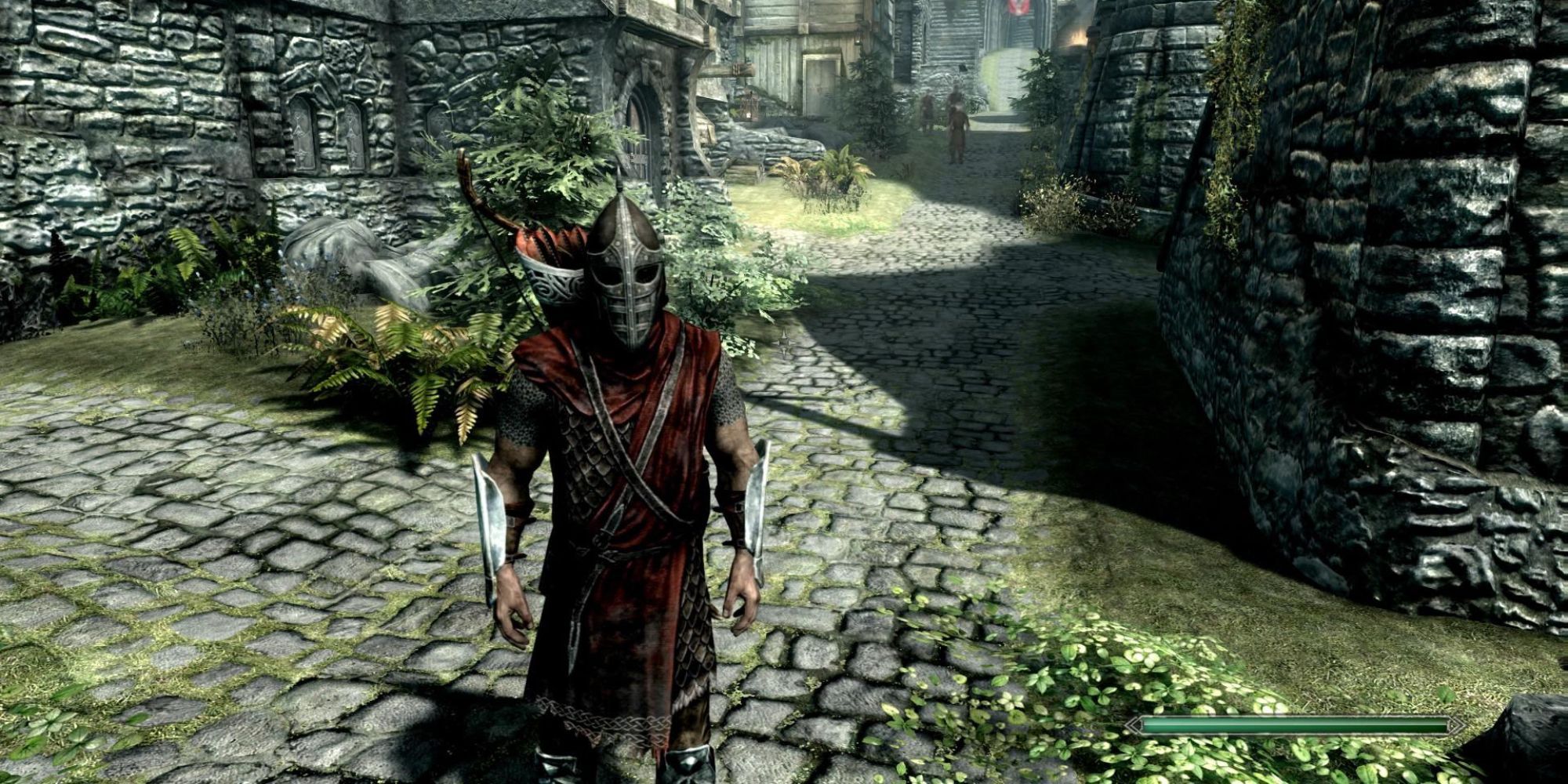 The Solitude guard armor is unique in that it's the only uniform (along with Whiterun) to have a warm color, and definitely the boldest. The red is eye-catching and is definitely lacks subtly. The flashy red goes with the actual armor as well, as it is made of metal and has a bit of shine to it. 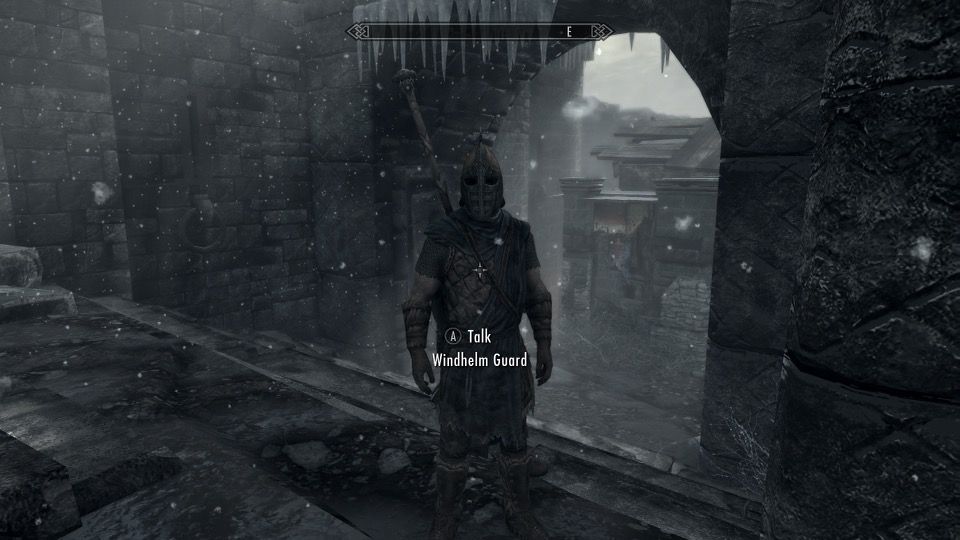 So, because of Ulfric Stormcloak and his rebellion, Windhelm is actually guarded by Stormcloak rebels, giving them a slightly different appearance. Overall the actual armor is the same preset as the others, but with a nice, bold blue sash.

The shield is pretty impressive as well, bearing the bear (ha!) of Jarl Ulfric and his family. The combination of the uniform and Ulfric's sigil leaves these guards looking a little intimidating for sure. Minus points for enforcing some of the shadier laws that exist in Windhelm. 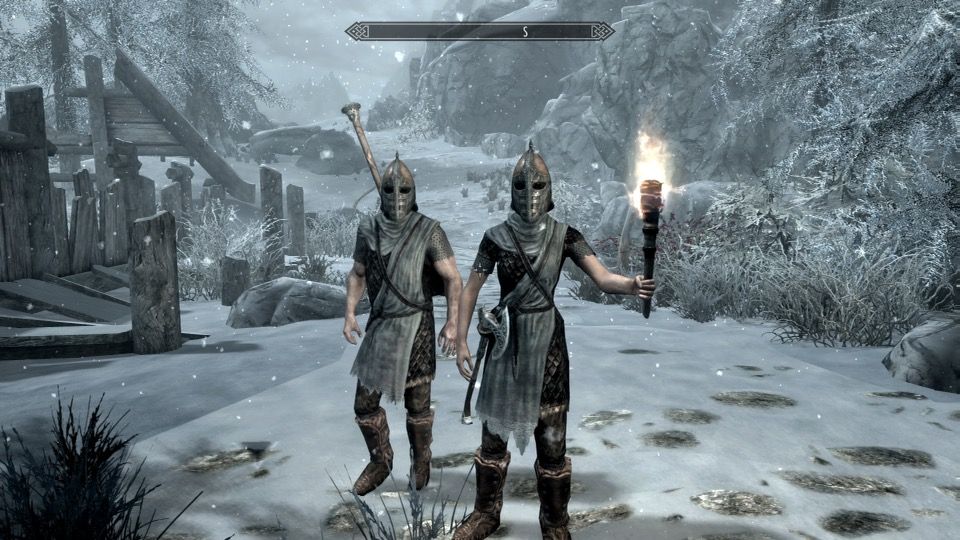 Winterhold's uniforms are true to their names. They evoke the cold and harsh season of winter. With the pale white and blue of the uniform, and the light blue and dark blue shield, Winterhold guards are here to tell you "yeah, it's cold up here."

Winterhold also gets some bad-boy-rebel points as for the most part, their guards don't actually carry shields, except for one. Perhaps it's because there's not much to fight that far north, or because the mages are there to help them, but they streamline their outfits by just carrying their weapons and nothing else. 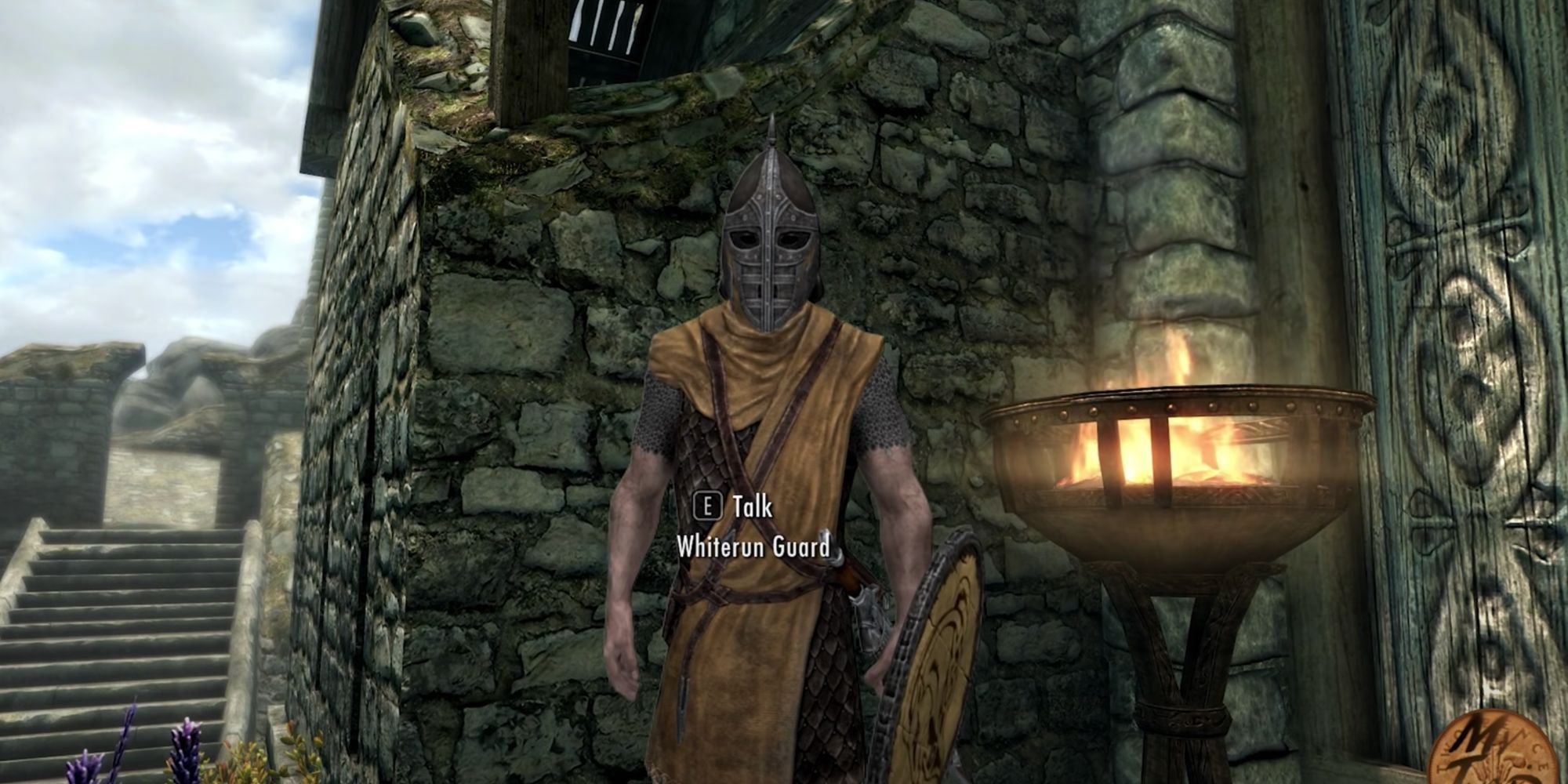 The runner-up on this list, Whiterun's uniforms have a lot going for them. Like Solitude, it has a rare warm color, which is nice to see. It also stands out due to its dark helmet. The shield itself is also one of the more voguish of the lot. Featuring a stern-looking goat, it truly gives off the message that you don't really wanna mess with one of these guards – or they might just fire an arrow at a certain part of your body.

Extra points to Whiterun for being so chic, as most players spend more time there early in the game (or even the whole game) than anywhere else. 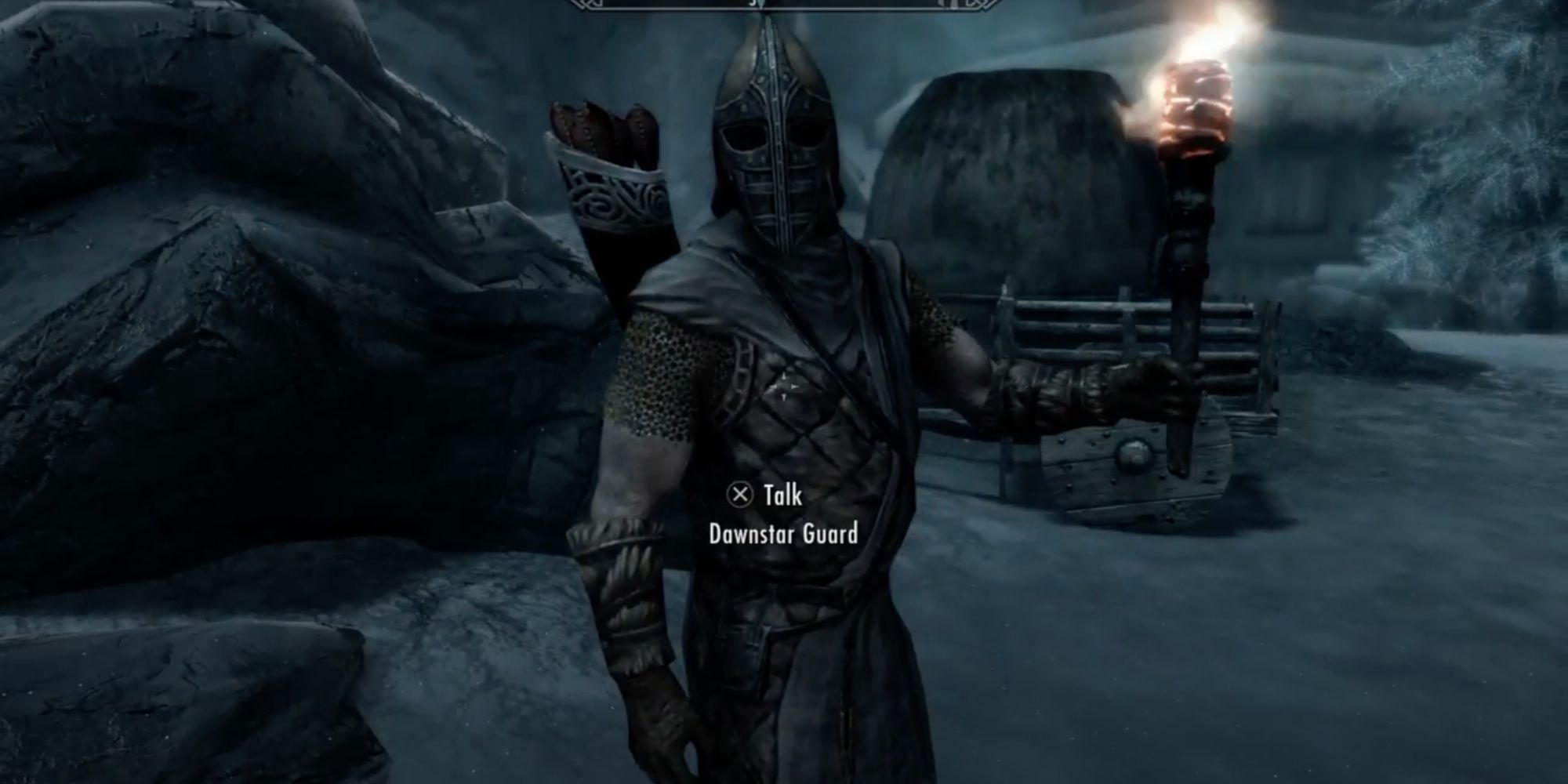 The Pale's uniform is the crème de la crème for one main reason: consistency. The lighter colors of beige and pale blue are refreshing, but instead of melting into each other, they pair quite nicely.

The shield matches perfectly too. The simple but pleasing design truly evokes the mission of those who live in Dawnstar, and overall it is just pleasing to look at. While all the uniforms are more or less pretty alright, the guards of The Pale definitely look the best when they clock in for work. Extra points to The Pale uniforms for actually being pale.