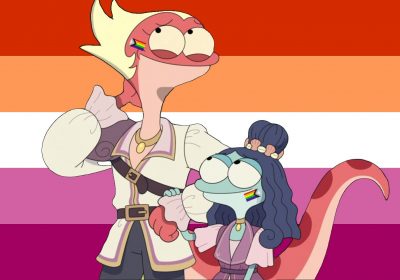 The Amphibia ending was everything I wanted it to be. Our heroes triumphed in their final battle, said farewell to their closest friends, and moved forward into an uncertain future. I cried like a big gay baby throughout the entire thing, cursing Matt Braly for putting me through this emotional rollercoaster while simultaneously being floored by how perfect the conclusion managed to be. It had so much ground to cover and knocked it out of the park.

I swear almost every single character – both main and supporting – received a worthwhile resolution to their respective arcs while keeping the door open for even more shenanigans if the opportunity ever arises. Sprig and Ivy embark on an uncertain journey to explore a new continent, Polly is now a big kid ready to cause trouble and become a symbol of hope across Wartwood, while Olivia and Yunan are finally smitten with one another after so much pining.

That’s who I want to talk about today, because as TheGamer’s Queen of Gay Cartoons I have a professional duty to touch on a pairing I’ve been rooting for ever since they first appeared. Premiering in the second season as Anne Boonchuy first journeyed to Newtopia in order to reunite with childhood friend Marcy Wu, Lady Olivia and General Yunan have a dynamic that is so desperate for a romantic connection that we were on board within minutes. One is short, one is tall. One is sour, one is sweet. You get the idea.

Olivia is a petite and courteous lady eager to serve the crown and strive for a better world, while Yunan is a chaotic, often angry knight prone to violence and doing everything she can to defend those she loves. Olivia is constantly doting on Yunan and making adorable comments about her outbursts, while they can often be seen in each other’s company throughout later episodes after King Andreas turns heel and forces the two under his corrupt command. Even under mind control, the bond between them is clear.

I love pairings like this, even those who don’t end up being made canon in the grand scheme of things and instead retain subtext for us to project ourselves onto. But for Olivia and Yunan, the future was bright, and I had to keep it a secret for far too long. I’m a chaotic pansexual – do you know how hard is it to avoid a teasing tweet when I’m told that a couple I’m rooting for in a show will inevitably get together? It’s very hard! 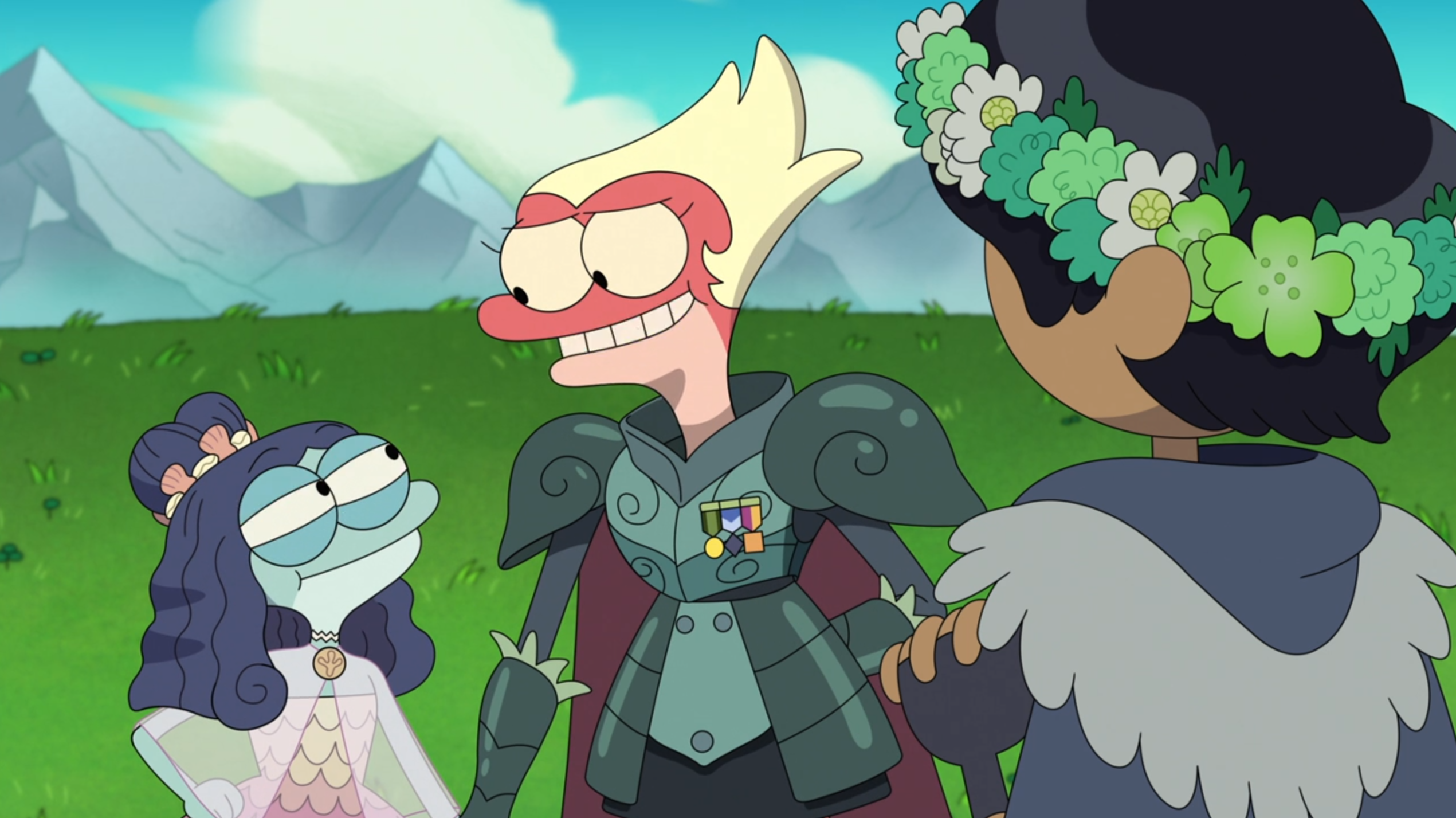 For some context, in my recent interview with show creator Matt Braly about Amphibia coming to an end we talked about shipping:

“I love shipping, I feel like it is the greatest expression of love for characters,” Braly said. “You’re really thinking about them romantically and what’s best for them. We have canon couples that get together in the show but specifically, with our three leads, we have worked very hard to keep things very open and never commit because the last thing I would ever want to do is ruin somebody else's headcanon or ship for no reason. That’s destructive for me because oh my gosh all the fighting and the arguments. “So for me, especially in this story that is ultimately about friendship, and their friendship dynamic is to end the show in a way that is constructive and open. That’s basically what I’ll say to that is how we’ve worked very hard to have empathy for the people who are shipping these characters and at the same time do right by the show and its themes. So, knock on wood!” 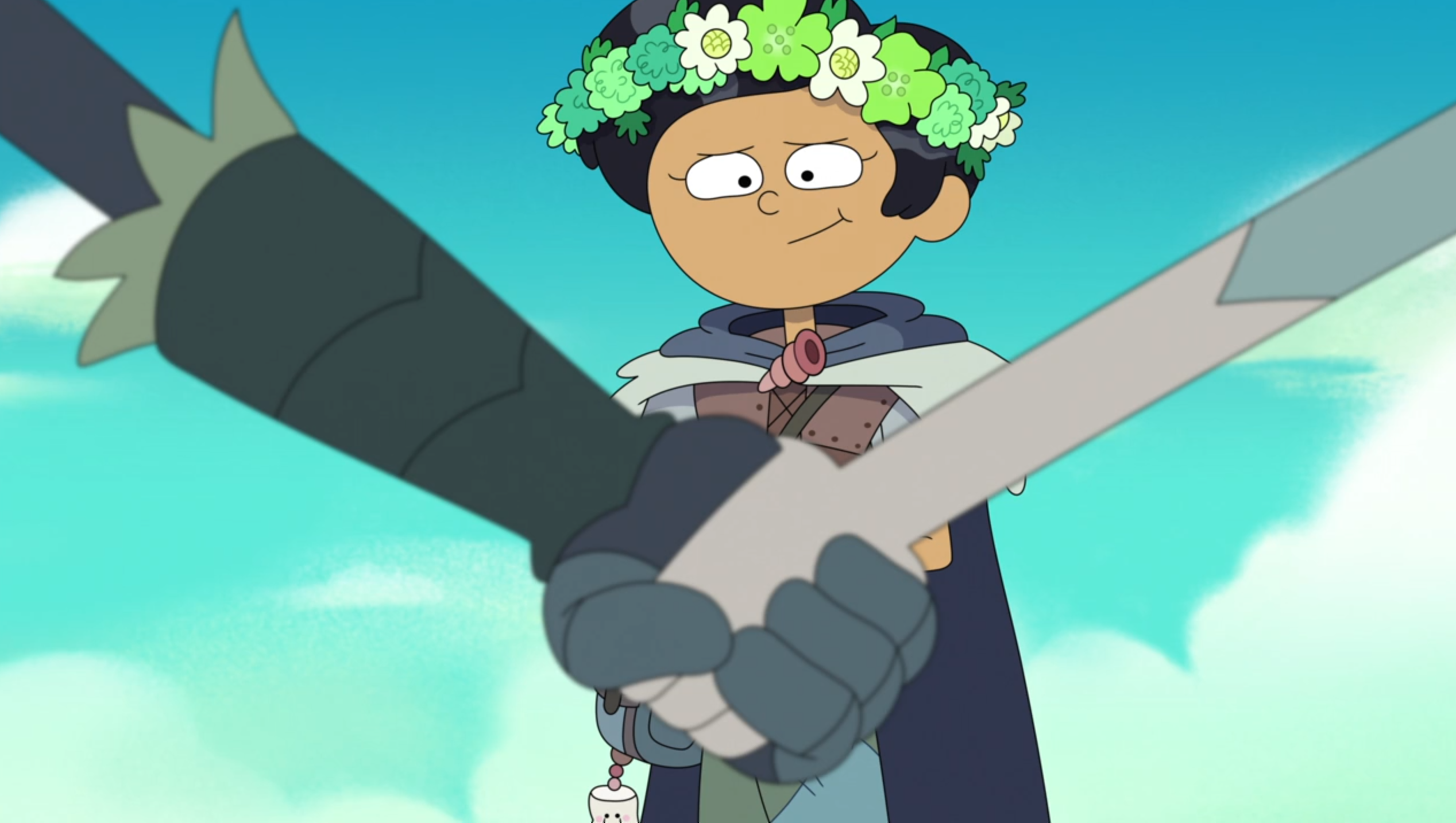 After this discussion I teased that even if the three heroines weren’t destined to fumble into romance – except for Sasha Waybright’s confirmed bisexuality – I would love to see Olivia and Yunan made official. I’m not saying I willed it into existence, but I almost definitely helped. I’m serious, it was all me.

“I feel like I can just tell you that’s happening,” Braly told me ahead of the finale. “It’s happening, and it’s awesome. It’s very organic and like our favourite ship. If you want to wink about it you can, because it’s about to happen too and [fans] won’t have to wait long.”

Representation is best when it feels natural and earned, and the love being expressed feels believably worthwhile when presented alongside the main narrative. Olivia and Yunan fit this definition so beautifully, with their confession being both subtle and clear in its delivery. We catch glimpses of intimacy between them in ‘The Beginning of the End’ and ‘All In’ with the duo seen holding hands or grasping one another in moments of battle, showing an unspoken care for their combined wellbeing in myriad moments that could easily be their last.

When they emerge unscathed, feelings that have been bubbling away all along finally rise to the surface. Upon saying farewell to Marcy they exchange loving glances, hands clasped tight as they thank their departing friend for making it all possible. Our brief snapshot of them in the future only shows this romance growing fonder. Olivia’s arm wraps around her partner as she talks about wanting to settle down one day, perhaps even having children while fondly looking back at all the adventures they’ve had together.

Only small slivers of this love are shown across Amphibia’s moments, but its confirmation adds a deeper context to all past interactions. We can go back and watch older episodes knowing what’s to come in the future, or adding additional details to subtext that has now become concrete. I love them so much. These newts gay. Good for them.