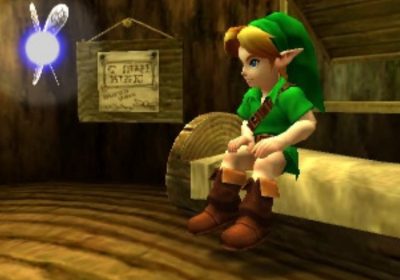 Early builds hold a lot of information about the initial design of a game, which often differs from the developer’s final project. One example of this is a stripped-back version of The Legend of Zelda: Ocarina of Time, which offers a glimpse at a specific mechanic that never made the final cut.

Shared by Forest of Illusion on Twitter, an early build of Ocarina of Time was once found on an old Nintendo 64 development cartridge featured during Space World ‘97 – an annual Nintendo event. The cartridge was used to house F-Zero X, however a development build of Ocarina of Time was also found – despite part of the demo being saved over. Progress on Kakariko Village and a rudimentary archery test whilst riding Epona could be seen. However, it was also revealed that at one point Link could transform into Navi.

This particular feature was highlighted further by users “MrCheeze_” and “zeru64”, who both shared images featuring the effect of the lost Magic Spells as well as Link’s ability to morph into Navi using the Soul Medallion. These images explain how Link would have been able to navigate the map as Navi whilst wielding his Master Sword and Hylian Shield. Other medallions would have allowed Link to use fire to his advantage and warp out of conflict. It’s an interesting mechanic that was once included, having Navi serve as an ally in dangerous situations, as well as some interesting abilities from medallions.

The demo also disclosed a very different-looking Hyrule featured in the 1997 “World Atlas”, as well as the prototype for Link’s Hover Boots – which were once called “Pegasus Boots”. Some of the translated text shared by MrCheeze suggested that Ocarina of Time’s narrative progressed differently to the one we know and love. Initially, the Deku Tree was going to be a prison for fairies and this would have been a mission for Link to overcome in order to free Navi.

Ocarina of Time is a beloved and critically-acclaimed game from Nintendo, and stands as one of the best games of all time. Its perfection, however, does not stop modders from creating their own version of the classic – which is what Kaze Emanuar did with the mod The Legend of Zelda: The Missing Link.