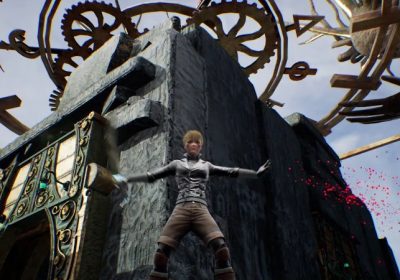 Not many details were announced about the game, but the trailer showed a lot. Set in the same world as 2016’s Let It Die, the trailer begins with someone who appears to be the host of the Deathverse competition, which is something aired on in-universe television.

Deathverse seems to feature multiple characters, each with unique abilities and weapons that will be used to take down opposing players and NPC enemies. There’s also weapon customization, which allows players to try a weapon, customize it after a battle, and return to the arena to try it out once more.

In terms of abilities, we see some players using a Tommy gun-like weapon to call bullets down from above, and we also see some damage-defying shields and bubbles. Some enemies use swords fit for a samurai, while others use weapons that look more at home in a Saw movie.

“Players take the stage in the world’s most popular survival reality TV show, set hundreds of years after the events of Let It Die,” a press release about it reads. “Armed with a robotic combat tool equipped with many deadly features, each player can use a variety of weapons, protective shields, and skills to create a character who can outlive the competition. They’ll also have to fend off monsters and assassins to stay alive in this gloriously gory arena.”

Throughout the entire trailer, we see a regal-looking character dancing to some poppy music. Perhaps she’s involved with the actual live-air competition, or maybe she’s one of the fighters that can be used in-game.

If one thing is clear, it’s that the number one goal of anyone in the arena is to survive. It doesn’t appear to be a battle royale, but rather something more akin to an arena-based melee deathmatch.

Will you be checking out Deathverse: Let It Die when it hits PlayStation consoles next Spring? Let us know in the comments below!