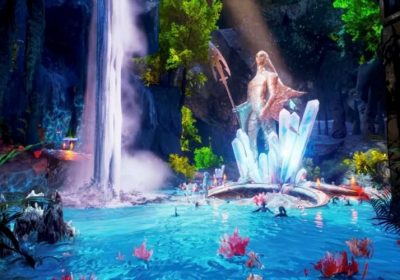 The Nintendo 64's The Legend of Zelda: Ocarina of Time regularly features in lists of the best video games ever made, and it has a firm place in the memories of many who played it. However the game is nearly 24 years old and as such could probably do with a little shine and polish. While there was the 3DS version which did scrub up the game's visuals we haven't had anything more modern since then.

However, fans have taken on the projects themselves. There's already a fan remake of Ocarina of Time in UE4, but another has taken it upon himself to reimagine the title in Epic's latest version of its game engine. A 3D graphics artist has worked on remaking parts of Ocarina of Time in Unreal Engine 5, and the results are something to behold.

The great effort comes from RwanLink who has previously given us a "next-gen" version of Lake Hylia. His latest is a recreation of Zora's Doman, and we see Link as a young 'un and his older self. According to the maker, he toiled many hours to create it all.

"I have personally worked on this video for 1200 hours over the past four and a half months. (18 weeks) My deadline was to finish it before July because I'm moving and I didn't want to be in the middle of a project. I hope you'll enjoy the tremendous amount of work that went into making this video in such a short time. The composer also made 8 different tracks for this video!" the video's description reads.

The environments look pretty stunning, with the waterfalls and underwater shots looking particularly fine. It's good to see that we are still getting an artistic intepretation, rather than something too realistic and gritty, that pays homage to the original.

While the video shows off mostly cinematics, there is gameplay too, as we see Link paragliding, running around, and jumping. But there's no combat, which presumably is a much more complex endeavour for a solo dev.

While Nintendo isn't known for remaking many of its classic titles – although it did remaster N64 and GameCube Zeldas and remade Link's Awakening for the Switch – perhaps these fan-made efforts could inspire the Kyoto company to do more, especially as younger players may be unaware of the greatness of Ocarina of Time.