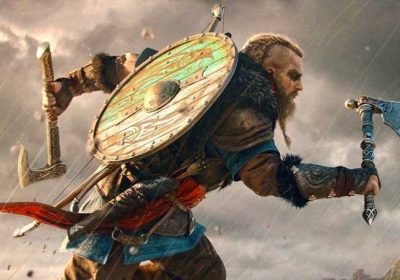 Today, Assassin’s Creed Valhalla, an action RPG developed and published by Ubisoft that was released November 10, 2020, has been marked down to $30 on all consoles, including PS4, PS5, Xbox One and Xbox Series X|S, until midnight.

The discount is currently available on the following websites:

The twelfth major installment and the twenty-second release in the Assassin’s Creed series, and a successor to the 2018’s Assassin’s Creed Odyssey, Valhalla is set in 872 AD during the Viking invasion of Britain. Players take control of Eivor, a Viking raider caught up in the conflict between the Brotherhood of Assassins and the Templar Order.

Eivor can be played as either male (voiced by Magnus Bruun), female (voiced by Cecilie Stenspil), or the game can alternate between the two at key points in the story. Players can also customize the character’s hair, warpaint, clothing, armor, and tattoos, as well as choose from a variety of weapons, including the newly added flails and greatswords.

Director Ashraf Ismail has said that Michael Crichton’s 1976 novel Eaters of the Dead influenced Valhalla’s setting, while writer Darby McDevitt admitted the game resembled the God of War series, though added that Valhalla was a more “historically grounded” experience.

Valhalla received positive reviews from critics, who praised the narrative, characters, graphics, world-design, and interconnected activities. In its review of the game, TheGamer wrote, “The narrative itself is immensely satisfying, to the point I’d say it’s the most cohesive, fascinating, and inventive story the series has ever seen — by a long shot.”