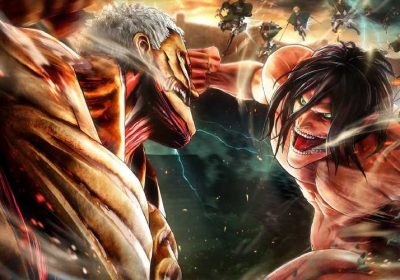 One fan is bringing Attack on Titan to Oculus VIA SideQuest, putting you into the shoes – or rather gliders – of The Garrison. You can swing through the air with your two swords, lopping off the heads of these muscle-bound goliaths. Just make sure you keep a bucket by your feet, eh?

In a video shared on TikTok, developer swammyxo shows the game's tutorial where they leap from the wall into the city to take on a training dummy, slicing off their head mid-air. It then cuts to them gliding right into the face of a colossal which is a bit of a step up from a cardboard cutout. If you've ever swung around New York City in the Spider-Man tech demo, then you'll know how nauseating and disorienting heights in VR can be, so imagine swinging about while fending off living nightmares that are trying to eat you.

There's already a PC and mobile version of the game that you can pick up, but the VR version is a little ways off – it's coming sometime in 2022 at no charge. It's not official or licensed but rather a fan-made indie game that aims to bring Attack on Titans fans a little closer to the action, experiencing it like never before. But if you wanna give it a whirl on PSVR then you're out of luck. As Swammy stresses, "Fan games cannot come to consoles." Regardless, you can catch a glimpse at the gameplay below.

It's not the only Attack on Titan VR game out there, either. There's another called Attack on Quest which is available right now. What's more, it even features multiplayer if you fancy taking on a few colossals with your mates.

Attack on Quest is both fan-made and free-to-play just like Swammy's, but you can name your price on itch.io when you're picking it up if you want to donate to the developer. It's at least worth a look if you've dreamed of swinging through the streets of Shiganshina, defending the walls like Eren and his Garrison pals. And it's worth getting into now especially as the developer is still supporting the game – only recently, an update added a forest level, female boss titan, new stunts, a ranking system, and more general improvements.

Attack on Titan is the perfect setting to push VR to its limits, so it's no surprise that two dedicated fans have done just that – maybe the publisher, Kodansha, will realise that potential itself and get its own, official version out there one day.