Home » News » Bayonetta 3 Voice Actor Raises Over $5,000 For Trans Lifeline In One Night

Bayonetta 3 Voice Actor Raises Over $5,000 For Trans Lifeline In One Night 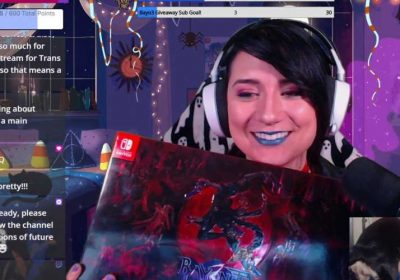 Anna Brisbin, a voice actor who plays Viola in Bayonetta 3, has just raised $5,170 for the charity Trans Lifeline. This comes after a single session of playing the new Bayonetta game on stream, with Brisbin set to go live again later today.

This also comes less than 24 hours since Brisbin revealed that she's in the game, with Bayonetta 3's launch meaning she can discuss her involvement. The fundraiser is still live on her Twitch page, so there's still time to donate to Trans Lifeline if you missed yesterday's stream.

In Bayonetta 3, Brisbin plays Viola, a newcomer to the series. Viola is a new Umbra Witch from an alternate reality, and is a major character in the third game's story. She's also playable in the game, and has a unique moveset to Bayonetta.

As well as this playthrough stream, Brisbin shared a video to her Instagram which she recorded back in 2021. Having just come out of a recording session for Bayonetta 3, she described Viola as her most "important" role yet, and was clearly eager to reveal that she's in the game.

The charity Brisbin chose to highlight during her Bayonetta reveal, Trans Lifeline, operates a helpline for the trans community, run by fellow trans people. It described itself as offering "emotional and financial support to trans people in crisis", and aims to provide them with the resources they need to thrive.

This comes as much more uplifting news than what we saw yesterday, with former Bayonetta voice actor Hellena Taylor instead using the game's launch to promote anti-abortion charities. Four of the 14 charities Taylor encouraged Bayonetta fans to donate to held pro-forced birth views, with one of them even dedicated to sharing abortion misinformation on billboards across Kentucky. Taylor is yet to respond to the criticism she faced for promoting these charities.