Bean Stalker Now 35% Off In Biggest Discount Of The Year 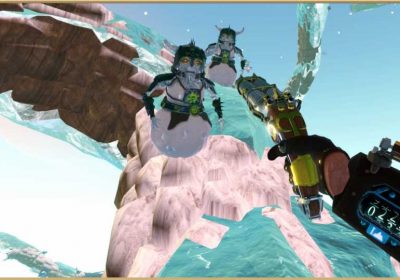 Bean Stalker, the steam VR game where you ascend a giant procedurally generated beanstalk whilst defeating various baddies, is now on its biggest sale of the year.

The game is 35% off running from until December 20th.

To coincide with this, VR Storm Studio just released a brand-new stalk to climb; the Frozen Wasteland. This level is a free addition for all existing players and should add to explore for experienced players, as VR Storm estimates each stalk takes approximately 6-8 hours to complete depending on skill level. The developers say that his new arctic level; the third stalk in the game, brings a raft of new features from “additional weapons and enemies to fresh puzzles, a new boss, a unique temperature system, and a completely new environment”.

The arctic scenery brings along with it a new challenge — a new “lighter” system that forces you to adapt to the environment and keep yourself warm from the blistering cold, a fresh way of challenging even the most experienced stalk climbers. If you don’t have a source of heat with you, you will take physical damage from the intense cold so make sure you plan ahead. If you can’t find a torch or a lighter to keep you warm, you will have to find other ways to adapt including making warm cups of tea or finding heat producing plants. Simply put, maintaining body temperature will be key in the Frozen Wasteland.

Of course, the creatures inhabiting the Frozen Wasteland are fully adapted to the surroundings so you will have some tricky enemies along the way trying to make things even more difficult for your ascent. These creatures can be small and swarm around your feet or they can be huge and are more direct and aggressive with their big gnarly teeth in large packs. Fear not though, there’s plenty of new weaponry to fend off these terrifying new enemies and there are even more that you shall discover as you ascend the Frozen Wasteland!

Bean Stalker is on sale until 19th December starting now! This will be the biggest sale of the game this year with a massive 35% saving and is available on Steam VR including compatibility with the Oculus (meta) quest via air link.

You can purchase Bean Stalker on Steam. If you want to see more, you can check out VR Storm, you can check them out on Twitter, Instagram, Facebook, Twitch, Reddit, or Discord. This is partner content that has been produced in conjunction with VR Storm.

This is partner content that has been produced in conjunction with VR Storm.