Become Lord Of The Rings’ Sauron With This Elden Ring Mod 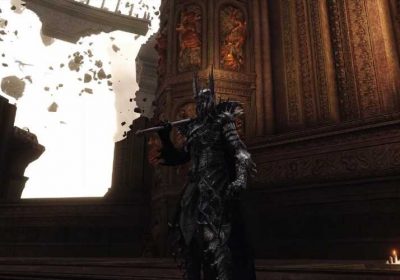 Elden Ring modders have filled The Lands Between with all sorts of weird, wonderful, and sometimes just helpful mods in the seven months since the game launched. Now their work has brought Sauron to the game, just in time for those of you gripped by Amazon's Lord of the Rings show, The Rings of Power.

The mod, which was created by MaxTheMiracle (via Eurogamer), is for Elden Ring armor, so covers your character in the dark outer shell fans of the LOTR trilogy will be familiar with. The only glaring difference between OG Sauron and the Elden Ring version is his height, which is a hard hurdle to get past for this particular project.

The mod is also just armor for now and actually uses a move set from another mod made by the Garden of Eyes team. As you can see in the clip below though, it works pretty well. It's likely the Sauron mod has been pushed out a little early so Elden Ring players can make the most of it while JRR Tolkien's villain is very much in the spotlight.

The Elden Ring Sauron armor is available now through the Garden of Eyes mod with the promise it will be worked on and improved in the near future. The height will likely be something that can't be tweaked, but Garden of Eyes does have a video that turns Sauron into an Elden Ring boss where he is much larger and more in keeping with his intimidating canonical size.

Sauron joins a lot of other characters who have already been modded into The Lands Between. Darth Vader, complete with his iconic red lightsaber, has been there for a while. Sauron might be the first genuine contender for Vader's villainous crown, although Malenia probably has them both beat. Mario and Luigi, who have also been modded into the game, have quite the task ahead of them. Suffice to say those three villains mentioned above are tougher foes than Bowser.