Best USB microphones for streaming in 2021 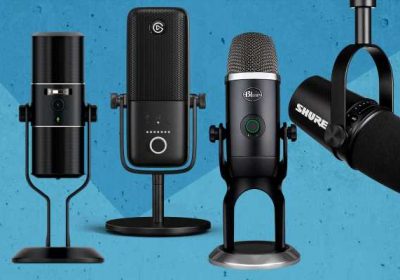 Whether you’re streaming games to Twitch, YouTube, or another streaming platform, your audience needs to hear you clearly over the gameplay. (The same holds true if you’re holding live chat sessions or talking with your viewers as you work on a project.) And unfortunately, microphones built into laptops, webcams, and even headsets just don’t sound as good compared to a full-size microphone sitting close to your mouth.

The good news is, you don’t have to spend a lot of money to upgrade—while professional streamers use pro-level audio equipment for the best possible sound, USB microphones are much cheaper. They’re much easier to use without sacrificing quality, too. Plug a USB microphone into your computer, and you can be off and running immediately.

Our picks for the best USB microphones focus on these core basics: They’re easy-to-use models that offer great quality for a fair price, as well as work with a variety of voice types and volumes.

Want more details on how to pick the best microphone for your voice? We explain the key features and what to look for in a USB microphone below. 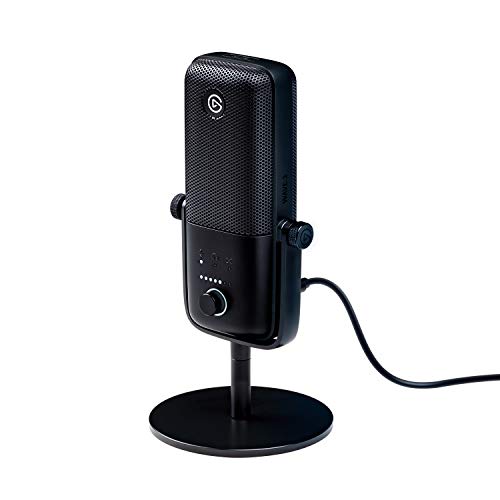 The Elgato Wave:3 packs in a lot of performance for a $160 USB microphone. Not only does it sound great out of the box, but it can be tuned further, too. You can also easily adjust the mic during streams, thanks to a capacitive mute button and a physical dial that controls mic gain, headphone volume, and crossfade (aka the balance of your mic versus PC volume when using connected headphones).

Powering the excellent audio is a 24-bit/96kHz analog-to-digital converter and a large condenser capsule sensitive to voices of all volumes, plus a lone cardioid polar pattern that keeps the focus on you and not background noises. Overall, voices sound natural coming through the Wave:3, and transitions from loud to quiet speaking are smooth. Our one nitpick is that this mic would sound even better with a little more sharpness in the mid-tones.

The Wave:3 also comes with built-in hardware to reduce unwanted vocal pops (those distracting bursts of air that happen when saying words that start with letters like “p” or “b”), as well as a unique feature that reduces clipping (the distortion that happens when you talk or yell louder than the mic can handle) by switching to a secondary signal that’s been picking up your voice at a lower volume.

Streamers with a two-PC streaming setup or the use of additional non-Elgato mics may need to look elsewhere, but for most people, the Wave:3 is the closest to a one-size-fits-all solution—especially since Elgato’s Wavelink software gives you control over audio routing of other sources beyond your mic, too. 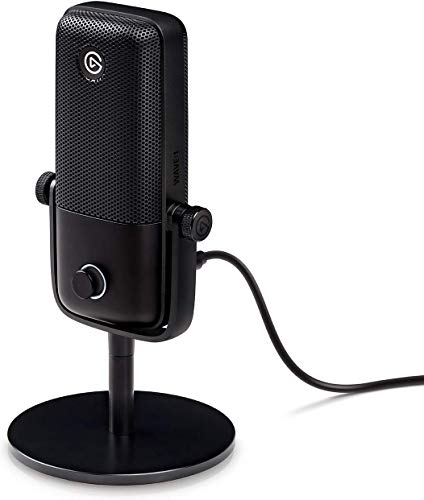 The Elgato Wave:1 may lack its sibling’s fancier features, but don’t count it out. It still has the same fantastic large condenser capsule and protection against plosives and clipping as the Wave:3, and you get similar sensitivity and tonal clarity, too. This mic plays nice with almost every voice out there—it provides warm, full tones in the low end that mix perfectly with a crisp high range.

Where it falls behind the Wave:3 is with its lower-quality analog-to-digital converter, which offers a 24-bit/48kHz signal. Less data in the digital capture of your voice means a less faithful reproduction of it, though as noted above, it still sound pretty good.

More disappointing are the stripped-down hardware controls. The control dial on the Wave:1 only toggles muting of the mic and headphone volume. You can still control mic gain and crossfade through Elgato’s Wavelink PC software, but the experience is more cumbersome than having dedicated controls on the mic. We think it worth the extra $30 to get a Wave:3, but if you’re on a tight budget, this $130 mic is still one of the best on the market. 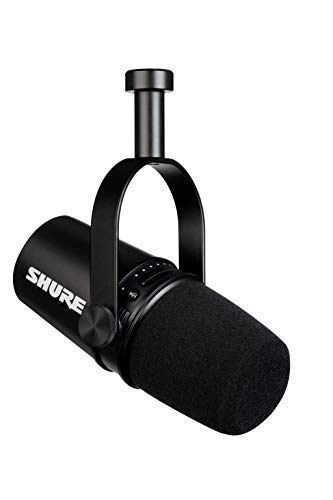 Last fall, Shure released the MV7, a USB microphone inspired by the well-known audio company’s legendary SM7B—a professional microphone used for decades by vocalists and countless radio shows. But while still aimed at a more experienced user, the MV7 requires far less time to learn its ins and outs for the best possible experience.

And what an experience it is. This dynamic-capsule mic sounds fantastic in the lower range (think booming radio voice), with smooth, clearly defined reproduction of tones in the mid and high range, too. To get the best results, you’ll need to tweak the EQ settings using Shure’s easy-to-use MOTIV software, but you largely get similar performance to the unparalleled SM7B. Furthering the MV7’s professional vibe is its solid build quality, though its heavier weight and lack of included stand means you’ll need a strong boom arm to use it effectively. The MV7 is also compatible with XLR connections, so if you upgrade to a more high-end audio system in the future, you can do so without having to buy another mic.

The MV7 isn’t for everyone, however. Its dynamic capsule is better suited for a loud voice, and it also has a highly directional hyper cardioid polar pattern, which limits how you can use it. (Its position relative to your mouth strongly affects performance.) This mic’s signal also caps out at 24-bit/48kHz. Most disappointing is the touch panel interface on the device for mic gain control, mute button, and monitor levels, which can be awkward to use during streams. But if you’ve got the patience and the right kind of voice, it’ll make you sound like liquid gold. 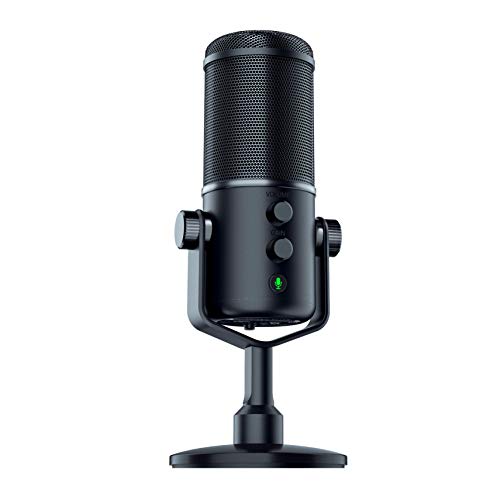 Razer’s top offering boasts specs that put it on par with the best mics in this round-up. Like Shure’s MV7, the Razer Seiren Elite sports a dynamic capsule that works well with many vocal types, emphasizes low-end tones, and requires close proximity for smooth output. (That last aspect is a positive when in a noisy environment, as it keeps background noises from being picked up.) And like Elgato’s Wave:3, the Seiren Elite has easy-to-use physical controls, with one knob controlling mic gain, another controlling headphone volume, and a mute switch. It even features an LED ring around the base of the mesh grill that lights up to indicate when mic’s built-in compressor kicks in to even out high spikes in volume.

But while this compact mic generally takes a radio-like approach to mic design and sound signature, its $200 price tag drags down its appeal compared to our top pick, the $160 Wave:3. That’s particularly so with its analog-to-digital converter limited to a 16-bit/48 kHz signal—the baseline of usable signal by today’s standards. Other mics with higher bit rates will have a longer life as future standards (and audience expectations) rise. You won’t be able to tune its output further, either, as Razer’s Synapse app doesn’t support that—a real bummer, since Seiren Elite lacks the clarity and sharpness of other mics in the mid-to-higher frequencies necessary for that classic radio sound.

Like Shure, Blue is a well-respected name in professional audio. But unlike Shure, Blue also has a history of producing great USB-based microphones for many use cases—and the company’s Yeti X comes closer to the Wave:3 in terms of audio performance than the rest.

Unlike the other mics on this list, though, the Yeti X doesn’t focus specifically on streamers. The company’s top microphone features multiple polar patterns (cardioid, omnidirectional, bidirectional, and stereo), which you can easily toggle through using the physical dial on the back. The condenser capsules in the Yeti X pick up voices easily and capture voice in all vocal ranges well, with an output at 24-bit/48kHz that has a neutral, more generic sound and works well for a variety of scenarios. That’s both a plus and a minus for this mic—with no features or distinct identity in its sound, it lacks a personality worth lavish praise. While you can tweak the audio profile in Blue’s Voice software quite a bit, the program can be buggy, making such adjustments unreliable.

Build quality is solid on this mic, which also comes with a heavy and sturdy included base. The main drawback of Yeti X’s design is how imposing it is in size—it takes up a lot of space within your field of view.

At $170, the Yeti X is the best Blue has to offer, but unless you’ll use your microphone for other purposes (in-person interviews, multi-singer recordings, etc.), you’ll be better off with a streaming-focused mic like the Wave:3. 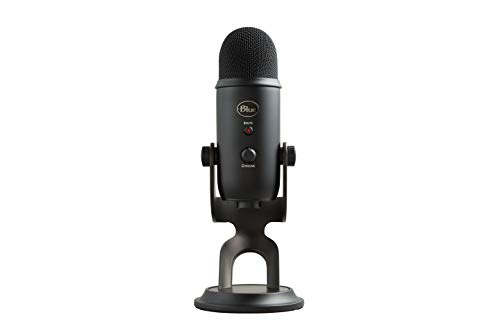 Similar to its newer, higher-end sibling, Blue’s original Yeti model is a solid, all-purpose USB microphone that offers good sensitivity to a variety of voice types and clear, neutral sounding output. It also has excellent physical controls on the mic, with separate dials for headphone volume, polar pattern (cardioid, omnidirectional, bidirectional, and stereo), and gain level, plus a mute button.

As you’d expect, this signal produced by this baseline Yeti is stepped down (16-bit/48kHz versus the X model’s 24-bit/48kHz), but audio reproduction still sounds good. Its primary downside is just how sensitive its condenser capsule is—even in cardioid mode, the mic picks up background noises easily, including the sound of pressing the mute button. The Yeti also still sports the mini-USB connection that it launched with back in 2009, though arguably, mini-USB is a sturdier port type than micro-USB.

The included base is sturdy and heavy, though this mic benefits from being put on a boom arm. (Remember, it picks up background noise easily, so it’ll capture the sound of your keyboard and how it rattles on the desk with unfortunate clarity.) Positioning it can be a bit of a hassle, though, due to how the Yeti’s large size can block your view.

At a list price of $130, the Yeti is best for budget-minded people who will also use it for other purposes like multi-singer recordings and in-person interviews. However, if you can find it for a sale price of $85 (which the Yeti often dropped to before the pandemic), we’d consider it a solid budget mic. 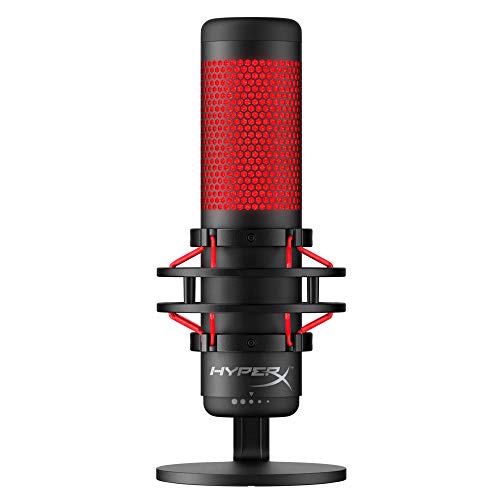 HyperX’s QuadCast has a distinctive look, but unfortunately, its appearance is the primary thing going for it. While the QuadCast’s flashy red coloring, tall rounded shape, and included shock mount show well onscreen, it doesn’t produce audio that sounds good. HyperX uses an electret condenser capsule, which are cheap and small—the opposite of what you want inside a $140 microphone. Its signal is capped at 16-bit/48kHz, too, which doesn’t do the QuadCast any favors given how light and flimsy it is. Its output sounds hollow and tinny, with a lack of warm, full lower tones. HyperX had a great idea with the built-in shock mount and the inclusion of physical controls on the mic, but the audio performance just isn’t up to snuff, especially at this price.

Page 2: We explain the most important features in a USB microphone, what to look for in a microphone to best suit your voice, and why USB microphones are so superior to mics in webcams, laptops, and even headsets.