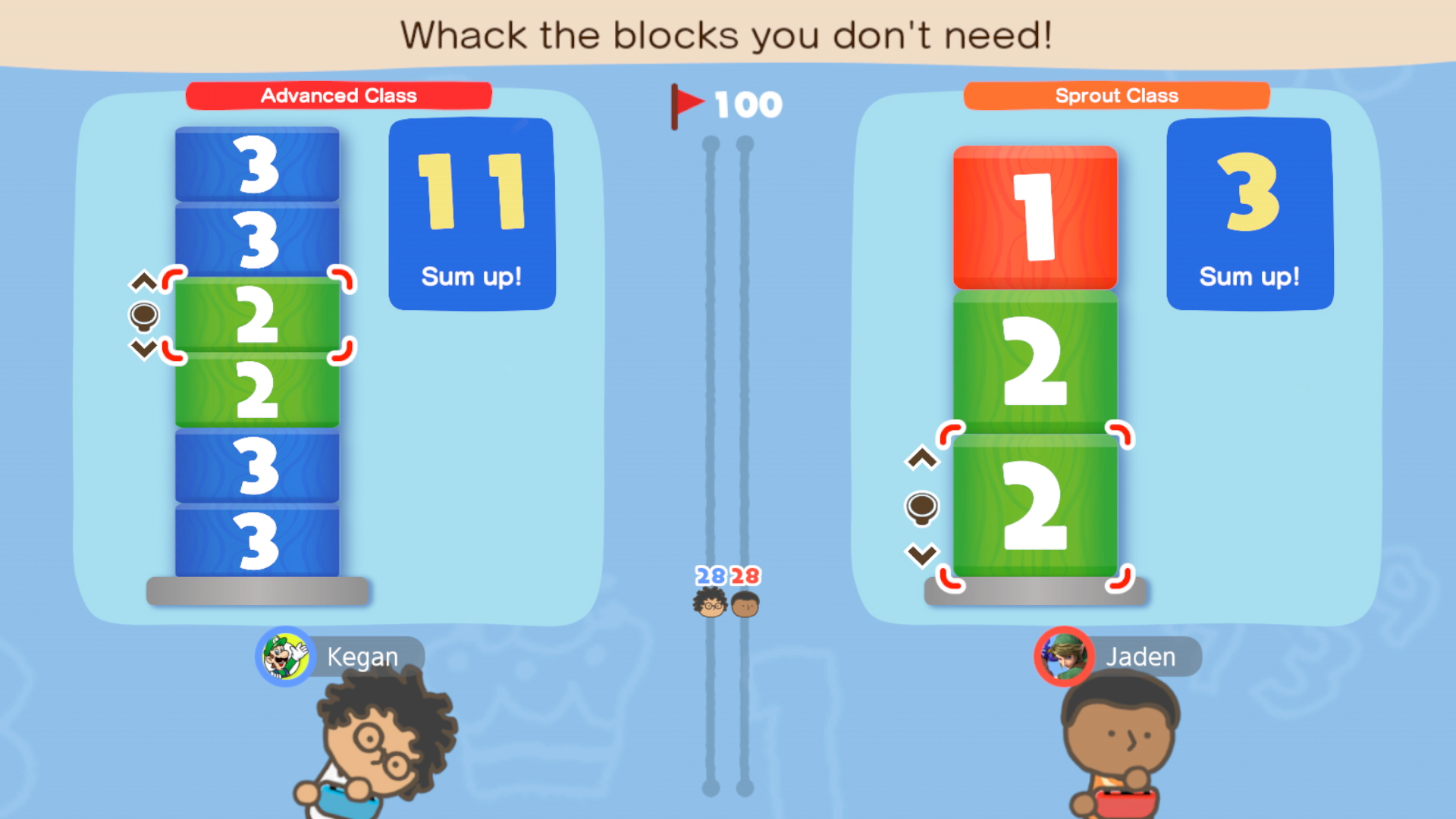 Test your mental agility against all-comers in the latest version of Big Brain Academy, where asserting your intelligence is guilt free.

Nintendo’s blue ocean strategy might be synonymous with the Wii and DS era, but games geared towards a broader audience still have a presence on Switch. A version of Dr Kawashima’s Brain Training was released last year to appeal to Sudoku addicts, while Ring Fit Adventure continues to be a sales juggernaut in the fight against pandemic pounds.

One franchise from the Wii and DS era that hasn’t been seen for a long time is Big Brain Academy; the less clinical alternative to Dr Kawashima’s brand of brain training. However, at their core, both games offer the same mini-game puzzle loop: practise, take a test to earn a grade for your crusty brain, and repeat until you’re self-improved. Aside from the games themselves, the main difference is the presentation, with Big Brain Academy possessing less scientific justification and more yellow, goofy blobs in graduation hats.

14 years since its last instalment, Big Brain Academy: Brain Vs. Brain repeats the formula with a slight competitive tilt. Multiplayer has always been the franchise’s unsung selling-point, pitched on the appealing bragging rights of proving who’s the smartest (or the fastest at solving light puzzles) among your friends. This new entry expands the package’s longevity across the board, but it’s surprising how conservative the improvements are after over a decade.

Brain Vs. Brain boasts 20 mini-games split into five categories: identity, memorise, analyse, compute, and visualise. You can practise them individually to earn gold medals from Dr Lobe, or take a test – which randomly challenges you to a game from each category – to earn a Brain Grade. This shows your weaknesses and strengths in a pentagonal diagram, highlighting the areas you need to improve.

Technically, Brain vs. Brain features the most mini-games of any Big Brain Academy entry, but it’s disappointing that the majority are from previous titles. CubeGame, Heavyweight, and Shadow Shift were in the original DS game, while highlights from the Wii entry, like assembling train tracks in Train Turn, also return. That makes Brain Vs. Brain closer to a greatest hits package, which might disappoint those who’ve already invested significant time in past entries.

There’re three new games in total: Frame Filler, where you have to figure out the missing piece in a moving jigsaw; Tick Tock Turn, where you adjust a clock back and forth to set instructions; and True View, which gives you various viewpoints of an object and you select the correct one to correspond with an arrow. They’re all positive additions, which add variety to the overall selection, but… it is only three.

The amount of new content might be low, but there are better incentives to encourage daily play sessions. As you play, you’re rewarded with coins which unlock cosmetics for your avatar. It’s a small inclusion, but as your character is paraded around online, it provides a reason to return to games beyond improving your scores. There’s a total of 300 cosmetic items, ranging from clothing, goofy glasses, masks, and headwear to sport.

Outside of brain grades and customisation, there’s the drive to improve your Big Brain World Ranking in Ghost Clash. This is the centrepiece online mode where you battle against ghost data in head-to-head sprints. For the single-player experience, this competitive dimension adds a welcome dash of longevity that these games often struggle with – with the ability to challenge ghost data of friends and family on the same console, or somebody’s grandma in Japan.

Ghost Clash is both fun and an illuminating read on your soul; depending on if you embrace the callous joy in mentally eviscerating nine-year-olds around the globe. As such, the lack of direct head-to-head mode is understandable, to keep it less mean-spirited (or any losses private), but the absence of this for battles between friends feels like a missed opportunity.

The only place you can directly face-off is local multiplayer for up to four players. There’s little variety outside of playing the games individually, aside from a random variation where you take turns to spin a roulette wheel, but Brain Vs. Brain is still a fun party experience. The games are simple enough and the action fast enough to keep casual players engaged and invested – like a less intimidating WarioWare that’s easier for the whole family to comprehend.

Big Brain Academy works well using Joy-Con or Pro controllers, but it still feels best suited to handheld mode using the touchscreen. That’s especially apparent in Ghost Clash, where reaction times are significantly quicker if you’re prodding a screen over cycling through menus. For the best competitive experience, two players can go up against each other by dividing the Switch’s screen. It gives Brain vs. Brain some nice versatility and makes it suitable for both head-to-head sessions on the move and bigger party experiences at home.

When you factor in the £25 price tag, Big Brain Academy: Brain Vs. Brain could be considered a no-brainer, if you’re after a decent party game that’s suitable for everyone. However, the lack of new mini-games and disappointing online features does make this franchise comeback feel more cynical and lazy than it should.

In Short: The biggest and best game in the Big Brain Academy series but it still falls far short of its full potential, with very little new content.

Pros: One of the better party game options on Switch and one that’s suitable for everyone. Lots of cute customisation options. More longevity than past games thanks to Ghost Clash.

Cons: Majority of the games are recycled from past entries. Online is very limited in scope. Feels like a small step forward after 14 years.