Home » News » Borderlands 3: How To Get The Rough Rider Shield

Borderlands 3: How To Get The Rough Rider Shield 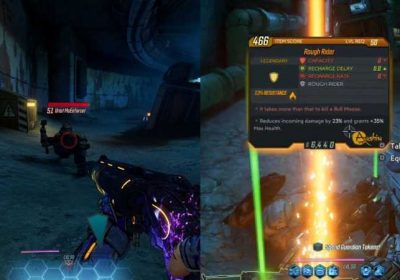 There are loads of awesome shields to augment yourself with in Borderlands 3. There are also some particularly odd ones that are just amusing to experiment with.

The legendary Rough Rider can sort of be considered both of these, but more so the latter. Here’s what you need to know about the Rough Rider and how to get it.

What Is The Rough Rider? 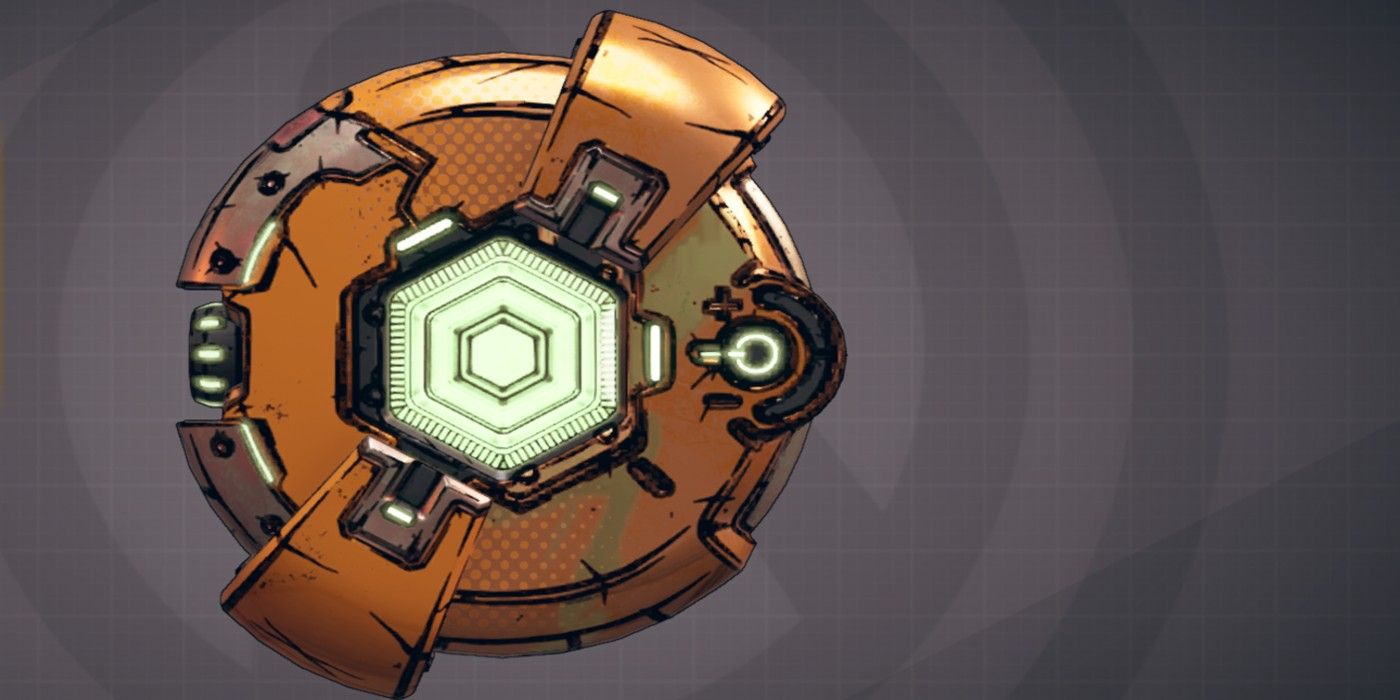 Making its return from Borderlands 2, the Rough Rider is a shield that’s been given an upgrade in status from unique to legendary. Fittingly, the shield has also been bumped up in terms of its effectiveness from that game.

Still, the item remains pretty divisive with its unique and bizarre features, which come with their pros and cons. It won’t be for everyone, but those who know how to properly take advantage of it can milk a lot of value from it.

What’s With The Name?

One fun bit of trivia first – the shield’s name and flavor text quote are a cheeky reference to President Theodore Roosevelt, who founded the military group the “Rough Riders.” He also happened to establish the Bull Moose party, explaining the seemingly random flavor text. But onto the practical details…

The Rough Rider’s Features And Benefits 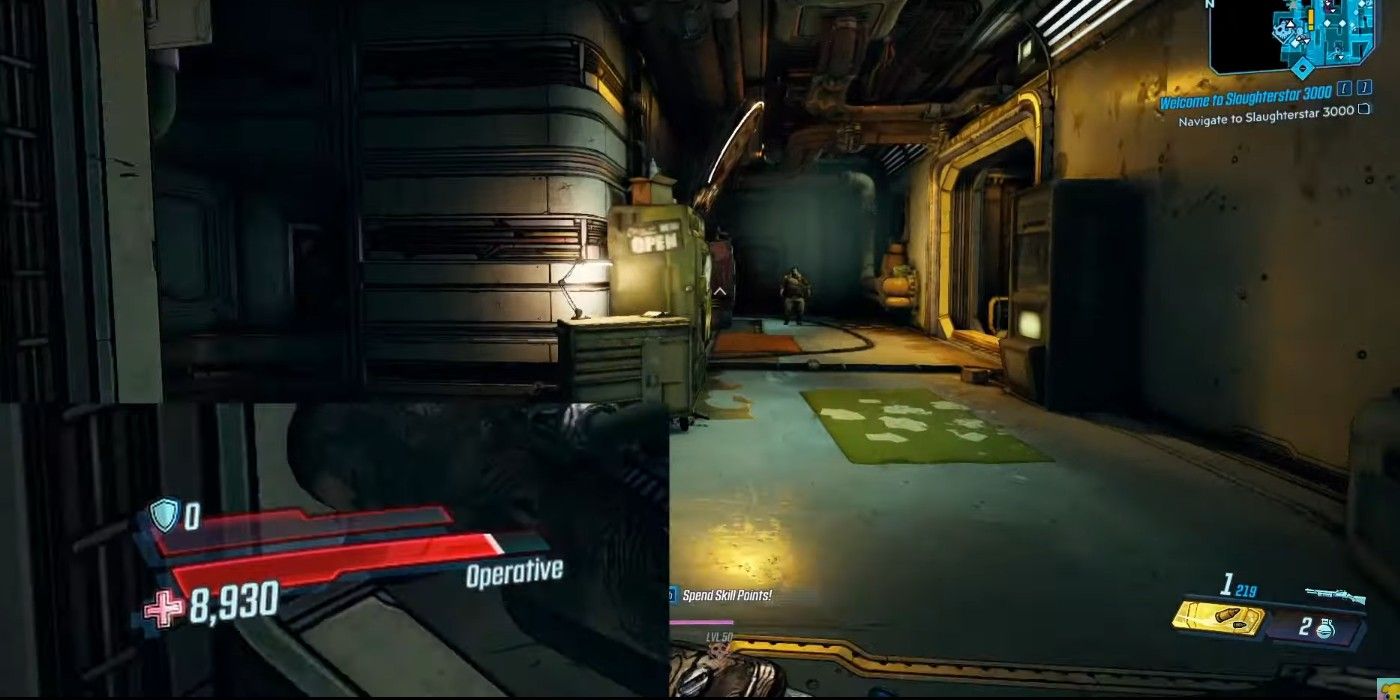 First and foremost, the shield holds the distinct feature of having a capacity of zero. Come again? Yes, this would seem to make the item useless, but this can actually be exploited under the right circumstances.

The biggest example includes the Siren Amara, whose Enlightened Force tier 1 skill, Trust In Yourself, dials up her reload, charge, and weapon swap speed following a broken shield.

Specifically, reload speed gets an initial 4% boost, charge speed 8%, and weapon swap 16%. Being a zero-capacity shield, this always registers as being broken when equipped, thus keeping these speed buffs permanent as long as you’re using it. 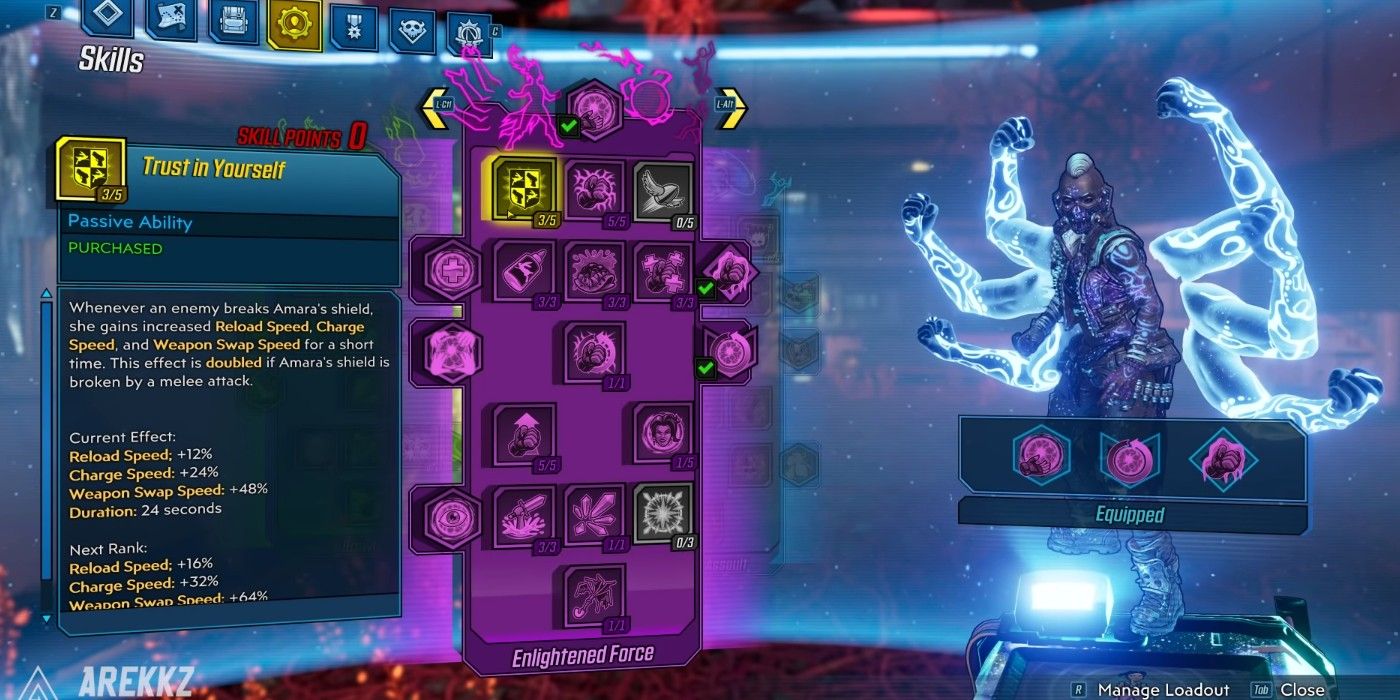 Another example is Zane’s Calm, Cool, Collected from his Under Cover skill tree. In this case, a fully-charged shield will give Zane health regeneration of 3% per second. As mentioned, the Rough Rider also registers as always being full, giving him a consistent flow of health regeneration. Pretty nifty, eh?

More significantly though is the shield’s other perks that act as a sort of substitute or compromise for the vacant capacity.

Instead of focusing on shields, the item juiced up your health and damage resistance. It takes away in one area, but it gives in another — on a pretty significant level. 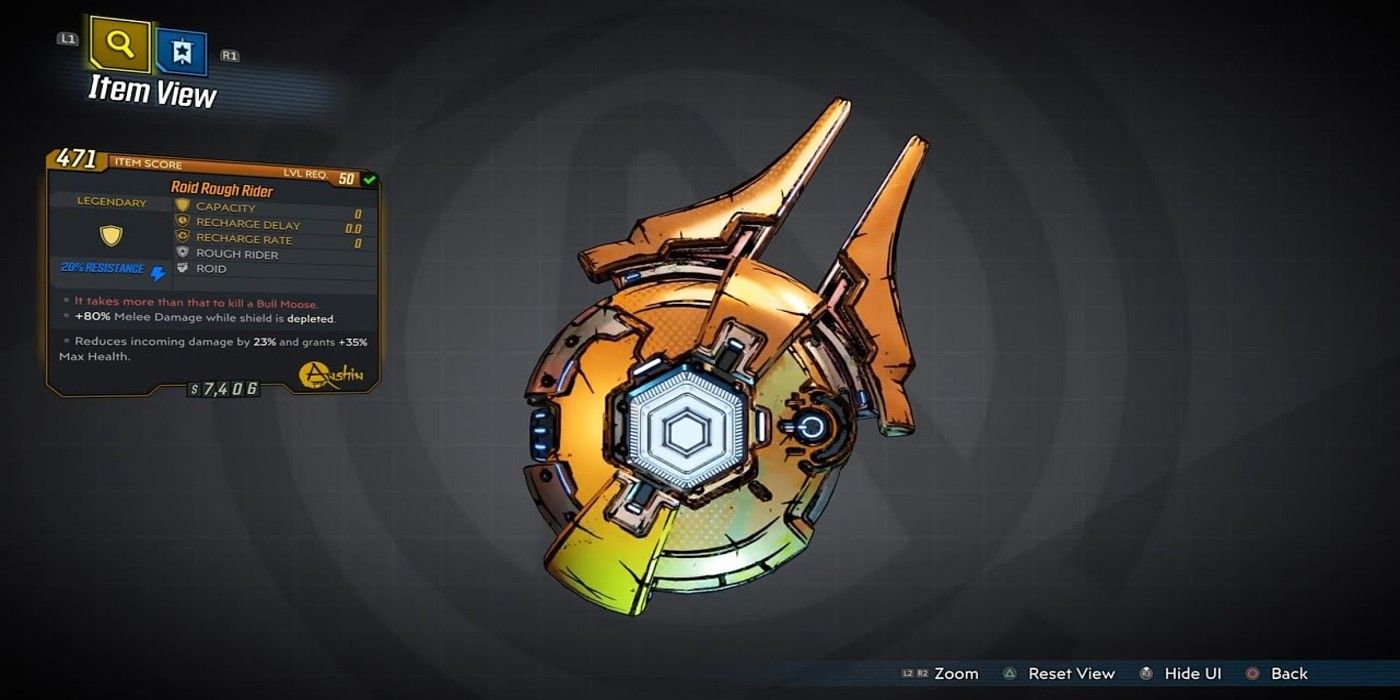 Other Notes To Keep In Mind

Where To Find The Rough Rider 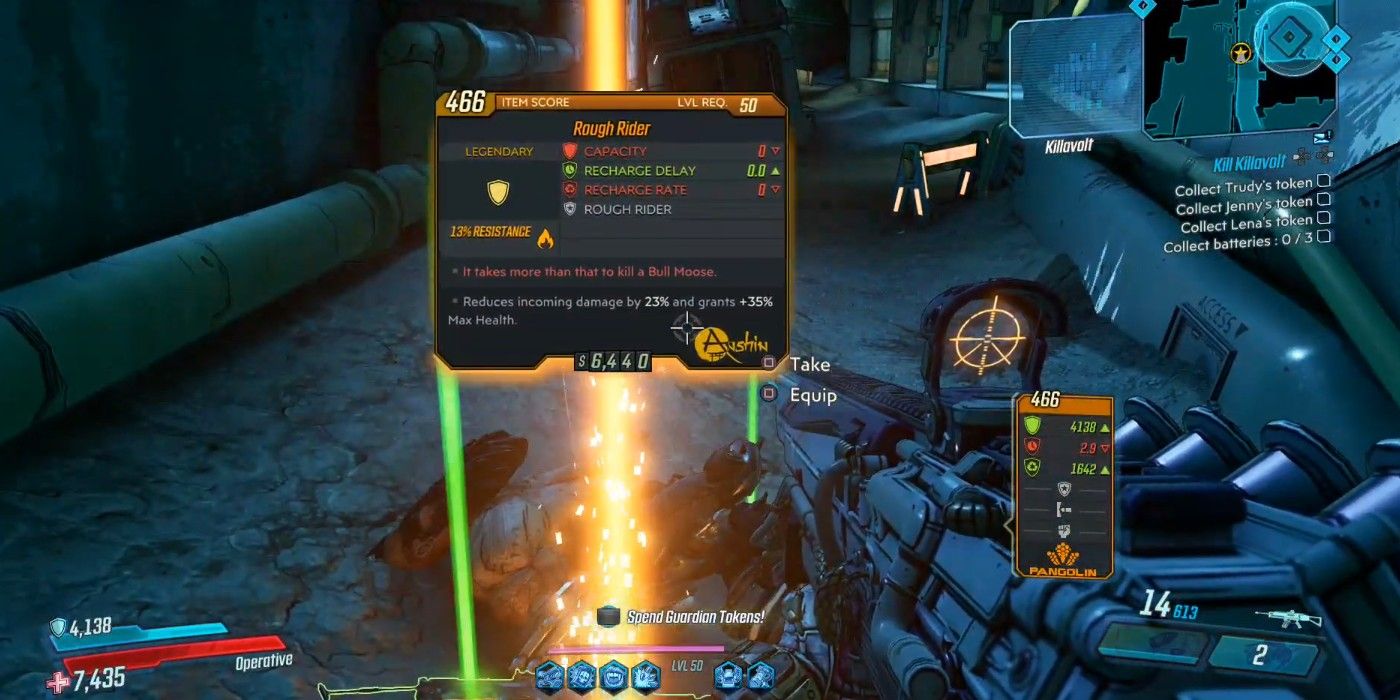 Now for an even more practical detail — where can this shield actually be found? How can it be obtained? As the drops are mostly random, there’s no surefire way to have it drop or consistent location to nab it.

With that said, there are some methods that can increase the odds of finding one and enemies with a greater chance of dropping one: 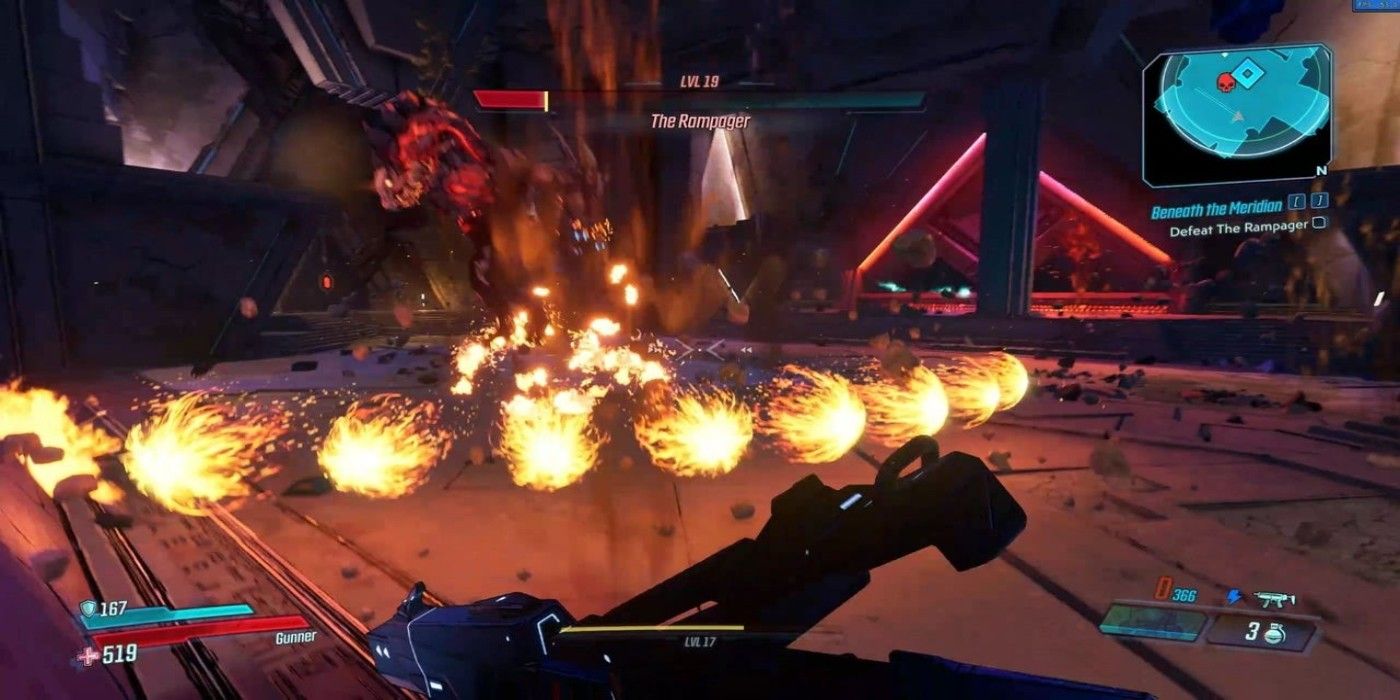