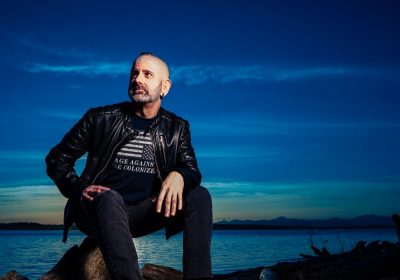 Every year thousands of school-aged children from across the Midwest make their way to downstate Illinois. Along the banks of the Mississippi River, wedged between St. Louis and the world’s largest catsup bottle, they spend a day touring the remains of one of North America’s oldest cities, now known as the Cahokia Mounds.

Cahokia is a mysterious place. Shortly before it was abandoned in the 1300s, it had grown to be the same size as contemporary London. But, long before European settlers invaded the area, Cahokia’s more than 80 man-made hills and terraces had been largely empty for centuries. No one really knows who constructed the mounds or why. The only certainty is that they were the ancestors of modern-day Native Americans.

That mystery — and that point of pride — is partly why game designer Connor Alexander chose Cahokia as the setting for Coyote & Crow. His tabletop role-playing game has been gathering steam for the better part of a month now, earning more than $816,000 in crowdfunding. That ranks it among the highest earning TTRPG campaigns of the year on Kickstarter.

What makes this project unique is that it’s being created by a team largely composed of Native Americans and members of the First Nations. Alexander is a member of the Cherokee Nation, and his team includes members of more than a dozen other tribes.

Alexander describes Coyote & Crow as a fantasy world, one stripped clean of its colonial baggage. He wants this timeline to represent a safe space for both Native and non-Native players to explore a world together, and that made Cahokia the perfect setting.

“No living culture can claim Cahokia as direct descendants at this point,” Alexander told me. Those mounds in downstate Illinois represent a blank space on the map where an unknown Native American culture once stood. It’s a meaningful place for modern-day Natives because of what it represents of their past. But it’s also meaningful for non-Native people who today recognize Cahokia as a place where they can learn more about the history of colonization and their role in it.

What better place than Cahokia to set the alternate history of Native Americans and First Nations?

Alexander explained that Native Americans and First Nations people were migratory and highly adaptable. Over the generations they mixed with and consumed other Native groups entirely, transforming themselves together into something new. By extending that history out hundreds of years along a parallel timeline — one completely uninfluenced by Europeans of any kind — he and his team have been able to create new cultures and traditions that stand apart from ancient or even modern-day Native Americans.

It’s a space that he hopes that Native and non-Native players can explore with ease. The final product, he says, will be filled with guidance on how both groups can safely share that narrative space.

“We have these callouts throughout the book,” Alexander said. “If you’re Native, you can do this. Or, if you’re non-Native, please don’t do this. But, outside of that, I can’t emphasize enough that this game is created by a group of Natives for everyone — and as an offering. It’s meant as a place for us to share something.”

This was something at the forefront of my mind when reading about Coyote & Crow, and a concern I raised with Alexander. Should I, a person of white European descent, feel comfortable playing in a fantasy world of Native American and First Nations people? He said it’s a concern that’s been raised by many people and potential players of his game. So much so that he penned an essay on the subject of cultural appropriation in an update posted on Kickstarter.

Let’s talk about the “A” word. And I’d like to start off by providing a simple analogy. Let’s say a person travels to a different country with a different culture from their own and someone invites them into their home for dinner. They sit down at the table and when they’re offered food they say, “I wouldn’t feel right eating this. It would be appropriation.” Hopefully it’s obvious how off target that is. Yes, the analogy isn’t perfect. But my point is this: Appropriation, at its root, is about taking. What we’re doing is giving. And what we’re giving you is fictional.

In addition to helping players avoid the pitfalls of cultural appropriation during play, Alexander and his team are also adding ways for Native American and First Nations players to bring their lived experience into the game. In this way, players can carve out a place for their own modern-day cultures within this idealized, uncolonized future.

“Hopefully there’s a familiarity there that’s comforting to Natives, and that they can see themselves in [Coyote & Crow] without it ever feeling like they’re being caricaturized,” Alexander said. Right now, he’s keeping most of those excerpts and mechanics close to the chest. We’ll have to wait until the final product is delivered in November to see if he and his team have been successful.

But what does the success of this Native American-led project mean for the future of independent TTRPGs? Alexander says he’s cautiously optimistic about the prospects for more inclusion going forward.

“I’m hopeful, especially in the last few months,” he said, pointing to the success of Wizards of the Coast’s Candlekeep Mysteries, which included content from a wide array of diverse writing talent.

“I think the motivation is OK,” Alexander said, speaking about the desire to bring fresh voices into the industry. “But I think the execution is still flawed. I think part of the problem is that a lot of the execution is coming from a place of, ‘Hey, we need to do this because we’re getting yelled at a lot for not doing it.’ I think the flip is going to come when people start realizing, ‘Oh, there’s there’s actually really good money to be made here by doing it right in the first place.’”

Most importantly, he sees the success of Coyote & Crow as a way forward for Native American and First Nations authors and artists to gain a foothold in the games industry as a whole.

“I am hoping that my specific RPG sort of turns a corner and gives everybody involved an opportunity to work on further games — role-playing games or not,” Alexander said. “But I want everybody on my team to be able to use this and go, ‘Look, I worked on this Kickstarter. Get me a job in the industry.’ I would love that.”