Brie Larson Is Confirmed To Be Playing The Paradigm In Fortnite 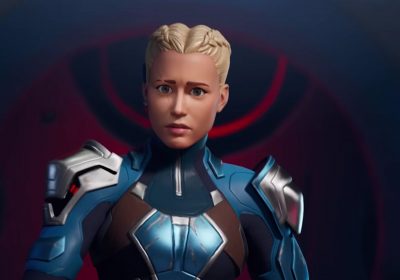 The cinematic trailer for the latest season of Fornite has confirmed a long-standing rumour that The Paradigm is voiced and modelled after Captain Marvel herself, Brie Larson.

Today marks the launch date of Fortnite's latest season, one that turns much of the inhabitants and areas on the island into chrome. As is tradition, Epic marked the launch with a new cinematic trailer, one that focuses on several members of The Seven as they encounter the chrome substance from themselves.

In the cinematic trailer, we also get to see our first look at The Paradigm unmasked and, wouldn't you know it, she's clearly modelled after Brie Larson. We also get to briefly hear her speak and it certainly sounds like Larson is voicing the character too. The rumour that The Paradigm would be voiced by Larson started some time ago when Fortnite fans noticed that Donald Mustard, chief creative officer at Epic, started following her on Twitter.

It shouldn't come as too much of a surprise to see Larson getting involved in Fortnite, as this actually isn't the first time. Last year, Larson teamed up with Fortnite to introduce her own locker bundle to the game, which contains cosmetics that she has picked out for herself, most notably including Bushranger.

Of course, anyone who's kept even a small eye on Fortnite over the past few years will know that Brie Larson isn't the first character in the game to be modelled after and voiced by a celebrity. That honour goes to The Foundation, who was long-rumoured to be voiced by The Rock thanks to his body markings matching Johnson's tattoos, something that was then confirmed to be true many seasons later.