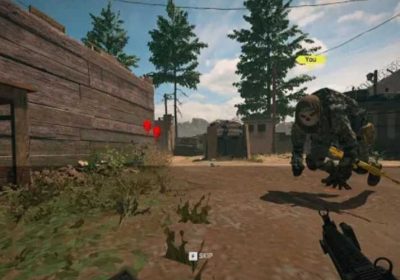 Call of Duty season is in full swing as Modern Warfare 2 has been around for a few weeks and now Warzone 2 has joined it. The games are currently in that sweet spot where players are finding fun and sometimes annoying issues, but Infinity Ward hasn't had the chance to fix them yet. Exploits such as the terrifying G Walk below.

Dubbed the G Walk by Euphoria, the group who appears to have created it, the movement makes players gallop around on all fours. As you can see, it's pretty creepy. Now imagine you're the player minding their own business, casually playing a few matches online, only for an enemy to come bounding at you round the corner like an oversized dog, or even jump at you from a window above.

As is quickly becoming commonplace with features and exploits in Call of Duty's newest games, the G Walk has players pretty split. Some think it's hilarious, and it's certainly making for some amusing videos on social media. However, others who take their Modern Warfare 2 playing more seriously aren't happy about it, claiming the movement is ruining the game and needs to be patched ASAP.

The problem with that is Euphoria is unwilling to let anyone else in on how exactly the movement works. Understandable since right now, only members of its group are able to use and benefit from it. As soon as others are clued in on how to do it, Modern Warfare 2's maps will quickly fill up with players crouching down on all fours and bounding around in search of their prey.

On the Warzone side of the Call of Duty coin, its proximity chat that currently has its player base split. Some believe it opens up the game to toxicity between players, while others are using it for fun things like roleplaying as an Uber driver. As for Activision, the studio behind Call of Duty, it continues to face various lawsuits following the results of an investigation accusing the studio of harboring a toxic work environment.