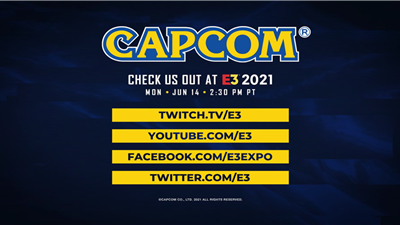 In a short video posted on its YouTube account, Capcom announced the timing and date for its E3 presentation, as well as revealing some of the games that are going to be shown. The four games it has listed include The Great Ace Attorney Chronicles, Resident Evil Village, Monster Hunter Rise, and Monster Hunter Stories 2.

Currently there are no single-player expansions announced for Village, although considering the game’s success that could possibly change. Resident Evil 7 saw some DLC episodes, ranging from a weird birthday thing to actual story content, so it’s not far-fetched to think that Village could do the same. More likely than that would be some new maps or modes for the game’s Mercenaries mode.

Although it appears that Capcom has been pretty upfront and clear about what it intends to show at this event to make sure that fans are getting overly excited, there’s always the chance that they’ll bring something else to end with, or at least tease more projects in the works. Most presentations have a “one more thing” moment, and there are plenty of good guesses for what Capcom could bring.

The most exciting, albeit obvious, possibility is to tease or announce Street Fighter 6, something that has been all but announced at this point. We could also possibly see Pragmata, the weird Hideo Kojima-looking game that was shown during the PS5’s unveiling. That one seems a little less likely considering its delay to 2023, but it’s possible considering how little we know about it at the moment.