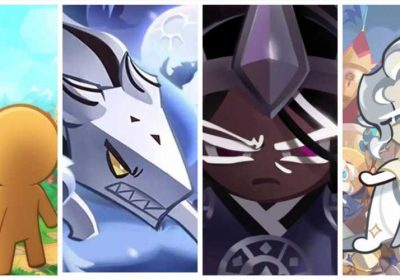 Support in games can mean a myriad of different things: healing, buffs or debuffs, shields, etc. Cookie Run: Kingdom is no exception to this, and its support class is just as cute as it is varied. Some cookies focus on keeping the party's health up, while others will boost their attack while summoning creatures to do their bidding.

Each of these characters is viable and can bring useful tools to each party, but with most of them, they do double duty between attacking and supporting, which makes them slightly weaker than cookies that are straight powerhouse attackers. Still, that doesn't mean you should sleep on anyone on this list.

A sad cookie with an even more devastating backstory, Onion Cookie isn't the first you think of when talking about straight combat ability – she has no auto-attack.

Instead, her ability AOE damages enemies while lowering their attack for six seconds, but if you are trying to build a debuff party, she could be an asset if you are still trying to get better cookies. Her base stats are low, and let's face it, she is too pure to be cast into battle like that, right?

She isn't aware that she is a ghost, and the ones who look after her don't want to tell her because they think it would make her sad(der). Blackberry Cookie has the closest relationship with her.

The hardest working cookie you'll find, Carrot Cookie isn't afraid to choose violence and hurl those well-cared-for carrots at anyone who stands in her way of growing bigger produce. Cookies that party with her will be so impressed by her work ethic and the speed she launches those carrots, they will receive a 20 percent increase in their defense.

The reason she isn't higher on this list is that other support units can buff defense as well as, if not better than, Carrot Cookie. If you aren't looking for a 'meta' build and just want to build a party based around your favorite cookies, then she is a viable unit who can help boost defense during a boss attack in a pinch.

The normal, strait-laced cookie surrounded by chaotic cookie magic must have the dough made of tough stuff if he wants to solve cases with pinpoint accuracy. Just be sure to treat him to a cup of coffee as a thank-you. Almond Cookie will take out his handcuffs and stick them on the cookie with the lowest amount of HP and spread the damage that cookie receives to the surrounding cookies.

This hardworking cookie is on the brink of exhaustion and explains why despite his graying hair (is that hair?), he is only in his mid-30s. Though his special can't be interrupted and does decent damage, it can only be applied to cookies – not summoned creatures of any kind.

Do not let her soft, loving demeanor fool you; Fig Cookie is ruthless if you endanger her or the nature she loves and respects so much. She will use her horn and call down the feathered fury of her bird friends to attack anyone she wants to be attacked. She will do it with the most joyous smile on her face and won't even feel bad about it.

The sight of Fig Cookie's fig birds speeding towards her opponents will shock them, dropping their attack by 26 percent for six seconds. When she isn't defending her forest, she can be found reciting stories of old to all the woodland creatures that gather around her with absolute attention.

The flower-scented assassin, with steps as silent as the night, cuts his enemies down without alerting anyone around, leaving only petals of lilacs as his calling card.

He is a cookie of mystery and charm as his ability gracefully sends out multiple chakrams at his enemies in a dance so smooth and fluid that it impresses his teammates and boosts their attack power, attack speed, and damage the enemy takes.

He isn't the biggest damage dealer of the epic class of cookies, but he is the only support cookie that boosts the other cookies' attack power directly with his ability. So, if you like your cookie with an air of mystery, he's worth putting on your team.

Don't let the rarity of Clover Cookie fool you, his skill set can tip the scale on whether you pass a level or not. His music ability's main use is to regenerate your party member's health, but it soothes your party, relieving them of any debuffs they've gained during the battle.

Clover Cookie travels the lands for a simple reason: he wants to travel the world and gain inspiration to create new music everywhere and anywhere he goes. It's a simple life, but one that spreads love and joy to the other cookies. This lover of nature will be a good asset to have in your party – he might even be on par with some epic cookies as well if you equip him with optimal toppings.

She will do anything for her master, and she will let everyone know it. Originally a priestess of her village's sacred religion, she eventually betrayed all she knew to follow the darkness that had destroyed the very same village she initially swore to protect. Though she is a follower of the darkness, her ability contradicts this by being a healing ability. She casts regen and heals her party for a percentage of health for five seconds with a 30 percent attack boost for seven seconds.

For now, the only thing known about her aside from her origin story is her endless pool of devotion she has for her master, so much so that some have speculated there may be romantic feelings hiding under her devotion.

From the humble beginnings of being a street performer to being recognized and lauded for his talents globally, Mint Choco is passionate about one thing: music. Unlike the bard Clover Cookie, who enjoys a more personable experience in music, Mint Choco is the more classical traditional musician who plays concerts.

His ability is straightforward as well: Battlefield Symphony heals for a percentage of the cookies' attack power while increasing the party's speed by at least 40 percent. His auto attack sends music notes to attack his opponents, which isn't anything spectacular, but it's cute and it would be a crime not to mention it. Also, it's rumored that his hair is modeled after Beethoven's iconic do.

One of the newer cookies to come to the game, Oyster Cookie, is certainly making a powerful splash of an entrance, summoning her guards in battle, and boosting the party's crit percentage and crit damage for the entire party. Her guards have their stats boosts to defense, plus they gain an attack boost for every cooldown reduction buff Oyster Cookie receives.

Cookies will say that Oyster Cookie of the sea comes from a mermaid of myth and that her power to turn the tides in business and maritime matters stems from the mermaids' power to control the seas. She would laugh it off, but that only adds to the mystery surrounding her, officially giving her baddie status.

Cute as cute can be, Cream Puff cookie is a magical prodigy. She studied the arcane arts on her own as a young child until she entered and graduated from the Magic Academy with the highest honor. She is the youngest graduate of the academy and now spends her time trying to become a famous wizard.

Her ability works off the crit stat, but not in the same way as if she were to attack. Instead, her casting success rate and base damage to her attack highly depend on her crit, but in exchange, she cannot cause crit damage with the attack. As a bonus, her crit also determines the amount of HP that will be healed. It sounds a little convoluted, but if built with the right toppings, she will hit hard.

The third support musician, Parfait Cookie is already the newest up-and-coming celebrity throughout the land. Her music is just as bold as the toppings on her head, all her songs come from the heart, and anyone who comes across her music will be able to understand her feelings through her songs.

Parfait's earnest songs regain some HP for the party while increasing their defense and debuff resistance, instilling in the party the same resolve she dedicates to creating her music. She can be a great asset to the team if you are trying to go for a defensive build, and she's a great backup healer to have.

Whatever you do, do not bring random items to Éclair Cookie expecting to get an appraisal. He is only interested in ancient relics that tell stories of times long passed. A scholar down to his flour, you can always find Éclair Cookie studying and searching for new things to discover.

Because of the extensive wealth of knowledge he possesses, Éclair is adept and pinpointing an enemy's weakness, causing a sizable chunk of damage to three targets. His special also grants the party a protection barrier that protects them up to 25 percent of their total HP. His glyphs are supposed of Anglo-Saxon origin, meaning sun and elk, respectively.

A soft, gentle light amidst the world shrouded in darkness, Cotton Cookie is a gentle and kind cookie who will help any soul in need. She uses her light in battle to summon her herd of sheep to attack her opponents while healing the party at the same time. If her lantern is lit, both the party and her flock gain an attack increase.

You wouldn't know it by looking at her, but looking at her abilities, you will understand that she would do anything to protect her flock. This just makes it sadder that she's waiting for someone who might never see her light and return to her. She deserves to be protected at all costs.