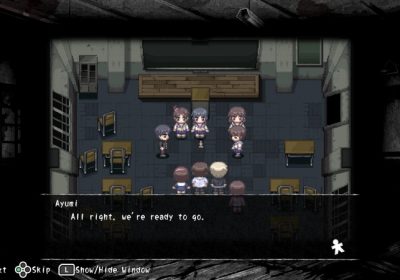 The cult classic Corpse Party is shambling back into the spotlight in time for Halloween. The 16-bit horror title, which sees a group of young school students getting picked off by all manner of ghouls and ghosts, is heading to modern platforms with additional content.

This re-release is simply dubbed Corpse Party (2021). It features all of the content and five main chapters of the original (that is, the game that hit North America starting in 2011) but tacks on 16 “Extra Chapters” that expand the story and feature full Japanese voice acting for the first time. The game also includes a pair of episodes that add two new characters and storylines.

If you’re new to Corpse Party, it’s a choice-driven adventure game where you guide a party of schoolchildren through their now-haunted elementary school after an occult ritual goes awry. Your decisions impact who walks out of the building in one piece and a plethora of outcomes exist, many of them gruesome. Don’t let Corpse Party’s innocent appearance fool you; it can startle you in ways you might not expect. While horror is the star of the show, getting to know the stories and interpersonal relationships of the unlucky youngsters is just as much of a selling point. In our review of the 2011 PSP port, we scored it 8 out of 10 with reviewer Phil Kollar stating “if you have an appreciation for gory splatterfests from the theaters, this is one forbidden ancient ritual that you should take part in.”

If you’re looking for another spooky title to add to your Halloween rotation, you can find this polished-up Corpse Party on Xbox Series X/S, PlayStation 4, Xbox One, Switch, and PC on October 20. You can buy it for $19.99 and the PC version includes a bundle with the original Corpse Party. Speaking of which, if you already own the old version of Corpse Party or decide to buy this new one, you can pick up the opposite version with a 25% discount on Steam and GOG only.

Are any Corpse Party fans interested in revisiting this enhanced edition? If you have been curious about the franchise, does this convince you to finally pull the trigger? Let us know in the comments!