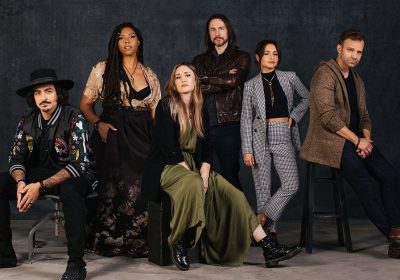 After six years, two campaigns, and 265 livestreamed episodes, Critical Role is doing something new in the world of Exandria. The Dungeons & Dragons actual play series is launching an eight-part mini-campaign with a new Dungeon Master (DM). The story is set some thirty years after the end of season one, and a full decade after season two — which featured a group of characters known as The Mighty Nein. Best of all, creator Matt Mercer will be joining the fun as a full-time player character.

The new actual play series is titled Exandria Unlimited, and it kicks off on June 24 on Twitch and YouTube. Taking the reins as DM will be Aabria Iyengar, CMO of Dice Envy and a popular actual play performer in her own right. Fans of Iyengar’s work will recognize her from Mother Lands (Koseh), Happy Jacks (Tendai Collier the Joined, Khairyn Antwi), Dimension 20 (Myrtle the Bitch), and Saving Throw — where she also spent time as the DM.

“I know Exandria better than I know the Forgotten Realms of core Dungeons & Dragons,” Iyengar told Polygon in an interview, “So when the opportunity arose, I was like, ‘Yeah, I have thoughts, opinions!’ I have been emotionally invested in this world for so long. […] I couldn’t imagine a better squad of people to spend time with and build a story with.”

Mercer, who created Critical Role, will be joining the campaign as a player for the very first time. He tells Polygon that he’s excited to welcome Iyenga to the table.

“I’ve been following Aabria’s work for a long time,” Mercer told Polygon. “There’s so many [actual play performers] out there, but certain people just catch your attention and Aabria’s been one of those people. We brought Aabria in and she continued to blow all of our expectations out of the water.”

The rest of the cast will include Aimee Carrero (Elena of Avalor, Blindspot) and Robbie Daymond (Marvel’s Spider-Man, Sailor Moon) along with Critical Role founders and veteran voice actors Ashley Johnson (The Last of Us, Infinity Train, The Avengers), and Liam O’Brien (Spider-Man, Star Wars: Rebels, The Last of Us Part II).

When pressed for details, Iyengar and Mercer were unable to reveal much about the premise of the mini-campaign. Mercer did tell Polygon, however, that he will be playing a character “very different” from his normal archetypes.

“I’ve learned a lot from Travis [Willingham] to really embrace the chaos,” Mercer warned, referring to one of his co-stars from the series, known for his over-the-top antics. Mercer also seems particularly keen to be playing one character instead of dozens at a time.

As noted above, Critical Role has previously spent hundreds of hours on each of its two prior campaigns. This time around, fans should expect a more concise experience. It’s just the thing for those who might have been put off by the sheer amount of effort required to get current with previous campaigns. The story will draw on existing lore, but this is a whole new adventure with fresh faces and unique stories to tell.

Critical Role stumbles with its first board game, Uk’otoa

“It’s the perfect thing because it creates this narrative scalpel,” said Iyengar. “It’s a very different type of storytelling in a familiar world.”

Exandria Unlimited is currently in production, and all episodes will be pre-recorded before they air. This new style should allow for a more edited and driven narrative. It’s an experiment of sorts, and it could potentially inform the format of the series going forward.

The success of Critical Role has mirrored big changes in the tabletop RPG industry as a whole. The transition began around 2015. That’s when D&D publisher Wizards of the Coast admitted to Polygon that the bulk of its marketing efforts were now focused online rather than in-person. A big part of that change is the actual play movement, in which groups of players livestream or otherwise publish their campaigns for the public. The actual play movement, of which Critical Role is just one of many groups of performers, gained industry-wide recognition with the Diana Jones award in 2018. But all that attention has also led to controversy.

In 2019, Critical Role launched a Kickstarter for an animated series based on its first campaign. The end result was an $11.3 million haul and a streaming deal with Amazon Prime. But that success also brought into focus the group’s lack of diversity.

Aware that so far he has been the only voice telling Exandria’s story, Mercer was keen to point out that he “created this world intentionally with a lot of space for other people to create and develop.” He added, “Aabria is the primary choice for anyone I trust to go ahead and run with this.”

“We’ve been wanting so badly to bring other people into the fold and let them create in the space, which is hard to do when your main show is weekly,” Mercer told Polygon. “This was an opportunity for us to step back and bring other incredible creative people in and see how it goes.”

“It was amazing, everyone was kind and open,” Iyenga added. “It’s been wonderful for everyone to have been so interested in my personal perspectives.”

“It’s been very surreal and largely accidental. We didn’t set out to do a lot of this,” said Mercer. “We want to expand properly and carefully and to make sure to allow opportunities to support the lives of others. Launching the Critical Role Foundation was a big part of that.”

He also described the foundation of Darrington Press as an “opportunity” to avoid the challenges of partnering with manufacturers who have their own commitments.

“We thought, ‘Let’s try and do this, and maybe we don’t have to worry about all those issues.’ It’s a lot of experimenting and seeing if it works. It’s very exciting, and I’m thankful we have the opportunities we do, and we want to bring in more people to help us guide the rocket.”

You can find more on Critical Role at the official website.