Cuphead: The Delicious Last Course – How To Defeat Esther Winchester 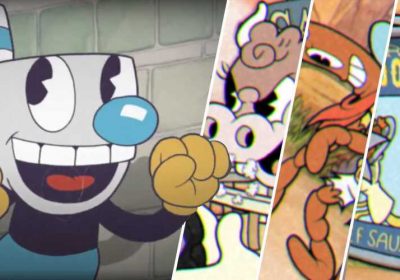 Cuphead: The Delicious Last Course comes packed with a whole host of unique encounters. And, of course, that includes another vicious side-scrolling shooter stage. Esther Winchester will have you taking to your plane once again. You will be dodging a whole host of projectiles coming at you from every angle.

Initially, it will all seem a little overwhelming, as nowhere on the screen feels safe. Fortunately, once you start to truly understand her patterns, Esther becomes considerably more manageable. So, hop back into your biplane and prepare to engage in some bullet hell-esque chaos. 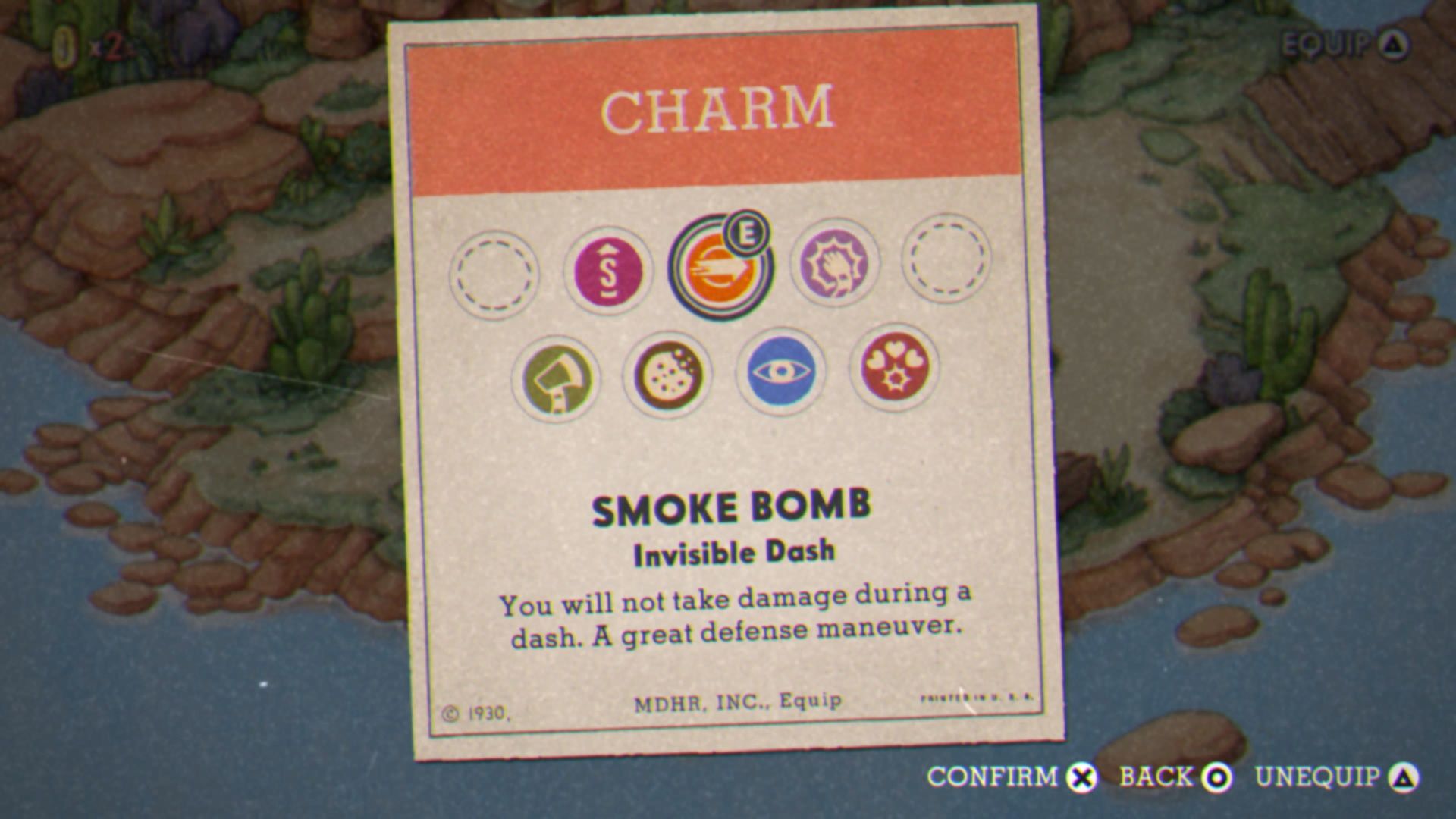 Well, you can't select any weapons here. So, the only decision to make is which charm to bring. We strongly suggest you bring the Smoke Bomb. The invincibility frames it imparts are extremely useful. It is so useful it honestly feels a little hard to justify coming equipped with any other charm.

The Heart Ring is also a viable choice, as it will help you substantially increase your health. The parriable attacks in this battle can be a little tricky, so it feels dangerous to depend on hitting them. Only go with this item if you are confident in your parrying skills.

Phase 1 – How To Beat The Snake Oil Shooting Esther 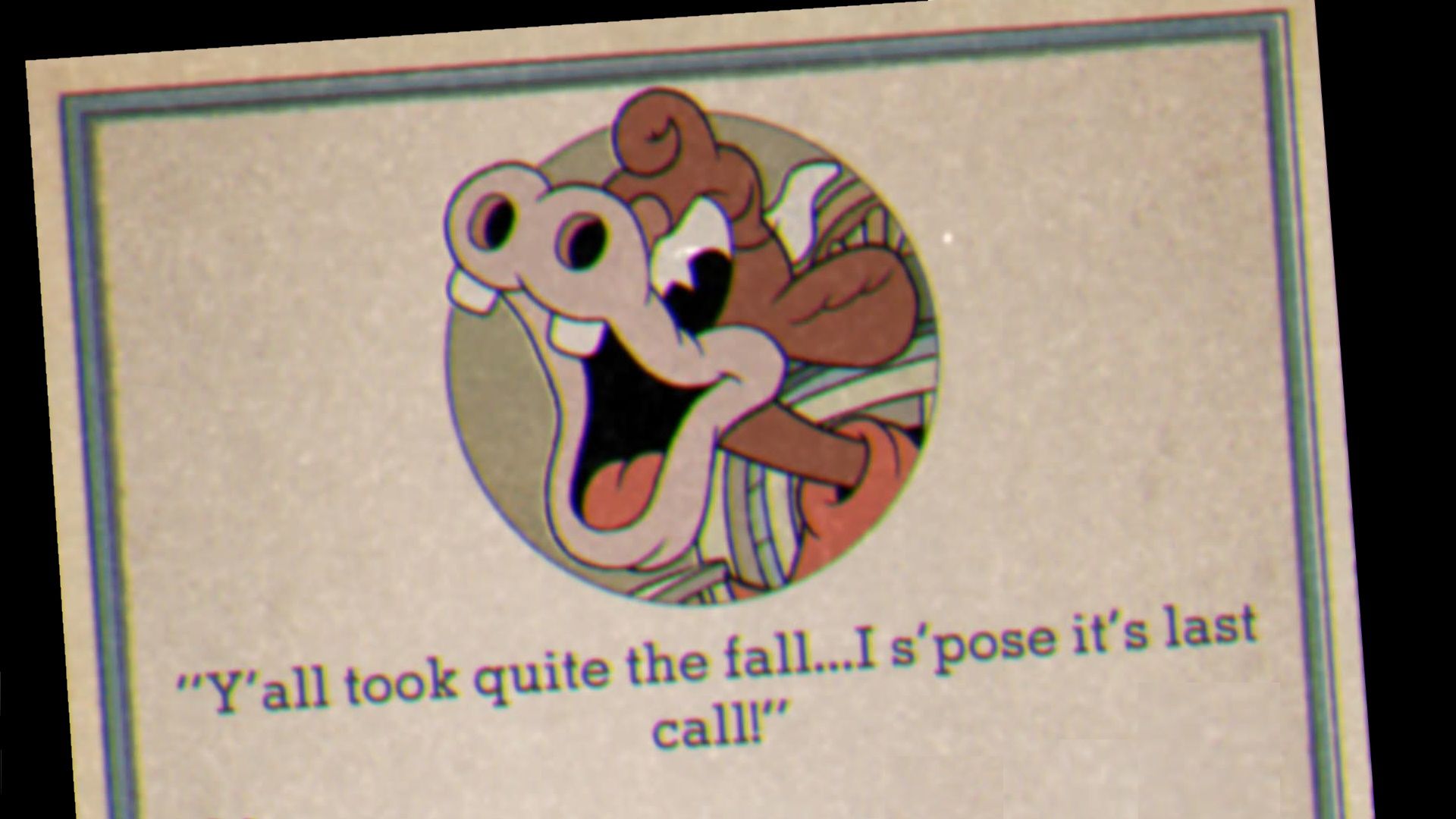 If you have already gone toe-to-toe with Esther and you have been left feeling a little shaky and without hope, worry not: this is her hardest phase. Beating her here is all about managing what is on the screen. The spiked balls the flying donkeys spit at you are one too many projectiles. So, when you see them flying in from the right side, shoot them down. 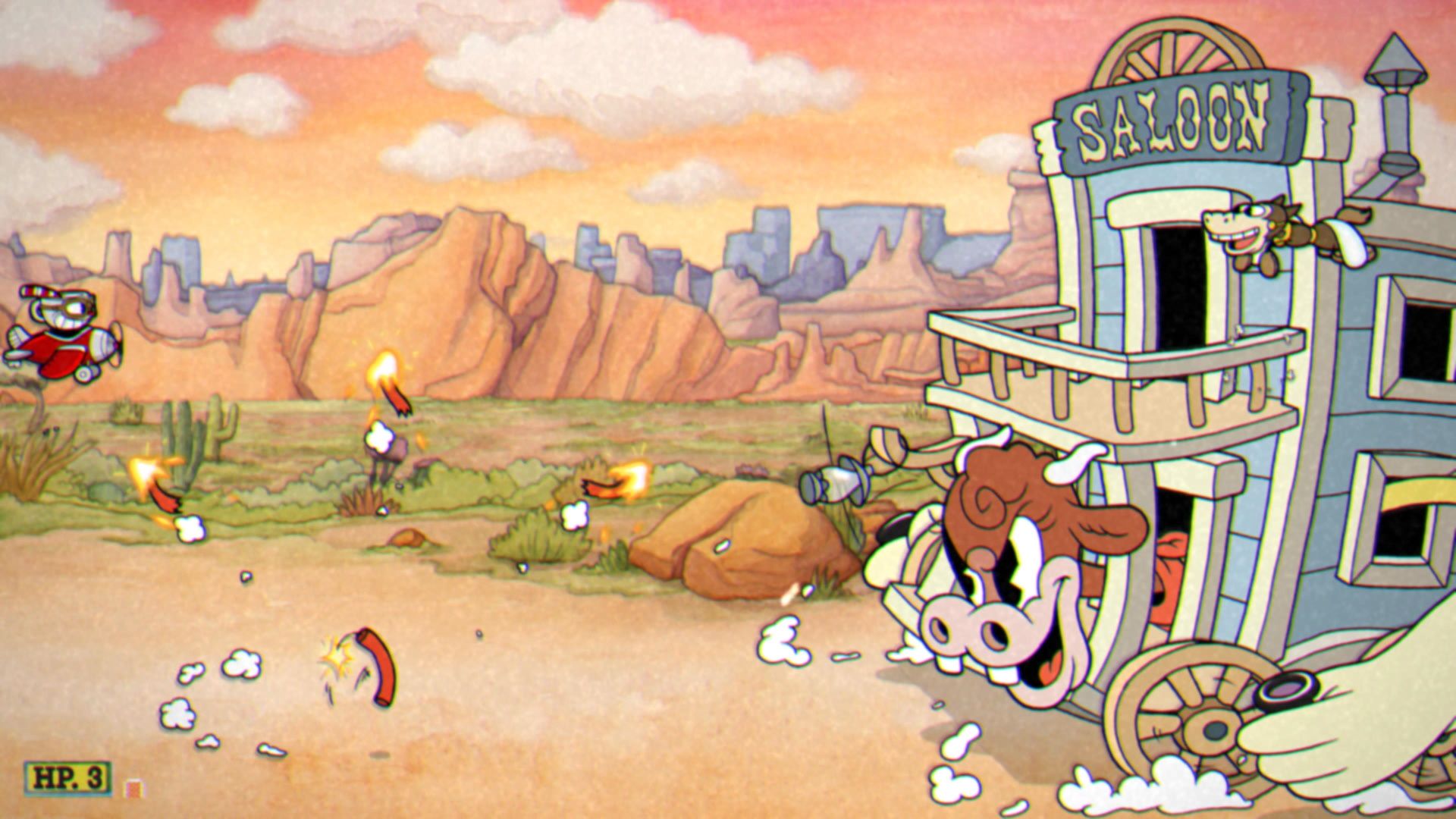 The prospector eagle will regularly appear at the top of the screen and drop a bundle of dynamite. This means that you should avoid that top strip of the stage (so you don't collide with them). Moreover, if the bottom of the screen is clear, you can wedge yourself into the bottom left corner and completely avoid the dynamite as it explodes upward. 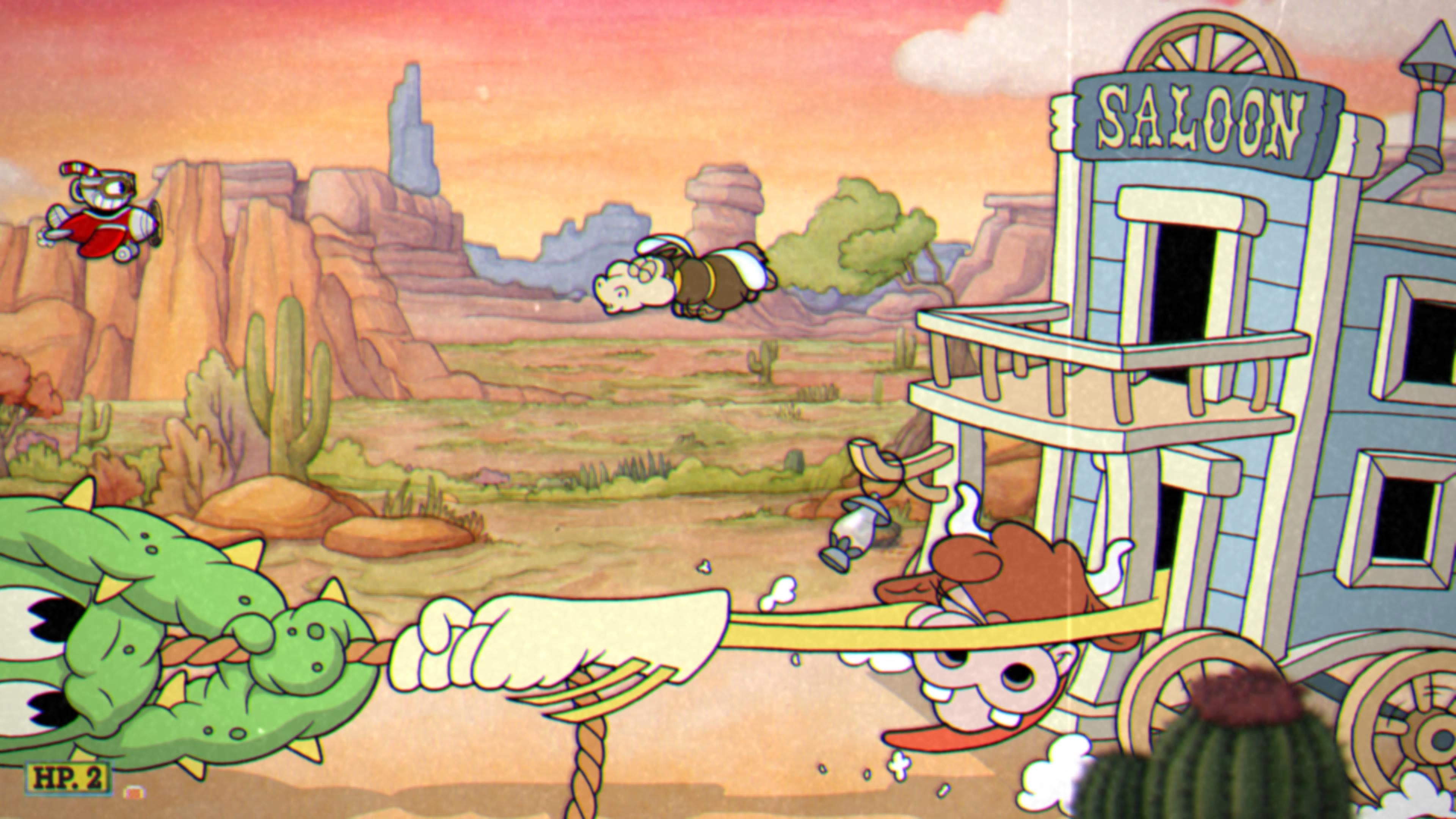 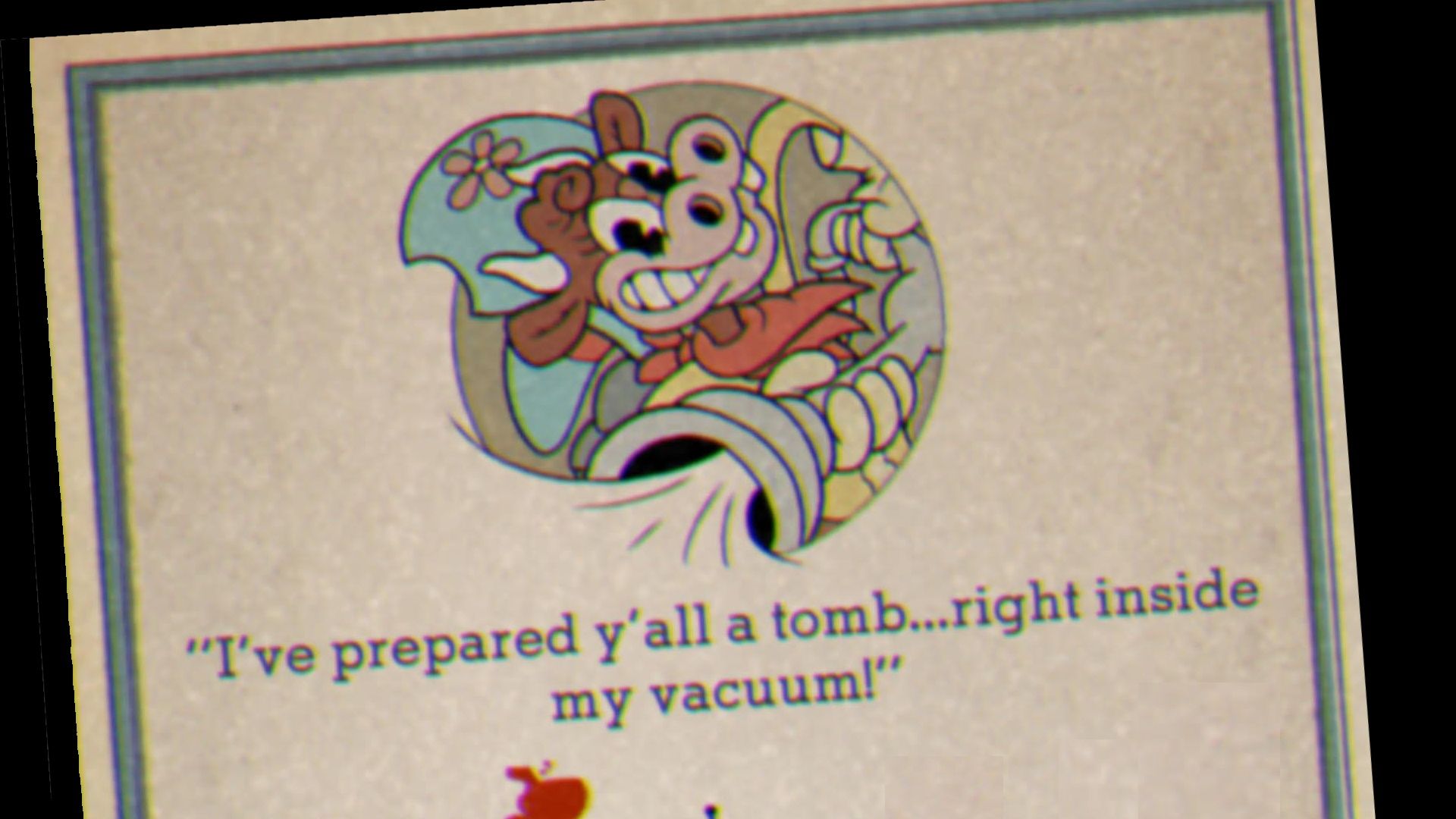 Once Esther pulls out the vacuum, the strategy is to hold down the attack button and pay attention exclusively to your character. Give all your attention to avoiding the projectiles flying toward her vacuum. You can't miss Esther here, so don't even look at her. Make sure to not be too close to the side of the screen, as you will likely end up getting clipped by an object entering the screen if you are too close to the edge. Instead, stick around the center. 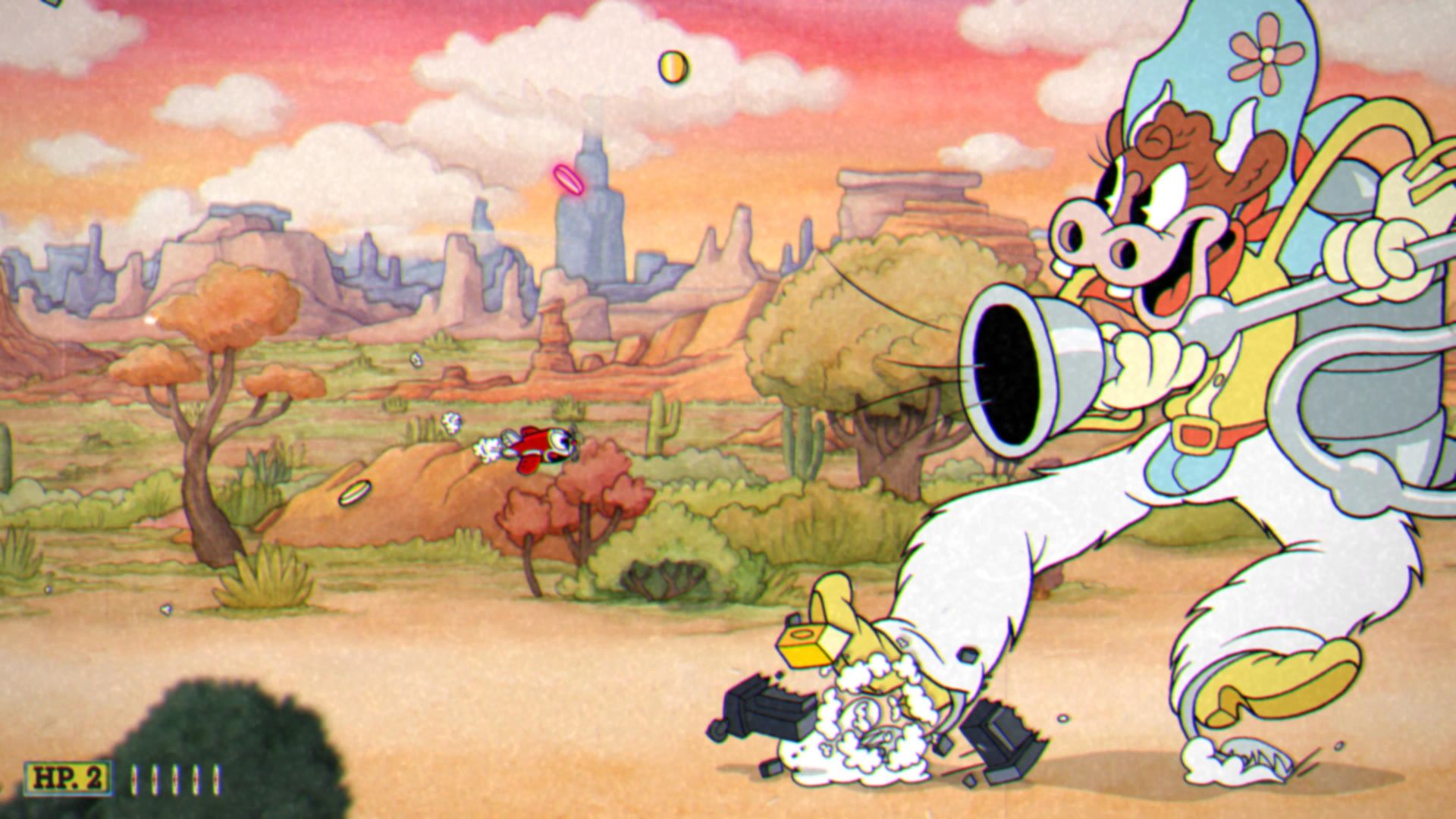 Once Esther starts firing safes out of her vacuum, you are going to want to dodge fire on her until the screen becomes saturated with objects. As soon as that happens, switch to your plane's miniature form (by holding down the dodge button) and focus exclusively on dodging the items on the screen. Once the objects have all flown away, Esther will suck them back in again. So, just repeat what you did previously.

You will almost certainly take her out before she fires the safes again. One thing to note is that when the safes explode there will be certain parriable items. If you are looking for something to parry, this could be a good opportunity; though if the parriable item in question is one of the coins, you are probably better off just ignoring it.

In this form Esther will fire steaks at you. Their pattern is a somewhat odd one. They will sail toward you, doing little loops in the process. So, if you get past one, but hang around too closely to where you had been previously, they will absolutely loop around and hit you in the back. The key here is to get some distance from them to avoid this looping pattern. Some of the steaks will be parriable, so look out for that pink beef. 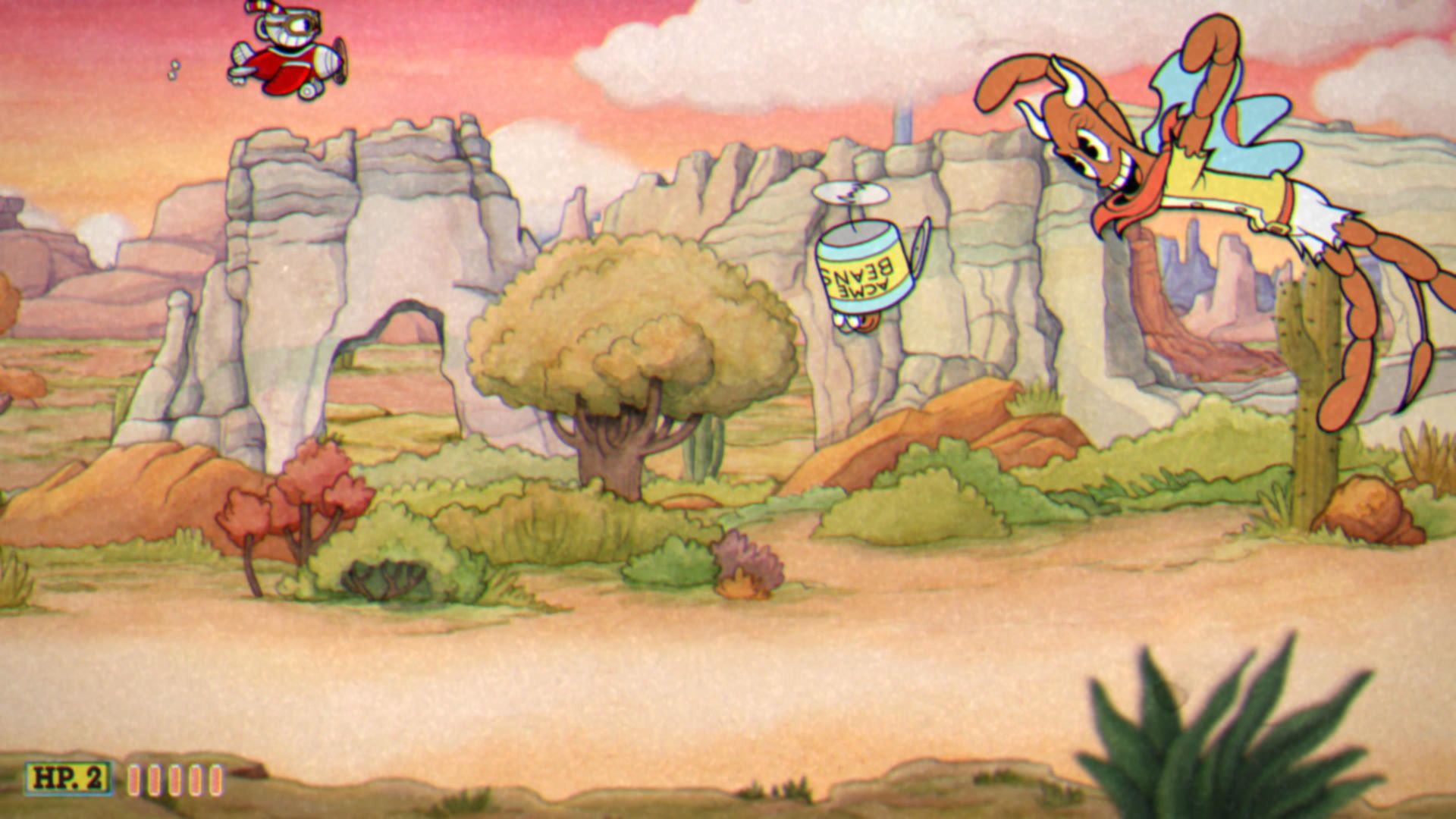 The other obstacle in your way will be the hovering cans of beans. One end will be open, the other will have a propeller on it. Try to stay on the side that has the propeller, as the beans will form a little ladder and extend to hit you if you fly over the open section. If you have the Smoke Bomb charm equipped, you will be able to use it to blow through the line of beans. Though it is probably better to not rely on this; just turn to it if you are in a tight situation. 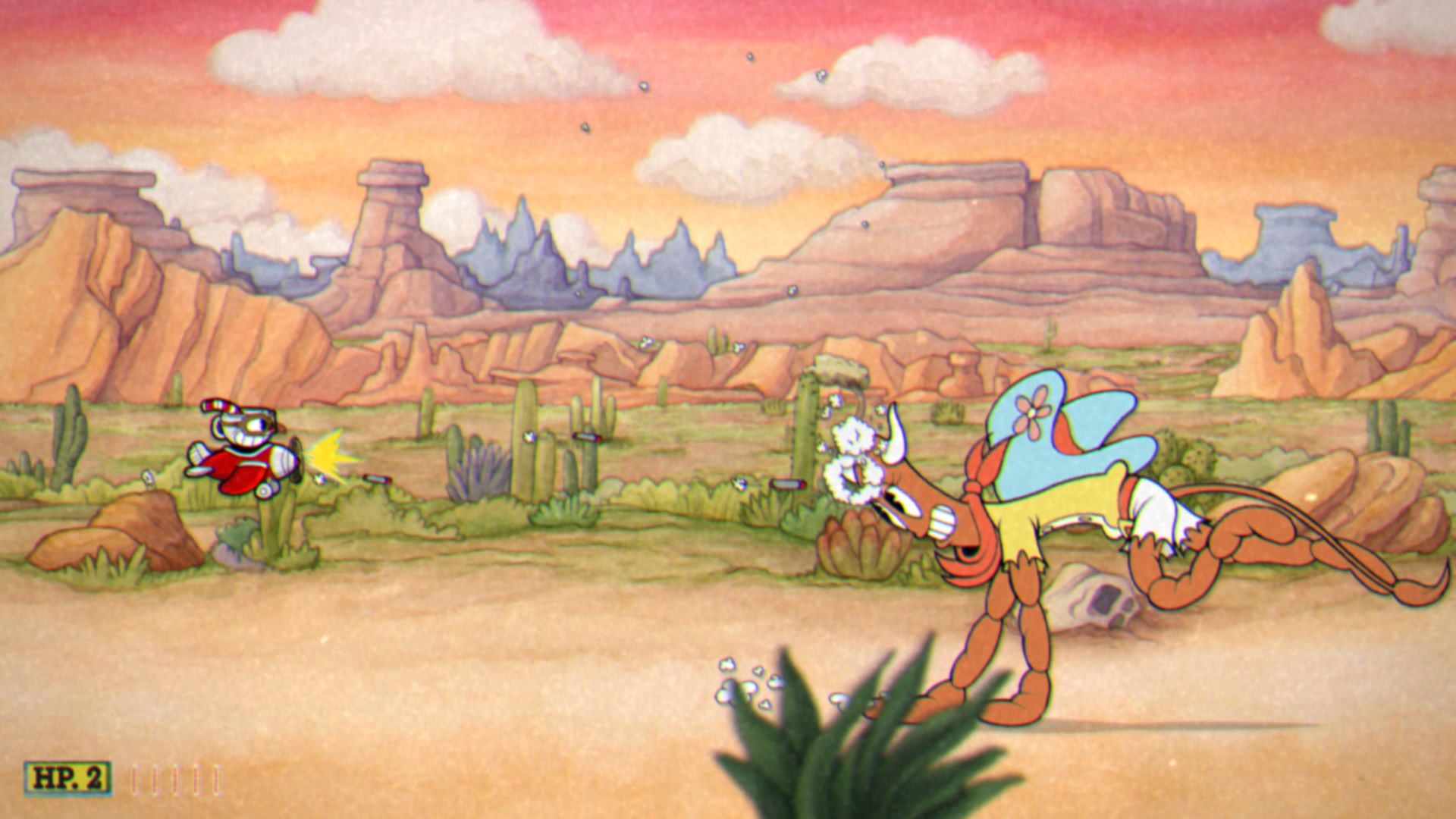 As you are avoiding steak and beans, just shoot Esther. She exclusively sticks to the right side of the screen, though she will switch between running and flying. So, if you are up above her, switch to your secondary weapon to hit her with your bombs. As long as you focus on dodging the beans and the steaks, you should make short work of ol' Esther. 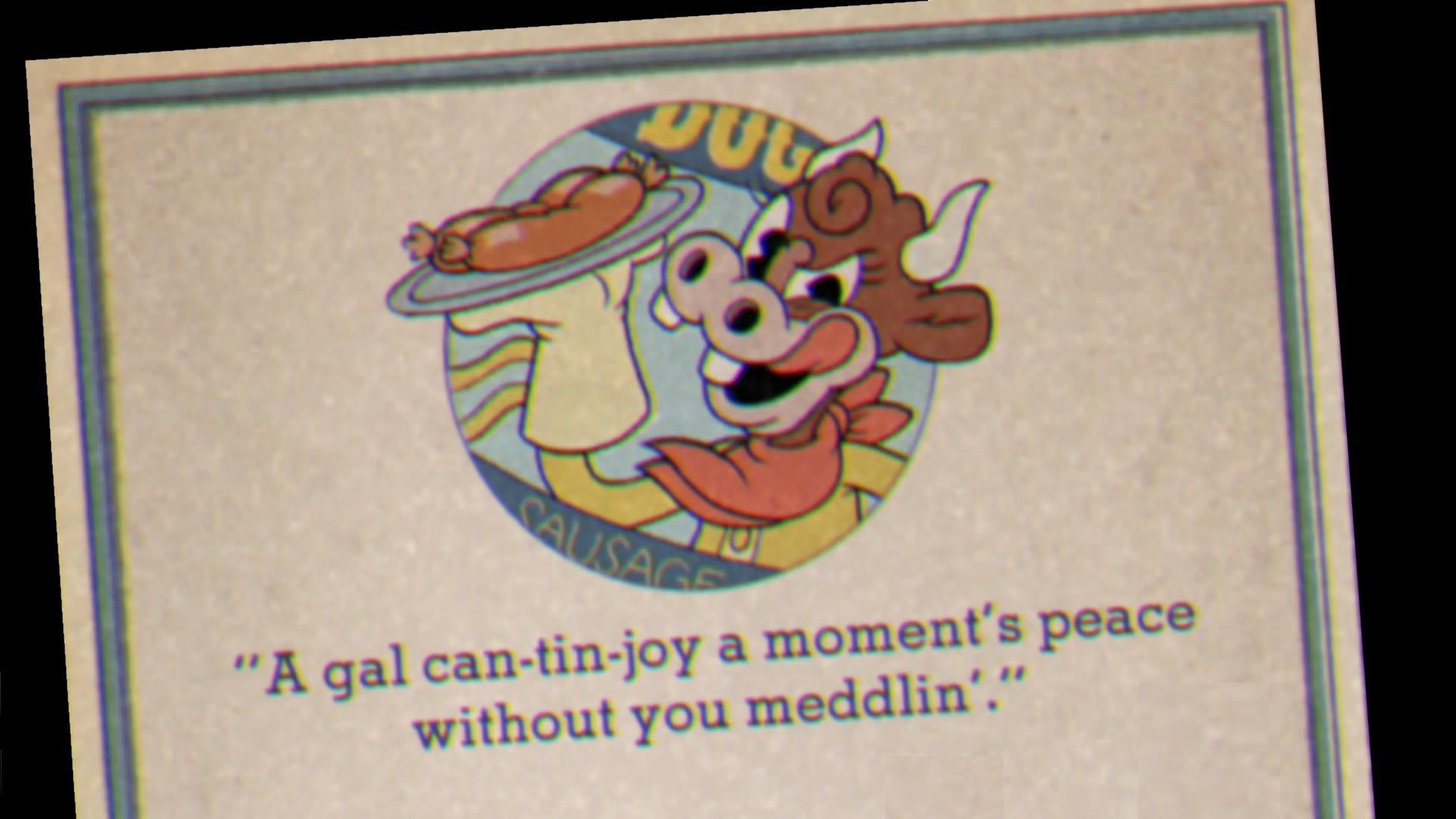 You have now successfully reached the final stage of this fight. There will be two links of sausages that will travel up and down across the screen (frequently converging in the middle of the screen). You will need to weave in and out of them by way of the missing links of sausage. All the while, you will be shooting Esther.

Esther will also be sending pepper projectiles your way in the spread shot pattern. Many of these will be parriable. So, if you are chasing that S rank, and you need some parries, these peppers will be your last chance. Just keep firing away at Esther while weaving through the sausage links, and avoiding the peppers, and you will eventually finish Esther off. 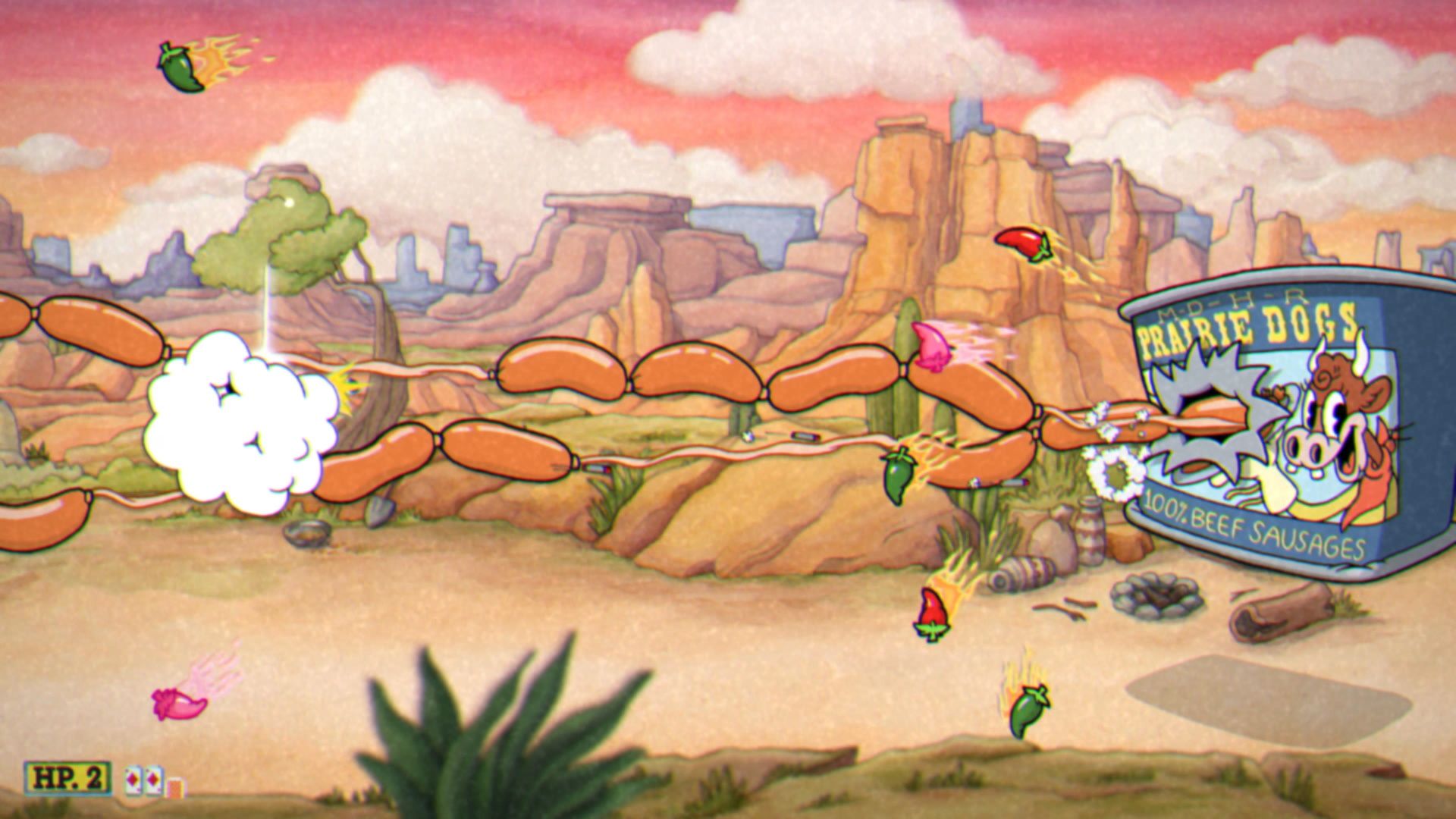 It is important to note that the Smoke Bomb charm will provide a huge benefit in this section. Every time you move through the links, use the dash button to engage the invincibility frames. The Smoke Bomb is a huge help here. 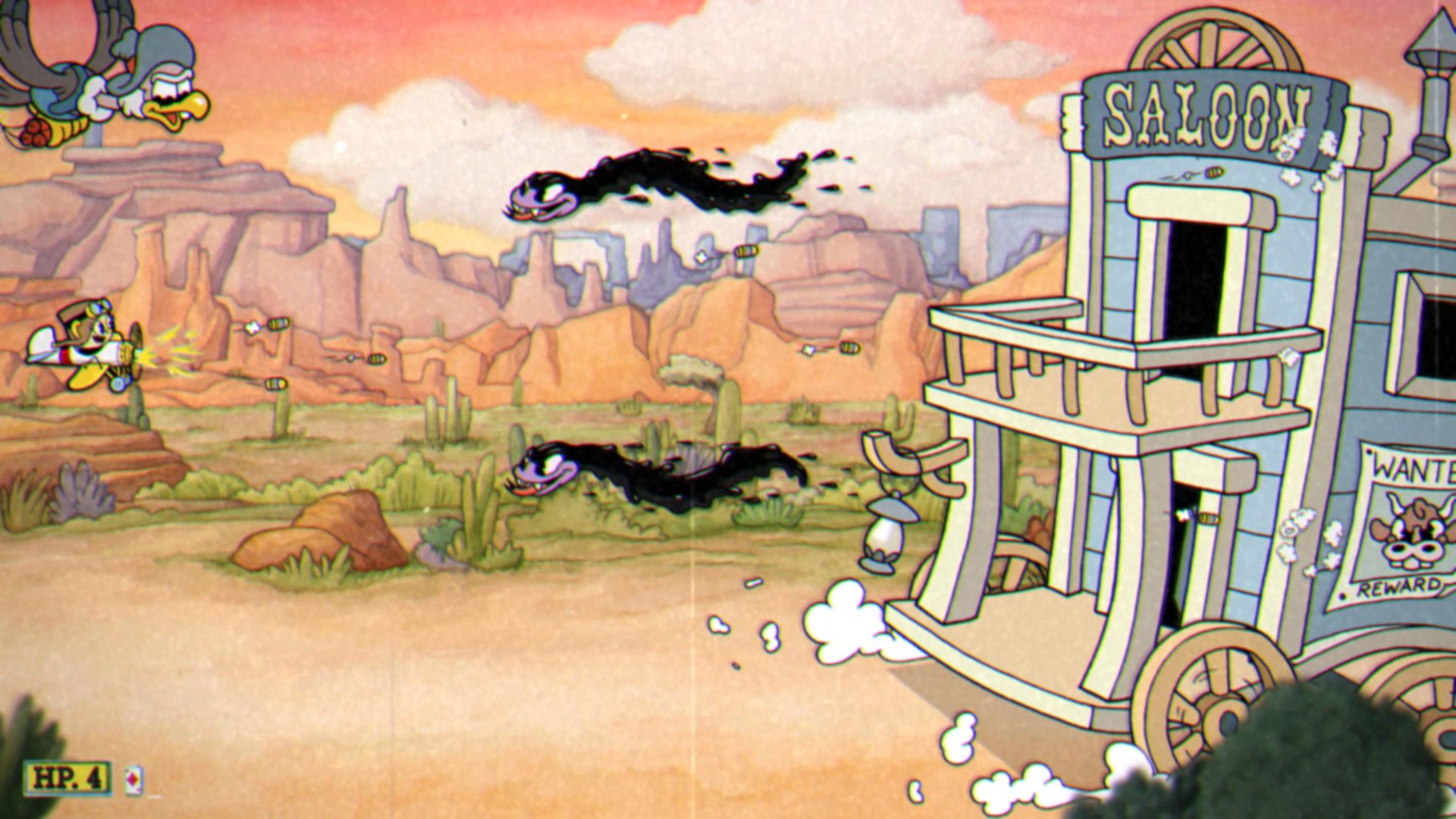 Ms. Chalice has a spread shot as her standard weapon as opposed to the beat shooter Cuphead and Mugman get. This will help Ms. Chalice hit Esther for at least some damage, even if she has to dodge out of position. So, this is a minor improvement. She also comes with an additional heart, which is a big plus. 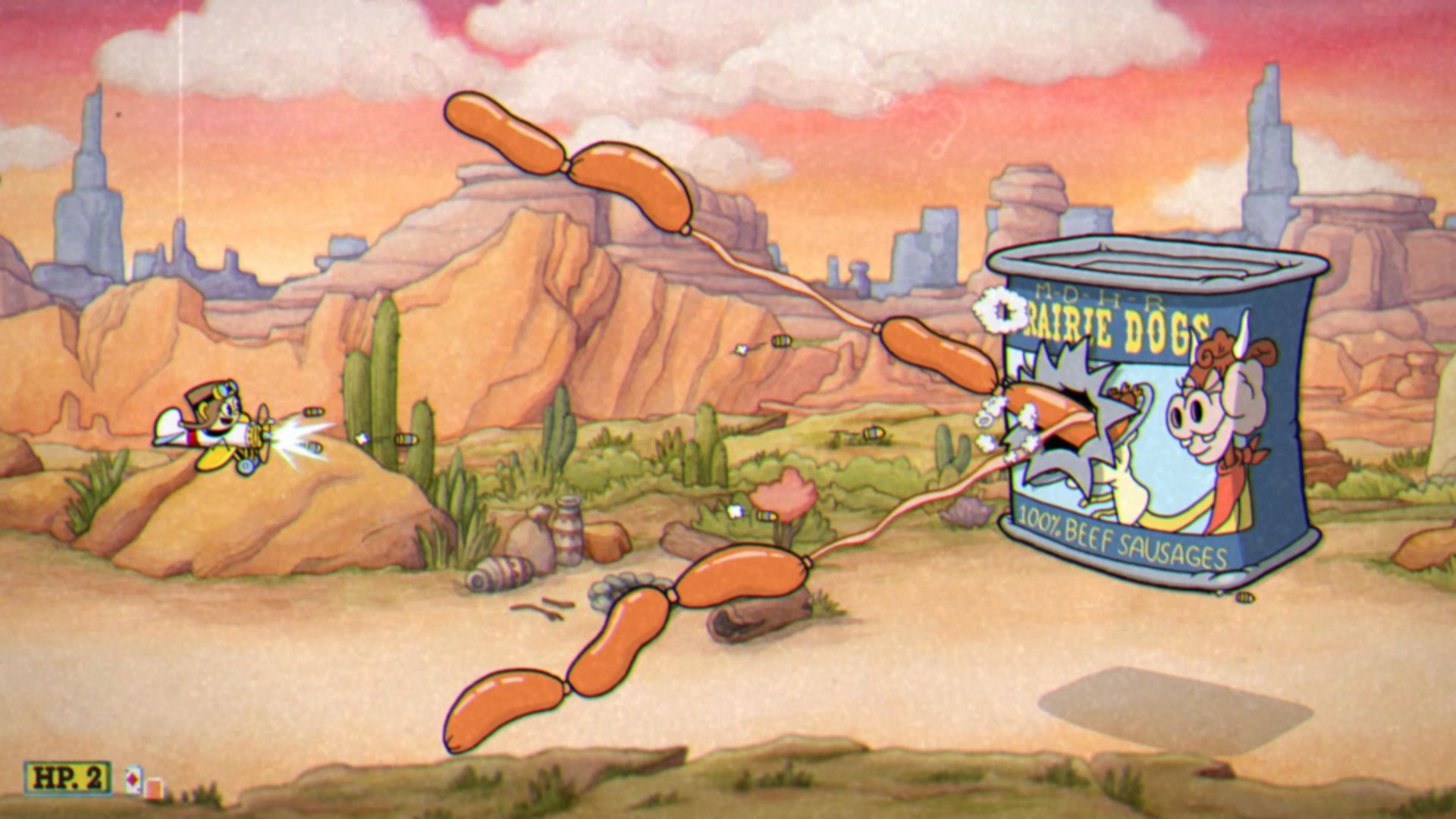 Unfortunately, since using Ms. Chalice requires coming into the battle with the Cookie charm, that means she won't have access to the Smoke Bomb charm. This hurts, as that charm is a huge help in the final phase of this fight. In that regard, you are going to have to beat Esther fair and square, as you won't be able to have the Smoke Bomb carry you. 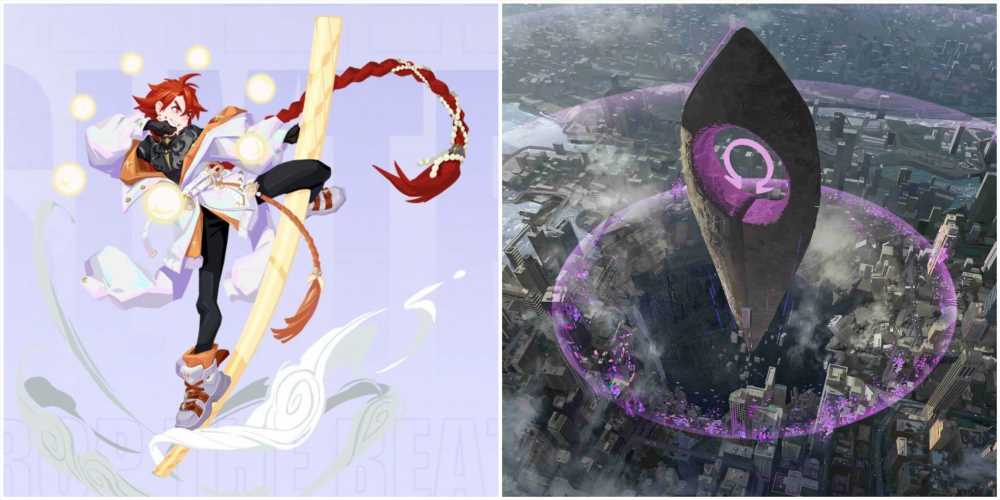