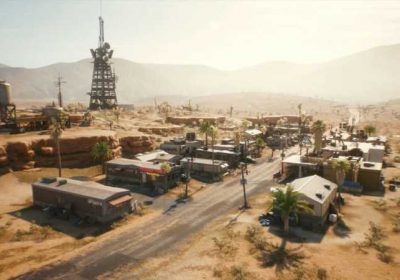 Alright, fine – the Grand Canyon isn’t technically part of Cyberpunk 2077. But there is a massive canyon on the outskirts of town, and this player discovered a way to jump hundreds of feet across it, landing safely on the other side.

In order to pull off the death-defying feat, there’s a very specific set of moves the player had to trigger. No one’s quite sure if it’s a bug or simply a perk of a cybernetically improved V but, either way, it’s pretty impressive. The canyon-clearing jump can apparently be performed through some combination of jumping, aiming, dodging forward, then jumping again – do it enough times, and you’ll have enough momentum to clear a giant chasm. The idea is that you won’t be on the ground long enough for the game to reset your speed, allowing you to run at a pace not otherwise possible. You can see the move in action below:

After performing the weird dodge-jump maneuver a few times, the player has more than enough speed to clear the canyon. They even give you a nice panoramic view of the action, courtesy of Cyberpunk 2077’s photo mode. If you’re interested in trying it out for yourself, we’d recommend watching a few tutorial videos beforehand – otherwise you’ll probably end up at the bottom of a ravine. It’s all a bit confusing, but the payoff seems more than worth the hassle.

If you’d rather pull of simpler acrobatic feats, there are several cybernetic enhancements that improve your mobility in Cyberpunk 2077. In fact, one player decided to use the double jumping and boost jumping skills to turn the game into a parkour simulator. It’s always interesting to see how players interact with the world of Night City, as it’s the perfect playground for experimentation – that is, when you’re not inundated with bugs or discovering unfinished sections of the map.

CD Projekt Red is hoping to iron out most of the issues with Cyberpunk 2077 in the coming months, and it’ll be interesting to see if this canyon-clearing jump is patched out.

NEXT: Skyrim Charcuterie Boards Include Eidar Cheese, Snowberries, And… Ectoplasm?