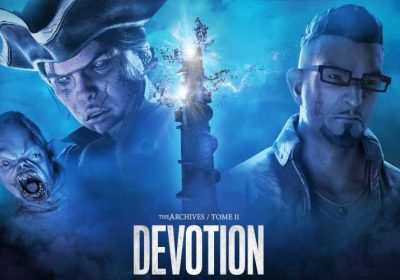 From just seven survivors and killers in 2016 to nearly 60 combined characters today, Dead by Daylight has seen a lot of growth. That growth isn’t just about adding new characters, but also about expanding on the backstories of Dead by Daylight’s existing characters, too. That’s according to developer Behaviour Interactive, which recently announced today’s Tome: Devotion will include memories about a fan-favorite Survivor.

"One of the cornerstones of that community are our LGBTQIA2+ players, who continue to elevate Dead by Daylight with their tireless passion for horror, gaming, and of course – horror gaming," wrote Behaviour in a news post to the game’s official site. "The fact that our character roster did not openly feature any confirmed LGBTQIA2+ representation was something we have been determined to change.

"Upon consulting extensively with the GaymerX organization, who shared their expertise at integrating LGBTQIA2+ themes into established games, we felt confident in our chosen direction. Today, we’re pleased to confirm that Dead by Daylight can officially celebrate the game’s first gay character: David King."

David King was added back in 2017 as part of the Chapter 5 DLC. Behaviour describes him as "a hot-tempered ruffian with a penchant for a good scrap, whose time as a debt collector brought pain both internal and external," and "a man of many hats, each one roguishly dapper — lover, fighter, mechanic, bouncer, impromptu beachwear model." He's since become a fan favorite and sits comfortably in the top 10 of most-played Survivors.

Today's Tome: Devotion will contain memories of David King's life from before he was taken by the Entity. Those memories will explore a "deep personal connection" that "expands the scope of his backstory."

Some fans are happy to hear of King's coming out, but several are upset that this seems to be an about-face for the character, noting previous lore surrounding King mentions a past relationship with a woman. Expect Tome: Devotion to address this and more in today's update.

In other Dead by Daylight news, Behaviour might just be working on a Dead by Daylight dating sim. A trademark titled "Hooked On You: A Dead By Daylight Dating Sim" seems to indicate that Behaviour Interactive has some interesting plans for its asymmetric survival game.