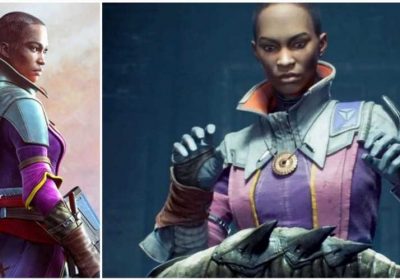 Ikora Rey is cool. She is calm and powerful; an iconic member of the Destiny 2 cast and one of the loudest voices in the fight against the Darkness. But what do we as players know about her? To be honest, not much. Especially before her time as the Warlock Vanguard, her life is shrouded in mystery — one that she no doubt is intentionally making.

Besides the incredible feats we see her perform throughout the playable game, Ikora has been a household name for Guardians throughout the solar system for decades. There are some rumors, some facts, and some myths about the legendary Guardian, and here are a few things that have not been widely talked about in the game.

Ikora Rey was initially voiced by Gina Torres (Zoe Washburne in Firefly), but was recast just before the Season of the Splicer by Mara Junot. It was never officially announced by Bungie that the switch had taken place, with the first online clue being Junot's personal Twitter account quote-tweeting a Game Informer article about a week after the season was launched.

To this day there is still no public reason for the change, but with Gina Torres' wide name recognition, it could have simply been that Bungie couldn't afford to keep the actress in the slot.

9 Her Past In The Crucible

Ikora was the first Guardian to achieve a 25-game win streak in the Crucible, before becoming the icon of the Vanguard we know now. To this day Ikora has a fondness for the Crucible, calling it her home in the Last City.

While we can assume that not all Destiny 2 PvP strategies can translate to the lore of the world, we do know Ikora was a shotgun main, wielding Invective (the original game's Exotic shotgun) to dispatch her enemies.

8 Her Past On The Battlefield

Speaking of her time before the Vanguard, Ikora was a reckless and skilled Guardian, both in the Crucible and out on the battlefield. She was so scary, in fact, that there was a rumor she could turn people into frogs. In order to circumvent this, she traveled throughout the inner solar system gathering information and trying to outrun her reputation.

During this time, it is rumored she began dabbling in Thanatonautics, the act of a Guardian purposefully dying to try and gain insight into the universe before being revived by their ghost.

As Osiris’ student, Ikora was well known and respected. As her mentor’s obsession with the Vex increased, she began to control most of his duties as the Warlock Vanguard — which was probably a great way to practice for the future.

Eventually, she came to him with the knowledge that the Speaker had appointed her as the new Warlock Vanguard and had officially exiled Osiris. Instead of becoming angry, Osiris simply asked Ikora if she had learned confidence, to which she responded, "Yes, but not from you."

Not only is Ikora Rey the Warlock Vanguard, but she is also the founder, leader, and head of research for The Hidden. Along with 12 other known members, The Hidden is the Vanguard's unofficial spy network, dedicated to gathering information on The Last City's enemies.

As far as we know, the only entities outside the Vanguard who know of The Hidden are the Cult of Osiris and Mara Sov herself. Let's hope Mara at least stays on our side.

5 Her Role In The Vanguard

While Ikora and Zavala seem more similar than the former Hunter Vanguard Cayde-6, she actually represented the middle ground between the other two. Her focus allows her to be an excellent strategist and decision-maker, leading her to take a more dynamic role in the war against the Darkness.

For example, when Cayde-6 was murdered at the hands of Uldron Sov, she refused to sit back and do nothing — like she accused Zavala of doing. He professed he was doing his duty in protecting The Last City by remaining there, but she did not see it that way. When you, the Guardian, came along and expressed a desire to see the Awoken prince pay, she was all too happy to help you. That way she could take revenge, while still maintaining her presence at the Tower.

Ikora Rey is the only person to ever defeat Lord Shaxx in the Crucible, almost killing him in the process. This is why she doesn’t wield the Arc subclass Stormcaller anymore; she thinks it is too dangerous. And rightfully so.

In various promotional footage, we see Ikora dabbling in Arc, but throughout the actual gameplay, we only ever see her wielding the Voidwalker subclass. This does not break continuity though, as we Guardians are able to switch our subclass at will as well. It just goes to show that as strong as Ikora is right now, she is not even fighting with her full might.

Ikora and her ghost, Ophiuchus (named after the constellation), do not get along well at all. The rumor is that as Ikora began practicing Thanatonautics before becoming the Warlock Vanguard, Ophiuchus became more and more frustrated. That was the beginning of the end of their friendship. Ikora would eventually cease communicating with her ghost completely, and in turn, Ophiuchus eventually stopped trying to get her to speak to him and simply observed.

The two only started to repair their relationship once Ikora reunited with Osiris on Mercury, after defeating Panoptes, Infinite Mind. On their way back to the Last City, Ophiuchus was shocked that Ikora turned to him and asked what he thought of the venture. It had been 61 years since the last time she spoke to him.

We don’t really know how old Ikora is. It is documented as previously stated that she spent 61 years without talking to her ghost, and we know this started before her time as the Warlock Vanguard but after her stint as a champion of the Crucible. As far as we know it is impossible for a child to become a Guardian, so Ikora must have been at least 18 when she became one.

Her actions throughout the Crucible and into her time spent wandering the solar system scream "young-adult life crisis", so we can assume the 61-year silence began sometime in her early 20s, making her at least 81-83 years old.

1 Her Friendship With Eris

Despite her intense nature, Ikora is one of the few people in the Tower to show an open mind when it comes to learning about the nature of the world. She alone listened to and believed Eris Morn upon her escape from the Moon, and inducted her into The Hidden.

Because of Ikora's trust in Eris, the Vanguard was able to learn more about the Hive and their base on the Moon than they thought previously possible.