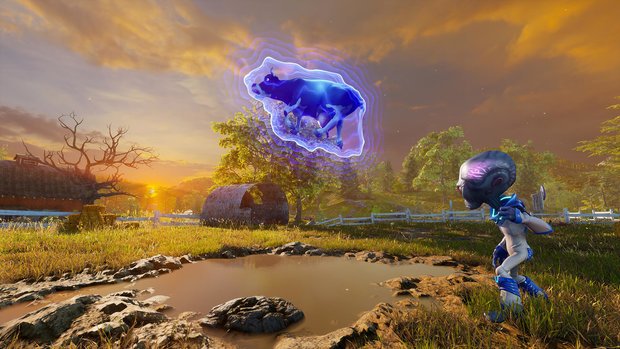 Strangely enough, the game also retains the voice work and music of the original, which creates this jarring quality disconnect. If I was taught anything during my three semesters of film school – it was that audio is always more important than visuals – the opposite is true here, and it’s a fairly obvious black mark on the experience. Whilst I understand they want to be true to the original – and this is an easy corner to cut – it’s very crackly and noticeable even if you’re a first timer. I didn’t know they were retaining the old sound and instantly twigged, which wasn’t a good sign…

Ultimately, Black Forest Games is doing a great job of being faithful to the original Destroy All Humans – this will be an instant nostalgia pickup for many based on looks alone. Unfortunately, it’s hard to champion the game thanks to clear areas where the ball has been dropped.

It’s got its Sunday best on, but it’s not had a wash behind the ears, and the rigid A.I and voice work crack the promising veneer. Hopefully, this will be remedied after some feedback, but if not this might be a bit too by the numbers to recommend to newcomers – they’ll quickly start to tire with the lack of tangible difficulty.

Watch out for Destroy All Humans! When it lands on PC, PlayStation 4 and Xbox One in 2020.