Do An Illegal Crane Kick With The Cobra Kai Fortnite Crossover 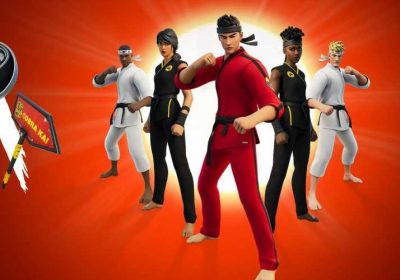 The latest IP to come to Fortnite is Cobra Kai, bringing with it some karate moves as well as gis for Eagle Fang, Miyagi-Do, and Cobra Kai itself.

Cobra Kai's newest season has just started streaming on Netflix, and to celebrate it has teamed up with Fortnite to bring the crane kick and karate gis over to The Island.

The crossover is currently live in Fortnite and has ten different outfits to buy, as well as three bundles containing emotes, back blings, and two pickaxe. Interestingly, the crossover doesn't feature any of Cobra Kai's actual characters and instead opts for having some generic Fortnite characters in each of the dojo's gis.

There are nine new characters overall and each of them can have either of the three dojo's gis, including Eagle Fang Karate, Miyagi-Do, and Cobra Kai. The tenth character is Jonesy, who is about as close to Johnny Lawrence as we're going to get from the crossover. Each of the characters costs 800 V-Bucks overall.

Moving past the individual characters are three different bundles. One bundle, costing 2,000 V-Bucks, is called the "Karate KO Bundle" and features five of the female fighters. The other bundle, named "Dojo Showdown" features Jonesy and four other male fighters for 2000 V-Bucks.

If you want to go one step further, there's also the Cobra Kai Gear Bundle, which features the back bling, pickaxe, emote, and spray. The Crane Kick emoji plays the first line of "You're The Best Around" from the first Karate Kid movie. The back bling is called "Teachings of Miyagi" and features a rising sun design that displays various karate techniques in the middle.

If you're more of a Cobra Kai than a Miyagi-Do, there's also the Cobra Coin back bling, which features the Cobra Kai logo on it. Finally, there are two pickaxes, one featuring a sign pointing towards Cobra Kai, and a weapon with a snake-like design. Where's the Eagle Fang love? This bundle will set you back 1,500 V-Bucks.