Home » News » Doom Eternal E3 Hands-On: The most satisfying shooter of the year – by a long way

Doom Eternal E3 Hands-On: The most satisfying shooter of the year – by a long way 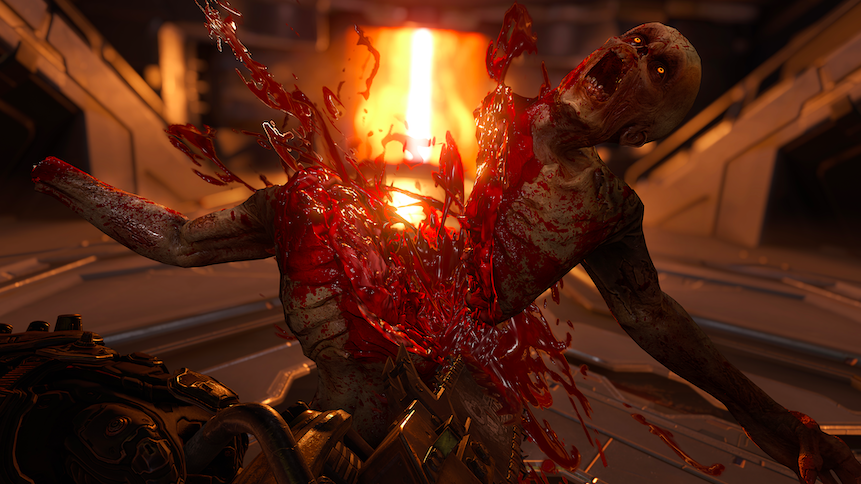 If you need armor, you have to burn demons with your flamethrower and then finish them off with your gun. If you want ammo, you need the chainsaw. Health is still retained by glory kills, but by mixing in the rest of these resources (and making them scarce) the developers have created magnificent mayhem.

Another buzzphrase I heard often concerned the ‘Destructible Demon System’ which adds another layer of tactics to the combat. As well as having more demons in general – say hello to the Arachnotron, the Pain Elemental and the Maraudare to name a few – iD has tried to reinvent how you deal with them.

Focusing on weak points is more important than ever – shooting off guns or hurting a foes mobility can quickly change the tide of a fight for your life – and there’s plenty of those. 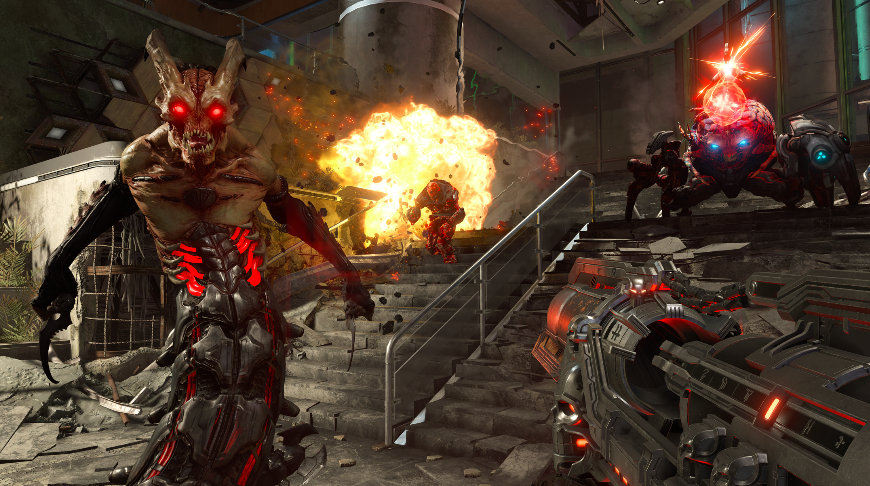 You absolutely cannot stop moving in Doom Eternal, but by overwhelming you with weapons and new abilities, your brain naturally starts crying as you have to think about what enemy warrants what weapon or ability – if you don’t cut the right wire and solve the puzzle, your battle plan immediately starts to crumble.

Even so, the variety of enemies is also worthy of a compendium – you need to learn how each of them tick so they don’t surprise you. You’ll learned this the hard way when you underestimate some of the less grotesque enemies – bigger doesn’t always mean badder in Doom Eternal.

It’s truly stunning stuff – it creates more incentive to enjoy the downtime in Doom. If I’m being truthful, there were points when the original game waned as the space corridors started to blend together and I became lazy, too used to the satisfying crunch of one weapon – I’d fell into a formula. 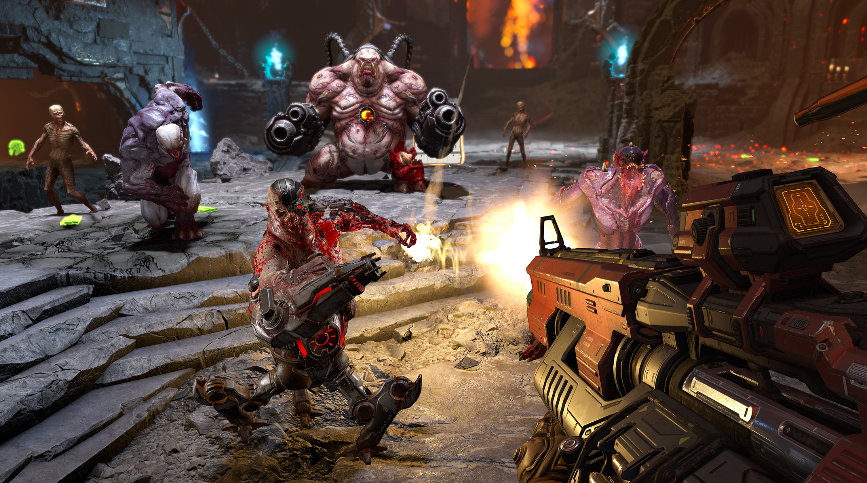 It would have been too easy for ID to simply create a set of new maps and give people more Doom, but the genius of Doom Eternal is that it doesn’t settle for that – it forces you to constantly reinvent your lazy formula as you play, and punishes repetition. This game will chew you up and spit you out until you abide by the rules.

Another ability that changes the game dramatically is the dash, which alongside a healthy double jump and the ability to swing from poles is part of a clear effort to bring some much-needed verticality to the game.

Chaining together movement tech was so much fun it made me think of Sunset Overdrive, which, whilst on the surface appears to be a silly comparison, when you think about it its very much intertwined with Doom Eternal due to its combo platforming and gunplay, albeit from a third-person perspective. ID’s sequel feels very much like an arcade game this time around, which is a surprising match for the gameplay. 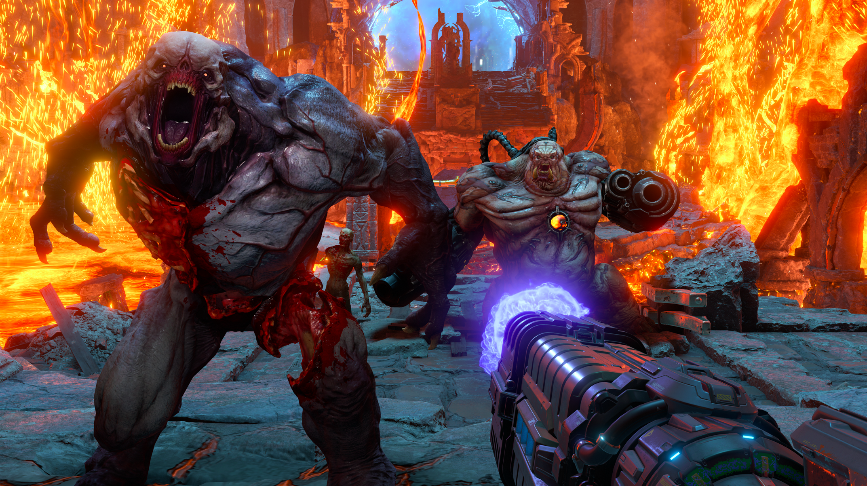 There are platforming sections but also some that mix in with the combat – on one occasion I leapt from a rock wall I was climbing, dashed in mid air and then used the super shotgun to hook myself onto a floating demon, blowing its brains out in one fell swoop. If that visceral anecdote gives you a tingly feeling – Doom Eternal is going to make you very happy.

This is all backed up by the new engine which was absolutely gleaming on the PC station I was playing the game on – crisp character models and depth of field effects elevated the graphics beyond the scope of the original – it’s not just a pretty face though – the glory kill and melee animations have been reworked and updated – I was ripping arms from demons and shoving them in their eyes and my personal favourite – spiking an enemies eye out with my wrist blade via the poor soul’s throat.

Whilst I never really cared too much for the narrative of Doom, there appears to have been an effort to scope out something villainous in this one.

The missions I played on Mars didn’t feature any of this (it was a continuation of the E3 trailer mission where the Doomslayer drags a man by his keycard) but there was a trailer shown which featured what appeared to be a new kind of race – human-adjacent beasts in castles. 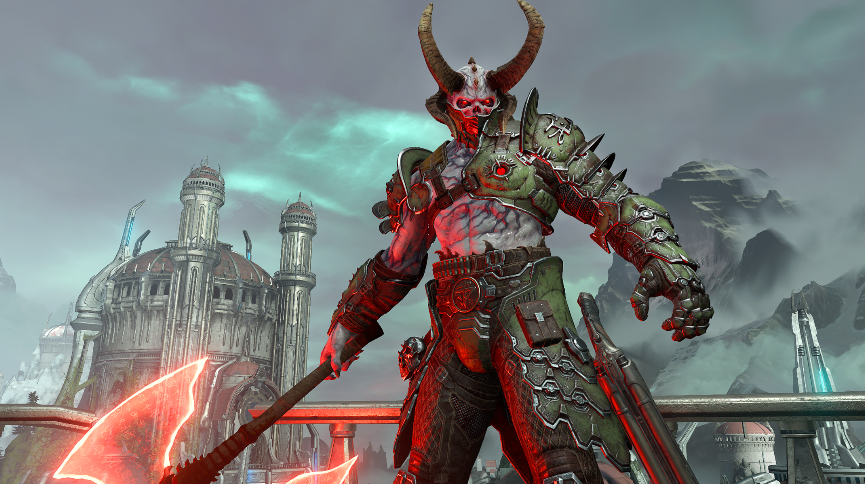 There was a clear medieval gothic style to the locations, and it made me long to unravel Eternal’s secrets, with its peculiar ghost kings and hell dogs. At any rate, it’s better than focusing just on Mars.

And how could I forget, this is all soundtracked by the metal genius Mick Gordon and his ethereal drums pounding away as you turn poor demons into red mist on crumbling red planet islets.

A cacophony of pure onomatopoeia, Doom Eternal is shaping up to not only develop upon the success of the original but reinvent the wheel entirely – throwing logic and tactics and puzzle-solving into the combat, but in such a careful way that it doesn’t feel overbearing – it feels totally fucking awesome. Get ready to have your mind melted when Doom Eternal lands later this year. 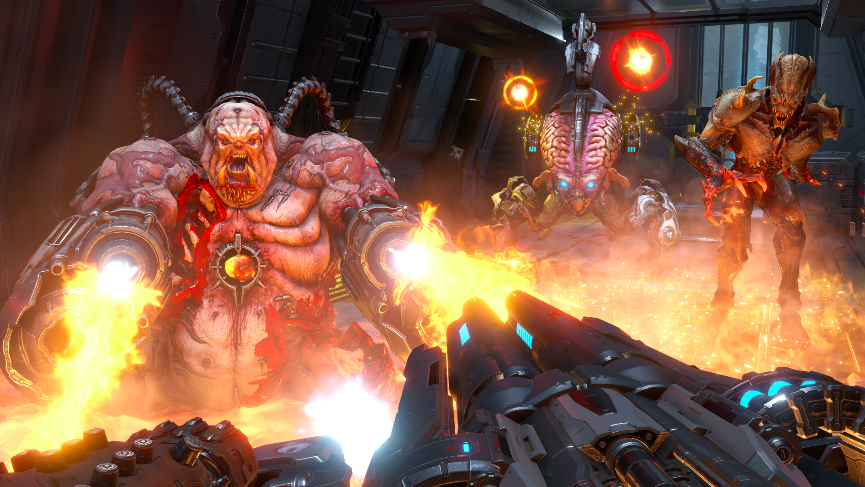